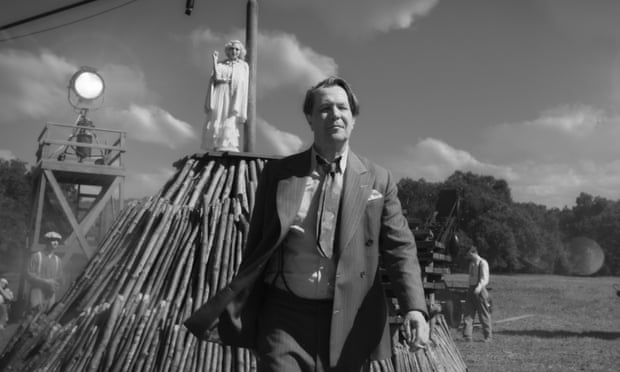 1940. RKO Studios in an act of desperation has given 24 year old Orson Welles carte blanche for two movie pictures. In turn he has turned to washed up screenwriter Herman J Mankiewicz to dry himself out at a ranch in the desert and ultimately turn in one of the greatest scripts of all time, that which would become Citizen Kane.

David Fincher’s film retelling this event, and the preceding life of ‘Mank’ (Gary Oldman, pretending to be 42 or younger), is a combination of ‘a love letter to Hollywood’, a more honest look at its underbelly, and a character study of a forgotten great.

While Fincher’s passion for this era is unsecapable from the get-go, the enthusiam can be at times a long way from infectious. As a relative film boffin I can take passing interest in the representations of Irving Thalberg or Louis B Meyer, though those with less curiousity may be less forgiving.

Interest picks up for certain scenes and witty exchanges from the erudite Mank, though it never gels into a whole in a screenplay the man himself would be proud of. One political thread is particularly disassociating, only occasionally engaging to the viewer or relating back to the writing of Citizen Kane. The film also starts slowly and smugly expecting us to immediately invest in these chattering screenwriters without much reason to, inducing an ennui the picture never fully escapes from.

Things pick up greatly when Amanda Seyfried appears as Marion, an inspiration to Mank for the love interest in Citizen Kane. She shows an ability to both match and surpass Oldman in a tête-à-tête, all the white embodying the marooned starlet so common of the age.

The black and white choice for the film is also a bold if somewhat inevitable one. Fincher does do great work in refashioning some of Citizen Kane’s more famous shots, and in his conjuring of 30s Hollywood can be seen some of his best cinematography yet.

Yet ultimately, Citizen Kane is a favourite form film critics and aficionados. It has never had wide popular appeal, which makes it of even greater worth to those who love it.

Fincher (and his late father Jack, who wrote the script) are clearly in this cadre of adorers for what was long regarded by a survey of Sight and Sound critics the greatest movie of all time (since overtaken by Vertigo). Ultimately the film does a service in resurrecting the work of Mank, yet also presents a self indulgence that can be at times suffocating.