Makala, the new film from French documentarian Emmanuel Gras, is an elegiac, lyrical journey into the heart, soul and determined resilience of a young charcoal producer in the Democratic Republic of Congo. Kabwita is a 28 year old Congolese man who, with his wife Lydie and their three children, lives in poverty. They rent a […] 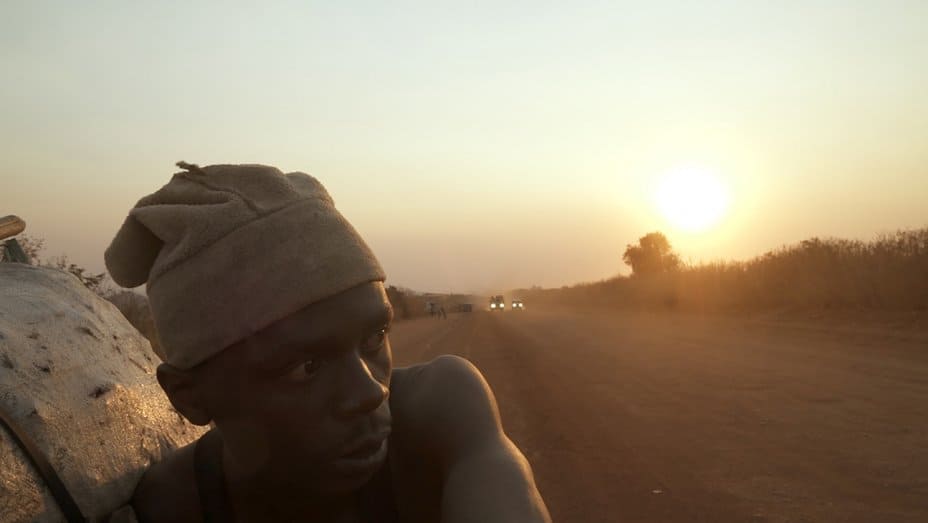 Makala, the new film from French documentarian Emmanuel Gras, is an elegiac, lyrical journey into the heart, soul and determined resilience of a young charcoal producer in the Democratic Republic of Congo.

Kabwita is a 28 year old Congolese man who, with his wife Lydie and their three children, lives in poverty. They rent a small, ramshackle home in the bush, and although their accommodation is basic, the full weight of their situation is clearly communicated when we see Lydie preparing a meal of bush rat to feed the family.

Kabwita’s dream is to build his family a home, a small place they can call their own and grow orange and mandarin trees. It’s a modest aspiration, and something the young man is tirelessly working towards, producing his own charcoal and travelling to the nearest city, 50 km away, to sell at market.

We join Kabwita atop a hillside, and as the strong winds blow around him, he begins to chop down a massive tree with a trunk so thick, the endeavour seems futile. But, between the splintering wood, grunts and dull thud of the axe, the tree eventually comes crashing down. He then cuts the tree down to size, digs an oven in the ground, buries the wood, covers it and sets it to burn slowly over the course of the next two weeks. When he returns he has his charcoal, but now must sell it to make his meagre living.

So begins the heart of Makala, as Kabwita precariously fixes the over-stuffed, worn bags of charcoal with cracked elastic to a rusty bicycle and sets off on a 3 day journey to market, rising before dawn and pausing only to eat and sleep.

Gras has stripped his documentary down to its minimal components, and yet the film feels epic in its scale. There is something so deeply moving in what Kabwita becomes symbolic of. From his poverty to his humble dreams and the determination to carry on, he embodies perseverance, resilience, strength, love and the lengths we go to provide and survive.

It becomes an exercise in itself to watch Kabwita inch his bicycle, buckling under the weight of its cargo, up slight inclines and down perilous roads as trucks, jeeps and cars barrel past him at high speeds. The sweat on his brow, the quiet, strained grunts are of a man exhausted from working every muscle in his body and digging deep into his spirit to carry on. And carry on he does.

What makes Makala such a roaring achievement is Gras’ ability to present the minutia of Kabwita’s routine on such a grand, emotive scale. He captures the tension in seemingly tiny moments, and the quiet apprehension behind Kabwita’s soulful eyes. The fluidity of the camera, which is always moving with Kabwita, provides a real intimacy and the score, simple, powerful cello, is never intrusive, giving the documentary a cinematic quality that heightens the raw beauty of human endeavour.

All of it culminates when Kabwita takes refuge one night, after a day of selling his charcoal, inside a makeshift church. After the sermon, between the plastic chairs and dusty carpets, the congregation descend into a frenzied trance of song and prayer. It is an outpouring of emotion, feeling and release that is revealing and deeply emotive. Spirituality mixes with hopeful desperation and exhaustion in a moment of vulnerability, as those in attendance pray for strength and for a chance to earn enough of a living that they might be able to provide for their families.

Makala is a human film that forgoes a stricter documentary approach. In its simplicity, it is beautifully expressive and finds the pumping heart of its power in its visual detail. It will move you to your very core.