Richard Linklater’s latest film is a sequel, of sorts, to Hal Ashby’s 1971 great, The Last Detail, which starred a young Jack Nicholson. That film was concerned with questions around the ideas of legacy & impermanence, and Last Flag Flying continues this tradition, whilst also being shot through with a hit of pure Linklater in […] 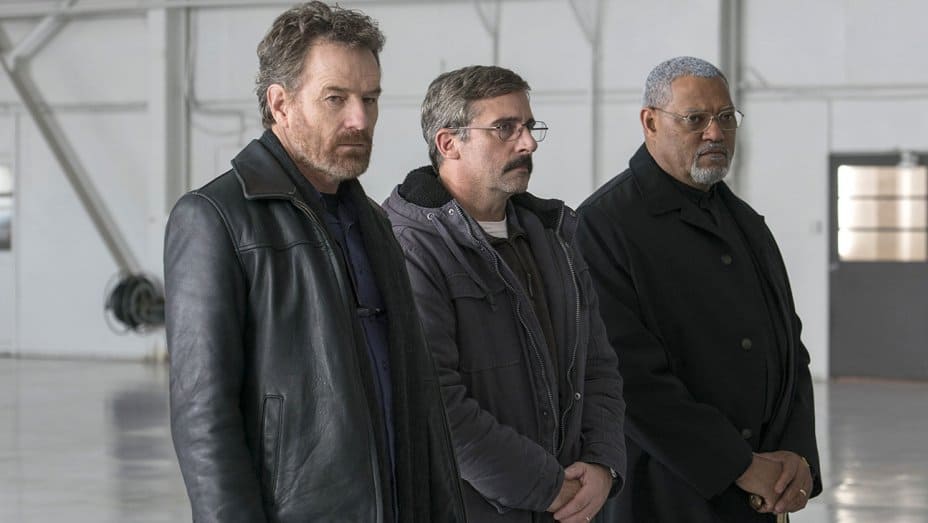 Richard Linklater’s latest film is a sequel, of sorts, to Hal Ashby’s 1971 great, The Last Detail, which starred a young Jack Nicholson. That film was concerned with questions around the ideas of legacy & impermanence, and Last Flag Flying continues this tradition, whilst also being shot through with a hit of pure Linklater in the form of a hangout film.

Ashby’s film centres on two US sailors transporting a third to a military prison and Linklater’s film shares a similar plot core. This time round, ex-Marine buddies Sal Nealon (Bryan Cranston) and Richard ‘Dick’ Mueller (Laurence Fishburne) accompany Larry ‘Doc’ Shepherd (Steve Carell) to attend the burial of his son Larry Jr., killed in action whilst serving in the Marines during the recent Iraq conflict. The central-trio served together in Vietnam and has not seen each other for nearly three decades. The trio are told the true nature of Larry Jr’s death by his best friend, Washington (J. Quinton Johnson), who has returned home to escort his body. It is this revelation and subsequent decision that is the turning point for the film, with Linklater keeping the audience at arms length from the horror Shepherd has to go through when looking at his sons body, but leaving us under no illusion as to what he is experiencing. Carell’s performance in this scene is stand out, brilliantly dealing with the horror of what he is currently seeing, mixed in with the lies he has to handle from the men in charge. He speaks only a few words, but you feel every single one.

The decision to take these characters on the road provides a great showcase for their considerable talents, and although at times it does feel like they’re bordering on the very edge of hammy (Cranston in particular), Linklater is able to keep a lid on proceedings. All of the actors are able to develop their characters through dialogue that is witty, profane and at times philosophical. You are under no illusion that despite the world changing their appearances and outlook, these three ex-Marines are still friends. The only time the film is a let down is during a couple of comedic set pieces that tonally jar with the somber mood of the film, but thankfully none of them go on long enough to sink the film. One in particular that does hit the mark is Cranston realising that Eminem (Without Me comes on the radio) is white and not black, a moment of wonderfully realised comedy playing out between Cranston and Fishburne.

Special mention should be given to Steve Carell for his portrayal of grieving father, Larry Shepherd. Carell is able to impart emotion and depth into his character through his body language, and the careful delivery with which he speaks every word and at times comfortably out-acts Cranston and Fishburne, who occasionally appear to be from a different film. Carell has long spent his career as a fine comedy actor but it is his recent roles in high class dramas such as Foxcatcher and this film that really do single him out as one of the finest but underrated ‘proper’ actors in Hollywood.

Linklater has made a war film removed from the violence and horrors of war and ensconced it into an American Road movie. The places they visit do not hold much sway over the story rather than the gist of the central-trio’s conversations. They joke, squabble and reminisce about a variety of situations from their time in the forces to the merits of tying Larry Jr’s coffin to the roof of Nealon’s car. The film is bleak to look at, utilising a palette of greys and blues along with effective ‘natural’ strip lighting to highlight the starkness of the places they’re calling home for the few days they’re together. This is not to say that the film lacks heart however, one moment where the older gentleman bond with young marine, Washington where they discuss Shepherd losing his virginity is both sidesplittingly funny and showcases expertly Linklater’s talent to get characters to reveal themselves through dialogue and silence.

The film takes a broadly liberal stance on patriotism and the military apart from a slightly more conservative approach towards the end, but this scene says more about friendship and support than anything else in truth. Overall, the film is not a gung-ho, flag-waving, ooo-rah piece, it is thoughtful and offers no easy answers, only uncomfortable truths surrounding the futility of war and what it means to do your duty.