Perhaps unsurprisingly, refugees and migration have been popular topics with filmmakers in recent years. Indeed, over the last 12 months there have been a number of excellent projects, notably The Other Side of Hope and Human Flow, which have reflected upon the struggles and experiences of migrant travellers. With Jupiter’s Moon, Hungarian director Kornél Mundruczó […] 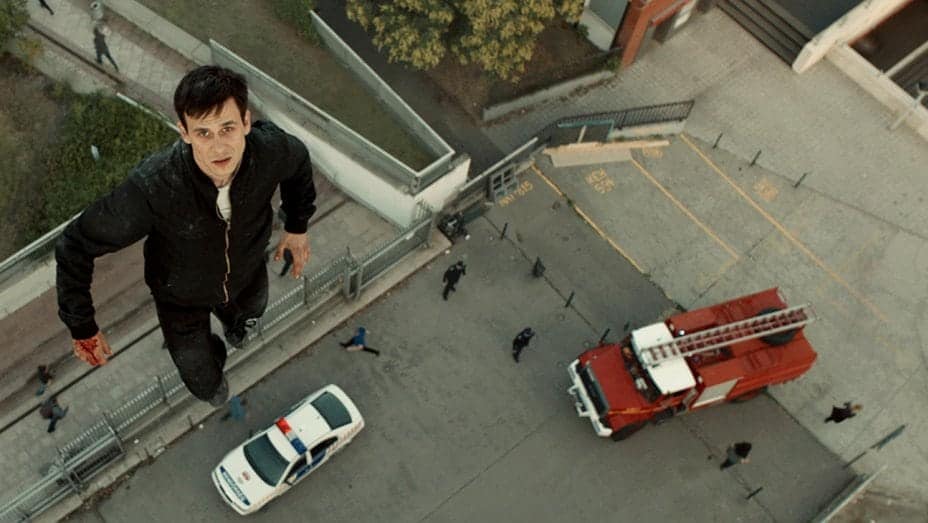 Perhaps unsurprisingly, refugees and migration have been popular topics with filmmakers in recent years. Indeed, over the last 12 months there have been a number of excellent projects, notably The Other Side of Hope and Human Flow, which have reflected upon the struggles and experiences of migrant travellers. With Jupiter’s Moon, Hungarian director Kornél Mundruczó creatively attempts to add to this discourse.

The film opens on the border between Serbia and Hungry, where a number of Syrian refugees are trying to cross by boat. While on the water, they are spotted by border enforcers and among the migrants shot at is Aryan (Zsombor Jéger). Wounded, he mysteriously discovers that he can levitate, and is soon smuggled out of the refugee camp by Dr Gabor Stern (Merab Ninidze). Dr Stern is in debt after performing an unsuccessful medical operation, and sees Aryan’s powers as a way of earning money, all the while trying to evade camp director Laszlo (György Cserhalmi).

The film in essence is a hypothetical question: what if God put an angel on Earth and he happened to be a refugee? Despite having mystical and unexplained powers, Aryan is still a victim of circumstance. Like millions of people, he is pushed from one country to another, housed within temporary camps, and even when he is smuggled out is manipulated for other people’s gains. The ability to fly for the most part doesn’t help him. If anything it only intensifies Laszlo’s pursuit of him.

On paper, the idea of giving a refugee the power to fly is more profound than you may expect. Migrants are commonly held captive by walls, fences & borders, and the thought of being able to fly above them gives Aryan a freedom that contrasts with his restricted existence.

The issue is that the film does not stay true to its central themes. A terrorist attack that defines the final third is particularly misjudged. It may motivate a more exciting final act, but can only be seen as an irresponsible inclusion. For a film that sets out to shine a light on contemporary migration, it is strange that an association between migrants and terrorism would be made. Its inclusion is indicative of how ideas and plot points are haphazardly thrown together throughout Jupiter’s Moon. The central concept may be unusual, but it also could have been an ingenious way of making us look at the migrant crisis differently.

Many an arthouse film has been criticised in the past for prioritising thematic exploration over plot and general enjoyment. With Jupiter’s Moon the story is never dull, but feels unsatisfying as the creative visuals outshine everything else that is going on. Watching Aryan float into the air or soar above the city creates some amazing images, but it fails to service the story at hand.

Jupiter’s Moon may be ambitious, and may contain some brilliant camerawork, but is also crammed with far too many ideas and elements that never truly come together. Kornél Mundruczó has previously shown us that he is a talented director, but this time round he is too reliant on flashy visuals, and not interested enough in the very real experiences that migrants face.