I have no rhythm and I can’t carry a note, let alone a tune, but still, I love music. As much as I love music in and of itself, as something to listen to while I’m writing a review for instance, it’s at gigs that I find myself most transported and engaged by an artist. […] 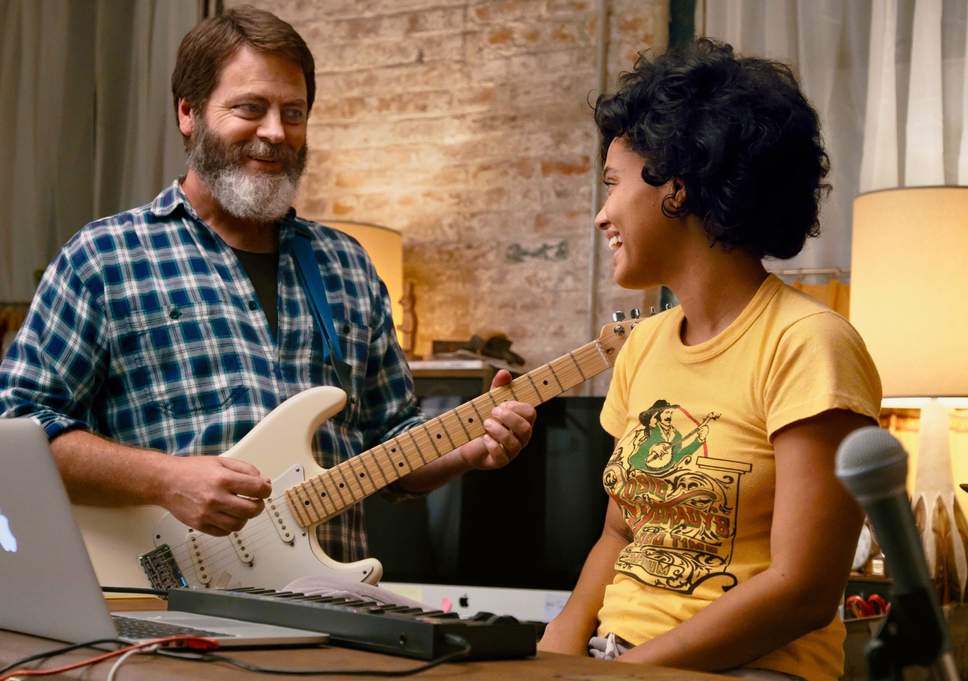 I have no rhythm and I can’t carry a note, let alone a tune, but still, I love music. As much as I love music in and of itself, as something to listen to while I’m writing a review for instance, it’s at gigs that I find myself most transported and engaged by an artist. A great gig is unifying; for the three minutes of THAT song that you and the rest of the crowd have waited for, everyone is in  the same space, sharing a moment that is emotional as well as just a chunk of time.

That’s what former musician Frank (Nick Offerman) wants to share with his daughter Sam (Kiersey Clemons) by making music together. When, just weeks before she heads off to college, they hit on a song he thinks is great, he uploads it to Spotify. Their song begins to be played and Frank, with the record shop he owns about to close down, wants Sam to stay, maybe just for a year, so that We’re Not A Band can become a real band, rather than just something they do together for fun.

Hearts Beat Loud is only partly a film about music, ultimately it is more about growing up and finding your own way in the world, for both Sam and Frank, as both their lives are about to change. Frank is clearly stuck in missing his heyday, when he played in a band with Sam’s mother (who, we soon discover, died some years ago), and as well as wanting to connect with his daughter and recapture his own past, we can see that in wanting to make music with Sam, Frank is trying at some level to recapture what he misses about his wife. Frank is comfortable in his rut, with his daughter around and the direct line to his youth that recording with her provides. On the other hand, Sam recognises all this and, while she loves her Dad, is clearly anxious to start her medical studies and her own life, moving across the country from New York to study at UCLA.Still, something of her parents’ love of and talent for music has stuck with her and, though she’s sometimes humouring him, you can see a pride in her father when they play together and her own burgeoning belief in and enjoyment of her talent.

For a film so bound up with music, it is perhaps surprising how many of Hearts Beat Loud’s strengths are in quiet moments, or even in things it doesn’t address. There has been a lot of talk in the past few years about increasing diversity in casting and representation on screen. Here we see a mixed race family and, in a PG-rated film, a lesbian relationship – played by two queer actresses – that is treated in exactly the same way it would be were the object of her Sam’s affection a guy. There is no big coming out, no hand wringing over Sam falling for a girl (Rose, played by American Honey’s Sasha Lane), instead the relationship is depicted as simple, sweet, romantic and sadly fleeting, because Sam still has to leave. This extends to subtly affecting moments like Rose offering to teach Sam to ride a bike, then understanding from her silence and her expression why she hasn’t before or Sam going from humouring her Dad to being moved when he haltingly plays her an old song from a lyrics book he’s found.

The father daughter story is the centre of the film, but around it spin some subplots that showcase a fine group of actors, with Ted Danson as Frank’s very chilled barman friend, Toni Collette as his landlady and Blythe Danner as his mother. Only Collette has more than a handful of scenes, and her Leslie’s relationship with Frank goes through several phases, all of which, including the occasional confusion between them, ring true. The film’s other evolving relationship, between Sam and Rose, has to be established quickly both because of Sam’s leaving and because of the film’s running time, but the connection between Clemons and Lane is palpable from the first time they see each other.

Clemons and Offerman are both excellent in their own right, but it’s the believable dynamic they create that powers the film. Early in the film, Frank has to coax Sam away from her books to come and jam with him. Here, and in other scenes where they argue, we can still feel the warmth between them. The sense of Sam often having to be the adult comes through strongly. When Frank buys new music equipment she’s the one who has to lecture him about money, and when he plays that song for her he’s the kid, showing the parent his art and hoping they want to put it on the fridge. The actors make all of this feel entirely natural.

Any film about musicians lives and dies by its soundtrack. Happily the songs here, by Keegan DeWitt, sung live on set by Clemons and Offerman, are excellent. The title track is a great piece of modern synthpop with a strong vocal from Clemons. This is hugely important, because if we don’t believe that it would, to some degree, find an audience when Frank uploads it to Spotify the central conceit of the film would fall apart. The way the songs come together in small pieces; little musical phrases laid down scene to scene, building into the final product, seems to ring true. Recording the vocals live is a great choice, giving a different register to each performance. This is especially true of Everything Must Go, which we is first played in rough acoustic form, then hear built throughout the film, up to the final performance that we all know, as an audience, has to arrive at some point.

Effective and affecting as a coming of age film, a story about a father and his daughter and simply as a musical, Hearts Beat Loud manages to be heartwarming without being cloying. If you have slightly older kids and are looking for something other than blockbuster fare over the summer holidays, I’d recommend this.