The opening to First Man is an intense, dizzying few minutes which you hope is a dream sequence as it cannot be real life. The sound is deafening, the rickety nature of the X15 aircraft Armstrong is flying, brought home with full force as he ascends further into the atmosphere than intended. Although we know how First Man ends this is a glimpse at how the turbulent journey started. The fervour surrounding […] 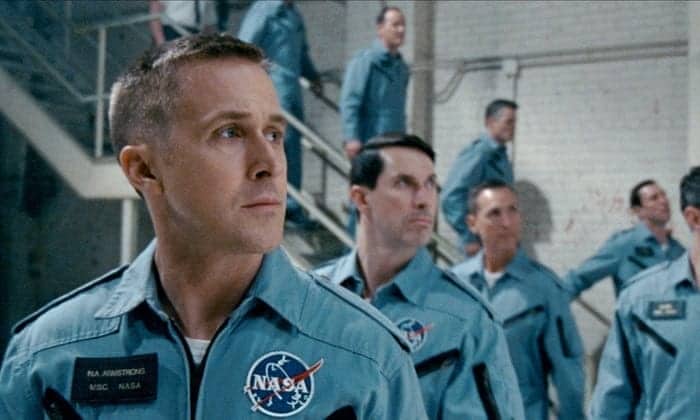 The opening to First Man is an intense, dizzying few minutes which you hope is a dream sequence as it cannot be real life. The sound is deafening, the rickety nature of the X15 aircraft Armstrong is flying, brought home with full force as he ascends further into the atmosphere than intended. Although we know how First Man ends this is a glimpse at how the turbulent journey started. The fervour surrounding space travel, the moon landings and astronauts is one of an idealistic heroism but here, Chazelle’s opening brings home the idea that the group of highly intelligent engineers who ascended into space were far more fallible than some may care to admit.

First Man is not an in-depth look at the Apollo 11 mission, we don’t get to see the math behind the spectacle, but it is an interesting dive into the life of the man most closely associated with the mission. Armstrong is regard as an egg-head by those around him, he is a quiet, contemplative individual that doesn’t necessarily lend himself to be the centre of attention. He commands respect however and when he speaks the group he is a part of listen. Chazelle’s skill here is inensuring that Armstrong, although aloof, serious and sometimes disregardful of his own family, is completely human.

Kudos goes to Ryan Gosling’s performance who once again succeeds in saying very little. His performance could easily have been wooden and ruined this film when in reality it does nothing but add to it. For all of the quiet charisma that Gosling brings it is his ability to portray grief that propels the film’s narrative – Armstrong’s daughter dies in the film’s opening minutes. Typical of 1960’s male protagonists Armstrong’s coping mechanism is to bury his emotions after a brief, lonely tear and let them manifest as they see fit, often to the detriment of those around him. However, I would not say with certainty that a modern portrayal of male grief would look much different.

Claire Foy as Armstrong’s wife, Janet, bears the emotions that Armstrong has buried and although theevents relegate her to a secondary character, her performance pushes her front and centre alongside Gosling and Josh Singer’s script does good job at highlighting the sacrifices Janet made for her husband’s decisions. Their once convivial home life has become tense, heated and deeply mournful, both for the idea of a ‘normal’ life but also for the missing piece to their family unit. Janet is fully aware of the dangers her husband is under and has been to enough funerals to not want to become another single mother and social outcast. In an excellent sequence, one confrontation with NASA officials leaves them in no doubt of her opinion of them and their space program, “You’re a bunch of boys making models out of balsa wood! You don’t have anything under control!” it is deeply cutting, all the more so for being to a large extent, true.

The Cold War looms in the background as Armstrong rises through the ranks of NASA, going to places no human has been before but for each triumph, the comrades suffer another potentially debilitating loss. Chazelle’s first film Whiplash was about perseverance in the face of seemingly insurmountable odds, La La Landalso had characters determined to reach goals that seemed unobtainable and so with First Man’s depictions of dogged determination he is on solid ground. Here however he turns the dial up ever so slightly, the decision to flit between first- and third-personperspectives keeps you rooted in the characters’ livesand the close ups inside the nauseatingly confinedcockpits bring home just how much of the progress is reinforced with nothing but bolts, steel and wiring.Cockpit sequences are bolstered by, Justin Hurwitz’s sound design which manages to capture the ungodly rumble and clatter that does little to calm the nerves.

The film is being released in the lead up to the 50th anniversary of Armstrong’s moonwalk and Chazelle has crafted a film that strips away the event’s mystery to find the obsession and humanity in what to many is now just old newsreel footage. Gosling encapsulates Armstrong,the famed astronaut and Foy has created a hero out of Janet. The backdrop to the known narrative is not celebratory, this is a couple attempting to hold not only themselves together but their whole family. Films are often cheapened when attempting to deal with catharsis, but here it is thoroughly deserved.