Faces Places has a brilliantly simple premise. The film follows photographer JR and legendary film director Agnès Varda as they travel to small French towns and photograph the people they find there. The photos they take are in turn used to create large murals which are plastered onto nearby buildings. Through doing this JR and Varda speak to members of the local communities […] 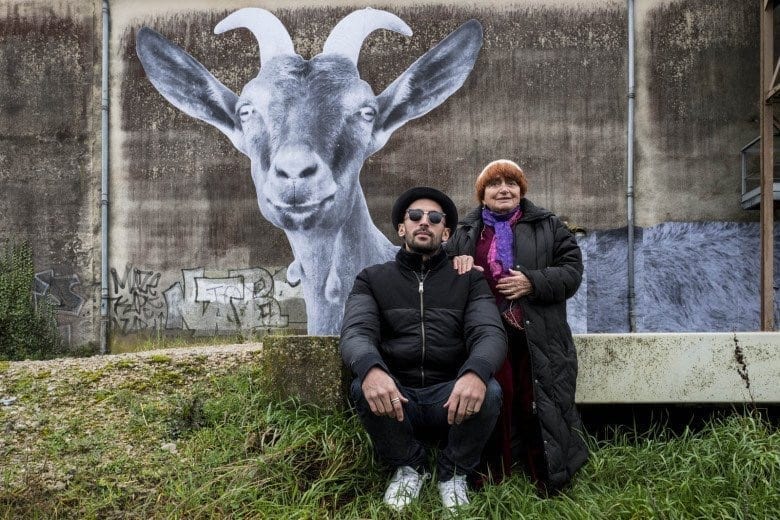 Faces Places has a brilliantly simple premise. The film follows photographer JR and legendary film director Agnès Varda as they travel to small French towns and photograph the people they find there. The photos they take are in turn used to create large murals which are plastered onto nearby buildings. Through doing this JR and Varda speak to members of the local communities and learn about their lives and what makes these places tick. They are able to seek out fellow eccentrics and their conversations can be both bizarre and insightful.

Agnès Varda is one of the most beloved and recognisable members of the French New Wave, an artistic movement thatrevolutionised cinema in the 1960s. Her first feature La Pointe Courte came out in 1955 and Varda has had a longevity unmatched by nearly all her contemporaries. Varda was 88 while filming Faces Places and is still full of life and ideas.

In recent years much of her work has been revisited and Varda has come to be seen as one of the great feminist filmmakers. Films like Cléo from 5 to 7 and Vagabond display Varda’s interest in female characters and storylines. This tendency reappears in Faces Places and can be seen when Varda visits a dockyard and produces a mural of the dock workers’ wives rather than the dock workers themselves. It is a touching gesture that reminds us that even within tightknit communities some people’s stories are overlooked in favour of others.

JR will be less recognisable to most viewers but he is an accomplished photographer and artist who has built a large reputation through his street murals. He specialises in ephemeral images that are lost over time. At one point he plasters a giant photo of someone Varda knew when she was younger onto a Second World War bunker that had fallen from a cliff onto the beach. It is a beautiful tribute to Varda’s friend but it is swept into the sea less than a day after it is erected. Varda likes the temporary nature of JR’s work, as it emphasises the transient and temporary nature of life.

JR and Varda make a great duo and their exchanges are both humorous and thoughtful. They clearly look at the world in a similar way and the warmth between them is clear to see – at one point JR even takes Varda to see his grandmother. They also have a shared sense of fun, best illustrated when JR puts a photo of Varda’s toes on the side of a train.

Much like her previous documentaries The Gleaners & I and The Beaches of Agnès, Faces Places has a personal and warm feel that maps Varda’s mood and thinking. She has an easy going manner that can give the film a deceptively casual feelbut she and JR are committed to their investigation of the importance of art within a community. One of the places they visit is a half built town that was abandoned before it was finished. Almost as a way of showing what could have been, they invite round members of the nearby villages and put their faces on the walls of the derelict buildings.

Faces Places has a sense of discovery that is infectious. It is a beautiful collage that takes memories and anecdotes and turns them into art. After watching the film you will certainly agree with Varda’s assertion that ‘each face tells a story.’