In real life Columbus, Indiana is a rather unassuming small city located in the American heart land. With a population of around 50,000 people it would be easy to overlook Columbus in favour of the larger and more recognisable cities that can be found not too far away. Academic turned filmmaker Kogonada’s debut film can at first seem a […] 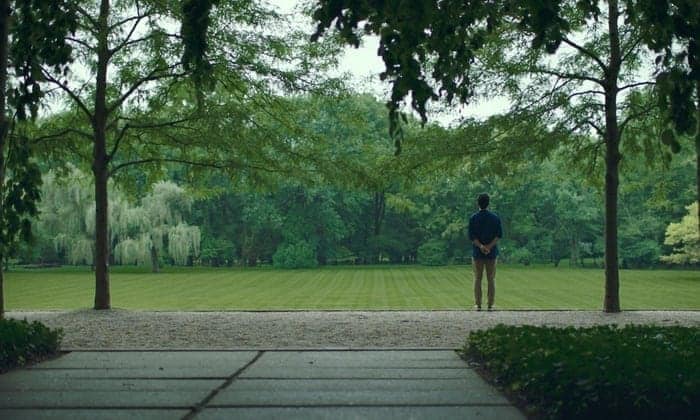 In real life Columbus, Indiana is a rather unassuming small city located in the American heart land. With a population of around 50,000 people it would be easy to overlook Columbus in favour of the larger and more recognisable cities that can be found not too far away. Academic turned filmmaker Kogonada’s debut film can at first seem a little modest but it doesn’t take long to appreciate the depth and wisdom that Columbus contains.

The film centres on a friendship between Jin (John Cho), an American living in Korea as a translator who returns to the USA to see his dying father, and Casey (Haley Lu Richardson), a young woman working in a library and as a tour guide. They both have troubled relationships with their parents – it has been over a year since Jin has spoken to his father and Casey constantly needs to keep an eye on her recovering drug addict mother – and they quickly strike up a friendship. There is an openness to their conversations which often focus on the many unique buildings and spaces found within the city. Casey dreams of being an architect, even if she struggles to admit it, and her friendship with Jin helps her decide on the direction she would like to take her life.

Director Kogonada has taken an interesting route into filmmaking. Beginning as a film academic and video essayist, his debut feature Columbus is as intelligent and thoughtful as it is meticulously crafted. Every shot, scene, and conversation seems to have been perfectly pieced together to create a film that is artfully constructed.

A huge emphasis is given to architecture within the film, both visually and in the conversations between Casey and Jin. The camera work makes you aware of the spaces scenes take place in and the way in which frames are placed inside shots appears to be a nod to the work and precise style of Yasujirō Ozu. Often important details are only seen in mirrors or through doorways.

In one of the film’s best scenes, Casey talks about how the town’s modernist bank moves her. Columbus in many ways is about how certain spaces can give us specific feelings. In the town there is a building that encourages mindfulness and can ease anxiety and depression. Good design can clear the mind and can make certain experiences easier.

Kogonada often uses a wide frame and allows his characters to move within them and interact within the space they find themselves in. Columbus, Indiana is full of beautiful buildings and spaces but it is the conversations and activities that take place within them that really bring them to life. Despite all the theorising about architecture, it is the friendship between Casey and Jin that lies at the heart of the film. A more conventional story would have created a forced and contrived romance between them but Kogonada understands the importance of friendship and the impact it can have.

The brilliance of Columbus is that it makes you aware of things you would usually ignore, whether it is a well-designed space or meaningful conversation. Too often we overlook what is around us and are left chasing the unobtainable. Jin acknowledges this in his considered manner and says ‘You grow up around something and it feels like nothing.’ A lot is said about how busy our lives are and there is something refreshing about the contemplative and reflexive approach that Kogonada takes.

Ultimately, Columbus is a subtle and meditative look at the order of architecture and the disorder of life. Somewhere in between Kogonada strikes the perfect balance of ideas and emotion.