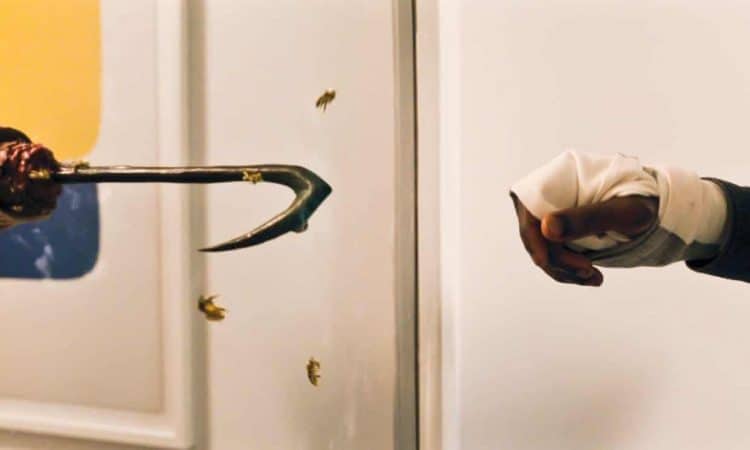 An ephemeral figure haunts the African American populated projects of Cabrini Green in Chicago; a wronged man known for handing candy to children and lynched by cops after being falsely accused of handing tainted sweets to a white girl.

Decades later, black Chicago artist Anthony McCoy (Yahya Abdul-Mateen II) moves into the gentrified neighbourhood on the old site, and becomes drawn to the legend of Candyman (portrayed once more by Tony Todd).

The core of the Candyman legend emanating from the 1992 original arguably has more of a cultural legacy than the film itself. Say his name five times into a mirror and he will appear is now an urban legend familiar to most anybody. This idea is expanded upon in the 2021 version, though often at times it feels as if it the storyline has bitten off more than it can chew.

The legend was clearly linked to ideas of gentrification and historic racism in the original, and these are expanded on here as the figure of lore is portrayed as one seeking vengeance on behalf of all black men and women mistreated throughout American history. This seems fertile ground for Jordan Peele, director of Get Out who co-wrote the screenplay for Candyman, yet there are so many competing ideas in this film it never satisfyingly comes together.

The Candyman is very literally an avenger, and seems to be as strong as ever in spite of the loss of his community. The events of the original Candyman film, a white folklorist who died pursuing the legend, are directly built upon here so as to define this as a sequel, yet are in many ways confusingly shoehorned in.

Much of this must be put down to Nia DaCosta’s direction, both adept at flashy scenes of slasher horror, yet unable to fully capture the social comment. Pretentiousness, racism and classism are hardly new accusations against the modern art world for instance, and the white figures present here exist as broad stereotypes instead of as the more complex and insidious niceties of the white figures in Get Out. This is also a film that makes great use of excellent visual effects, and Anthony’s skin can be a hideous sight to behold.

It’s a joy to see black led horror continue its wave, and the furious anger driving Candyman can be captivating. Ultimately however, this is a film that is too much looking in on itself, and not always as able to convey its sickly horror as it might seem.