The idea of Ben Stiller playing a self-pitying white dude is not a particularly original one, yet here he finds himself once again in this new film by School of Rock writer, Mike White. Essentially a comedy drama, Brad’s Status is a film that yearns to be thought-provoking and rewarding, but how much you buy […] 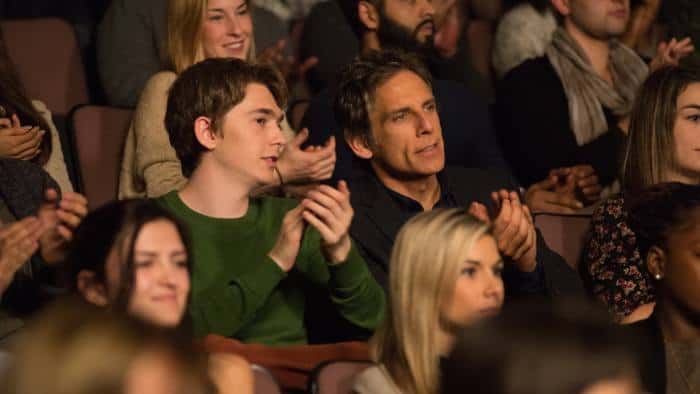 The idea of Ben Stiller playing a self-pitying white dude is not a particularly original one, yet here he finds himself once again in this new film by School of Rock writer, Mike White. Essentially a comedy drama, Brad’s Status is a film that yearns to be thought-provoking and rewarding, but how much you buy into this is dependent on how much you care about Ben Stiller’s titular character.

Stiller plays Brad Sloan, a 47 year old in the grips of status anxiety. He runs a successful Non-Profit organisation, has an ever accommodating wife, Michelle, played by Jenna Fischer (underwritten and not seen enough), and a talented musician for a son, named Troy – who has his heart set on going to an Ivy League college.

Deep down, Brad Sloan should be happy. He has everything: the house, the loving wife, the son on the cusp of being accepted into a great school. But no, Brad lies awake at night being pummeled by the feeling that his life has lost its way, consumed by the idea that he took a wrong turn somewhere down the road. This feeling is exacerbated by the fact that Brad’s closest friends from college are all mega-successful, and have gone on to achieve an obscene amount of fame and wealth.

The questions at the heart of Brad’s Status are: How much have I achieved? Did I make the right life choices? Should I have sold out and taken the money? Questions that may be universal, but are not questions we can often ask or share in public; they are private and occasionally debilitating. Centering a film’s narrative on them ends up being nearly as exhausting as living them. When watching Brad’s Status, we are sharing our time with a successful and slightly narcissistic middle-aged white man, and it feels a little bit like being stuck with the shitty thought you have when a co-worker tells you over lunch that they got the promotion you had both gone for; you’re pleased for them, but you also want to jab a fork in their eye.

Brad and Troy take a trip to visit Harvard and Tufts, the colleges Troy is applying to, and it is during this trip where the alternative perspectives of Brad’s situation are laid bare. Due to his dad’s scattiness and seemingly out-of-character behaviour, Troy believes his Dad to be on the brink of a nervous breakdown. Troy is played by Austin Abrams, who is excellent in the role of the straight man, and some of the scenes of genuine father/son bonding are the film’s best.

Brad’s situation is succinctly put into perspective by Troy’s friend Ananya (played wonderfully by Shazi Raja, who delivers a brilliant look of bored disinterest), who upon hearing Brad’s self-pitying diatribe responds with, “You’re 50 years old and you still think the world was made for you”. This perfect puncturing of Brad’s entitlement would have made for a wonderful ending; just stop the film there, alas it doesn’t end there and the film meanders on to its conclusion.

Brad isn’t an easy guy to spend time with, but neither are the thoughts Brad’s expressing: White pitches the social embarrassment well, and the film is agonising in the right places. However, when the credit’s rolled all I wanted to know was: Did Troy get into Harvard or Tufts? What’s Anaya doing now? How are they both living their dreams? I didn’t care at all for Brad and his journey, because deep down you know he will be fine… as after all, the world was made for him.