By Michael McNulty Marianna Palka’s fourth feature, Bitch, is a flawed, but strangely captivating film.  A fantastical tale of a woman living on the brink of breakdown who is one day pushed over into a full scale meltdown of canine proportions. Jill (Marianna Palka), mother of four and wife of philandering, never present father, Bill […] 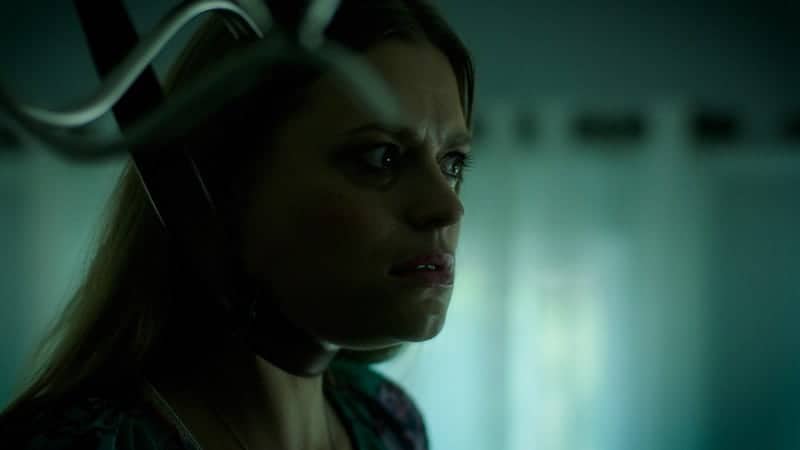 Marianna Palka’s fourth feature, Bitch, is a flawed, but strangely captivating film.  A fantastical tale of a woman living on the brink of breakdown who is one day pushed over into a full scale meltdown of canine proportions.

Jill (Marianna Palka), mother of four and wife of philandering, never present father, Bill (Jason Ritter), exists in a state of high anxiety, her mind scratching at the doggy door of collapse.  Their kids are an obnoxious bunch blind to her fragility (save perhaps the eldest daughter).  The fact that no one has noticed the collapsed light fixture pulled from the ceiling in Jill’s botched suicide attempt speaks volumes for how tuned in the family is.

Very much on her own, Jill is locked in a suburban prison.  Her only company comes in the form of an unwelcome Alsatian who sits in the home’s front garden, panting heavily and barking at her or perhaps for her.

One morning the household awakens to a motherless home.   Jill has vanished overnight thrusting domestic responsibility into the hands of Bill, a responsibility he is grossly unprepared for as he struggles, in a hilarious sequence, to get through the morning school run, falling over himself and forgetting his children.

Only when the children return from school do they discover their Mother hiding away in the basement, naked and covered in her own excrement, having regressed into a doglike state.  Bill, alone and unable to cope is forced to call in the assistance of Beth (Jamie King), Jill’s sister, to help manage the household.

The metaphor of Bitch is about a subtle as a knife in the back.  It is a feminist film, an out and out criticism of traditional family constructs reminiscent of the 1950s.  But, it’s also about the coming together of a fragmented family, the importance of unity and togetherness and although the handholding, ice cream moments, as Bill slowly reconnects with his family, feel a little contrived and saccharine, the message is clear.

Palka does a fantastic job of creating the chaos of Jill’s seemingly quiet life through the use of Morgan Whirledge’s busy score and this is where Bitch really soars.  Frantic jazz drumming is interwoven with a queasy suburban sound that feels ripped straight from an episode of Desperate Housewives and all of it is layered overtop a ceaseless barking track.  It’s unending and adds an edge that creates an exhausting tension that’s maddening.

The film is not without its flaws, not least the mediocre performances put in by both Ritter and King.  But, it’s a happy sacrifice when it’s clear that Palka has directed her attention towards creating a mood and atmosphere that both lingers and provokes.