Beautiful Boy is an affecting drama about a father coping with his son’s drug addiction that is equally intriguing as it is frustrating. It stars Steve Carrell as David Sheff, a successful journalist living in rural California. His son Nic (Timothée Chalamet) is a seemingly normal teenager who is getting ready to go to university but it becomes apparent that he […] 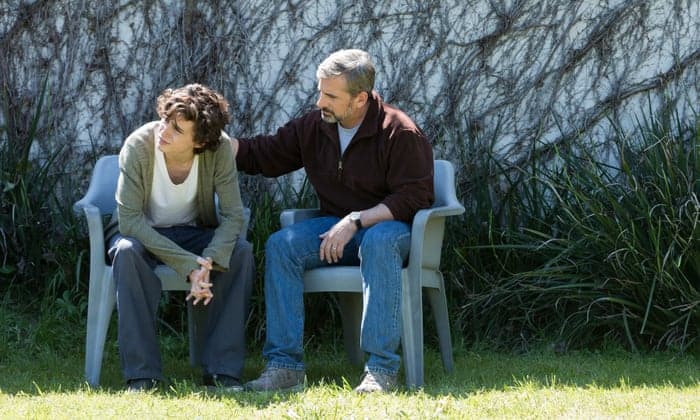 Beautiful Boy is an affecting drama about a father coping with his son’s drug addiction that is equally intriguing as it is frustrating. It stars Steve Carrell as David Sheff, a successful journalist living in rural California. His son Nic (Timothée Chalamet) is a seemingly normal teenager who is getting ready to go to university but it becomes apparent that he is not just consuming alcohol and cannabisbut also cocaine, ecstasy, and crystal meth. A short stink in rehab appears to have positive results but, in a pattern that defines the film, initial encouragement is followed by relapse. Despite David’s best efforts it looks like an increasingly impossible cycle to break.

Based on a true story, and the memoirs of both David and Nic, Beautiful Boy is full of real life details that help us connect and empathise with both those living with and alongside addiction. There is a tangible sense of the emotional toll these experiences had on those involved and how it changed their lives and family dynamic. Director Felix van Groeningen, who previously directed The Broken Circle Breakdown and Belgica, is able to bring a visual sheen to the film and gives the actors enough space to delve into their characters.

Rarely has a young actor received as much attention and critical praise as Chalamet. Following the release of Call Me By Your Name last year, audiences have been highly anticipating where his career will go next. Beautiful Boy will undoubtedly fuel the hype even further. His performance is brimming with both vulnerability and aggression – crystal meth can have the effect of making users volatile and shift between personality traits – and is very much at the dramatic heart of the film.

Despite a good performance from Chalamet, Nic remains an enigmatic figure who is difficult to pin down or truly understand. The reasons behind his addiction are never really explored, aside from vague illusions to unfulfillment, a judgemental upbringing, and his parents’ divorce. It often feels like he merely stumbled into addiction.

The film constantly asks the question: how could this happen? How could someone from a good background and a supportive family become addicted to crystal meth? Rates of drug addiction are consistent throughout society and in most cases social demographics have little influence on who is vulnerable to these kinds of substances. As the script is in part based on Nic’s autobiography you would have thought there would have been more of an attempt to get inside his mind and look at the causes of his addiction and answer some of the questions the film raises.

Beautiful Boys’s lack of answers is not just frustrating but shows a lack of enquiry and curiosity. As a result, the film feels reactive as it follows Nic sinking deeper into addiction without a response to why it happened or how to stop it. With the power of hindsight, as well as two memoirs, Nic and David must have come to some conclusions on the experience they both endured. Films like Requiem for a Dream, Trainspotting, Sid and Nancy, Heaven Knows What, and even A Star is Born have demonstrated that is it possible to examine what influences addiction and the emotions that accompany it.

Instead far too much time is spent following David, who is determined to find out everything he can about crystal meth and its effects on its users – at one stage he even takes the drug himself in a misguided attempt to understand the nature of the substance. His enquiry is misplaced but does eventually lead him to the conclusion that only Nic can save himself.

Rather than going inside the mind of an addict, Beautiful Boy is oddly more interested in the middle class setting that surrounds it. When First Man was released last year many observed that it was a film about landing on the moon which was more concerned with ideas of loneliness and isolation. In much the same way, Beautiful Boy is a film about addiction that is more interested in family, obsession, and personal resilience.