Taking seven days to shoot and incorporating 78 camera setups and 52 cuts, the shower scene from Alfred Hitchcock’s Psycho is one of the most memorable and iconic sequences in cinematic history. In 78/52 director Alexandre O. Philippe looks behind the curtain of Hitchcock’s most famous murder. Joining him is an impressive ensemble of directors, editors, actors, and film […] 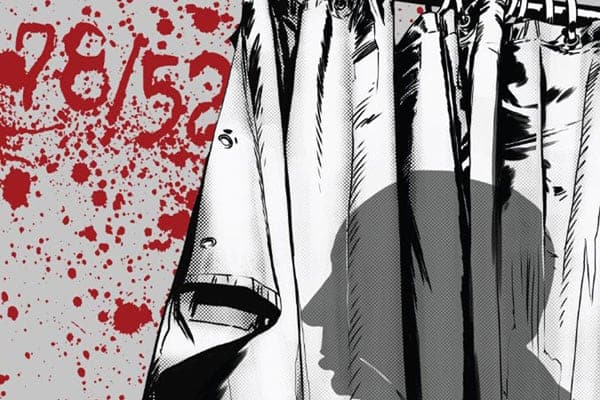 Taking seven days to shoot and incorporating 78 camera setups and 52 cuts, the shower scene from Alfred Hitchcock’s Psycho is one of the most memorable and iconic sequences in cinematic history. In 78/52 director Alexandre O. Philippe looks behind the curtain of Hitchcock’s most famous murder.

Joining him is an impressive ensemble of directors, editors, actors, and film historians that includes Bret Easton Ellis, Peter Bogdanovich, Jamie Lee Curtis, Elijah Wood, and Guillermo de Toro. Each has their own different experience encountering Psycho and each has their own insight on the film, its context, and the killing at its centre. Considering that the documentary is essentially a group of people discussing 45 seconds worth of footage, 78/52 does manage to be surprisingly entertaining. It is well structured and it never lingers on any one point too long.

Bearing in mind the interviewees at its disposable it should not be a surprise that the film is effectively able to deconstruct and analyse each shot and frame. Peter Bogdanovich, who recounts his experience seeing the film while he was still a critic, is especially thoughtful and along with the other participants is able to show the craft and skill that Hitchcock displayed within the scene.

In many ways, thought, 78/52 is at its best when it places Psycho within its wider social and cultural history. At the same time as its release the role of the mother was being questioned within American society, as overprotective parents were blamed for a spoilt generation. There are many examples of Hitchcock’s complicated relationship with mothers within his filmography but it is never better illustrated than in Psycho. It is admirable how the documentary is steadfast in its belief that the shower scene changed the history of not just cinema but modern culture and it can often be hard to argue.

The only real issue with 78/52 is its reluctance to discuss Hitchcock’s treatment and depiction of women. One interviewee may mention how the film has inspired many scenes where scantily dressed women are killed but beyond this the topic is never covered. While Hitchcock may have inadvertently invented the slasher genre, the silence surrounding this subject seems to undermine the film’s attempt to depict Psycho as a progressive work. Hitchcock’s treatment and portrayal of women has been well documented and it is difficult to see him as forward thinking in this department. Now I am not saying that Hitchcock was necessarily a misogynist but given the number of articles that have addressed the issue it is strange that no retort is given. The silence on this matter in many ways only seems to reinforce this idea.

78/52 is a surprisingly entertaining look at one of film’s most iconic scenes. Some more complicated issues may be overlooked but the documentary still manages to show why Hitchcock is seen as one of cinema’s true masters.

Available on DVD from December 11th