By Anna Power Based on the graphic novel by Raymond Briggs, Ethel and Ernest is a love song to his parents, to working class values and to a uniquely English way of life that belonged to a time now gone forever. Touching and deeply personal, the film follows the couple through their courtship in the […] 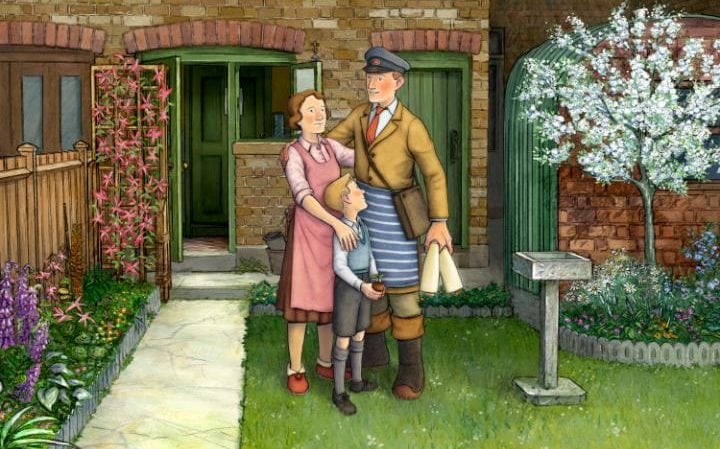 Based on the graphic novel by Raymond Briggs, Ethel and Ernest is a love song to his parents, to working class values and to a uniquely English way of life that belonged to a time now gone forever. Touching and deeply personal, the film follows the couple through their courtship in the 1920’s to their deaths in the 1970’s, with a backdrop of the tumultuous and rapidly transmogrifying twentieth century piercing through their suburban ebb and flow from the Great Depression and Second World War to technological inventions such as the car and television.

The film opens with Briggs looking out over his desk onto the Sussex Downs pondering what his parents would have made of their lives being documented in this way and he charmingly imagines them saying ‘ what d’you want to go and tell them that for’. As we embark on the journey of their lives, the simplicity of Briggs’ drawings reveal an uncluttered, heartfelt and honest portrayal, far more vivid and affecting than anticipated.

Ethel is in service as a maid in a big house in London and is spotted by Ernest whilst on his milk round. They then sweetly look out for each other daily until Ernest finally plucks up the courage to ask her out on a date. Ethel is shy but is delighted and the two go out to the pictures. Whilst passing a nightclub blaring Jazz and buzzing with well-heeled flappers and toffs, they pause as Ernest carried-away says he’d like to take Ethel dancing, only quickly to realise the impossibility of such a suggestion, both financially and socially, which Ethel in her hesitancy had already twigged.

They get married and Ethel leaves her job to become a housewife and they buy a house in Wimbledon Park, filling it gradually with second hand furniture, with a make-do attitude. Ethel is in her late 30’s and is keen to have a baby and eventually Raymond is born. Raymond passes his eleven plus to go to grammar school, which much to Ethel’s delight, none of the neighbours’ kids had done. They have high hopes for Raymond getting a job in an office or being a manager – the outer limits of their concept of success, until Raymond announces that he wants to go to art school and starts coming home with beatnik clothes and long hair. They worry about him and his future with an art degree, believing ‘there’s no money in it’. When Raymond starts teaching art part-time Ernest can’t believe that he earns more money for one days work than he earns for an entire week as a milkman. They watch as Raymond settles down and buys a cottage in Sussex, another dream of theirs that was beyond their financial grasp, as their son moves up socially and economically in class.

Through the course of their married life, there are the usual irritations and grumbles and it is clear that Ethel’s social aspirations do not chime with Ernest’s love of socialism and passion for Clement Attlee’s creation of the welfare state. This depiction of honest, working class family life reflects David Lean’s This Happy Breed looking at life in London between the wars.

As the embers of their simple well-lived lives expire, the trauma of their deaths packs an emotional punch, worsened by the visceral detailed drawing of their dying facial expressions.

Ethel and Ernest is a beautiful film and whilst simplistic in delivery, is conversely complex and layered, humorous and romantic, deserving to be seen and savoured.

Ethel and Ernest premiered at the London Film Festival and is on general release from Friday October 28th.