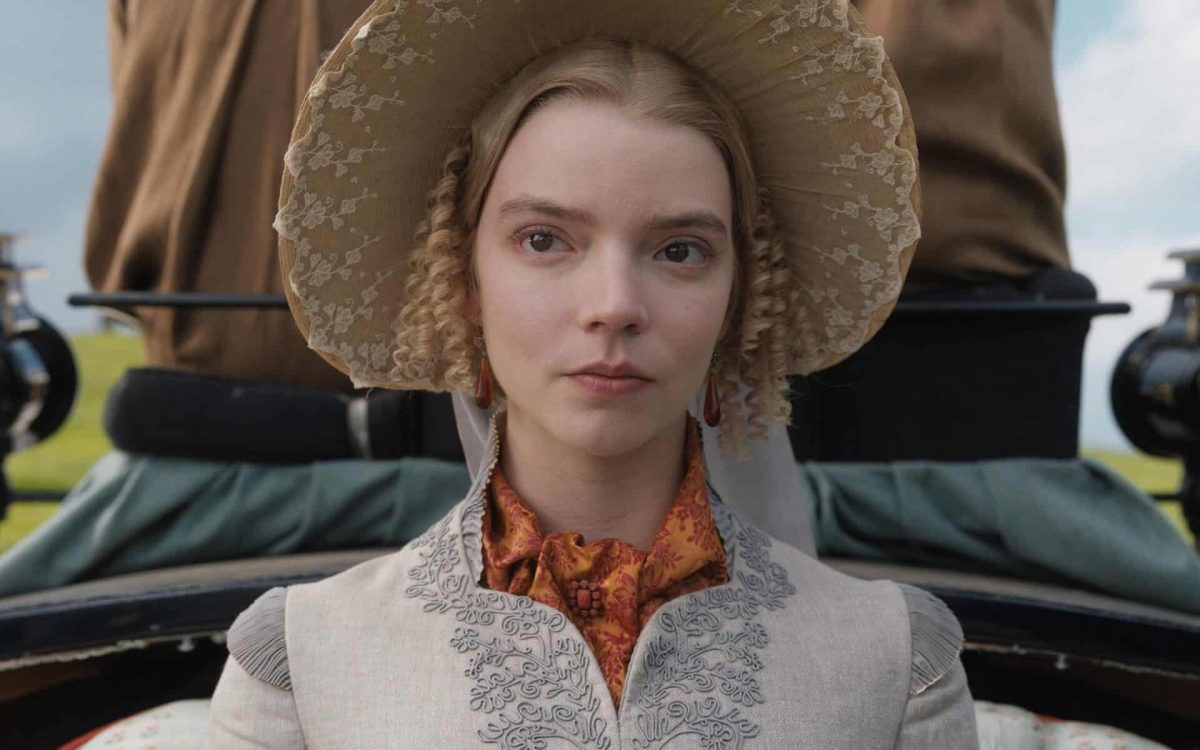 As Jane Austin’s classic novel about youthful hubris and the perils of idealised romance gets another reboot, we cast our minds to its predecessor, the 90s Gwyneth Paltrow starring vehicle. A fresh-faced Paltrow sporting a first-rate English accent playing a meddling matchmaker. Despite its period-ness, the reboot is loaded with 90s retro coolness influencing the arts and fashion of the last decade. Hence a remake was only inevitable, if almost a tad bit late.

Anya Taylor-Joy takes the helms as the well-to-do noble young woman with a saviour complex. I’ve been a fan of Taylor-Joy since her exceptional turn as a possessed daughter in Richard Egger’s New England set The Witch; morphing into a dry upper-class high schooler in the underrated macabre Thoroughbreds. Earning further brownie points as the voice of Brea, in Netflix’s The Dark Crystal. And here Taylor-Joy’s unusual elfin prettiness adds an edge to Paltrow’s conventional beauty. Her Emma is more of a mixed bag. Seemingly confident, knowing of her privilege yet in reality is more like a headless chicken. Cumbersome efforts to manoeuvre situations and people into coupling with little to no success; complicating their lives further in the process.

Taylor-Joy is equally rivalled and often surpassed by Mia Goth’s Harriet Smith; her goofy, frumpy sidekick. Harriet becomes the sole focus of Emma’s attention. Come rain or shine, she is determined to find her a worthy suitor . Blindly patronising, believing she is salvaging Harriet from what she deems as ordinariness; instead keeps setting her up for failure, making her the laughingstock of the local high-society.

A slick and supremely frilly interpretation by director Autumn De Wilde. Drawing rooms painted in thick lavender purple and ornamented to the nth degree in rococo style; resembling an assortment of Mrs Kipling’s fondant fancies. A background in music videos could have pleasantly led De Wilde down a more alternative Baz Lauhrmann/ Jonas Akerlund route, but instead she sticks to familiar territory of detailed period representation. And like its precursors, owed to Austin’s writing, there is the pervasive feminist streak seen through Emma’s small acts of non-conformity.

Its in the early scenes where its most problematic with all their hackneyed comedic silliness. A trope used to introduce each character. Predictable wink wink jokes and overbearingly cutesy quintessential prim and proper mannerism, conducive to an annoying laughter of the audience around me. For me, the jokes fell flat. Unbearbly contrived and condescending. It’s not until these introductions are done away with, actors settle into their roles and Emma starts to muddle-up things up, that the plot gains traction. The revelation that her match-making skills are not up to scratch and her inability to fathom her own feelings for Mr Knightley (a notable Johnny Flynn whose transition from singer-songwriter to actor is on an uphill trajectory), signal to deep-seated issues of losing her mother early in life and a submissive father (Bill Nighy) with very little input.

Visually is where the film’s strengths lie. The richness and detail of sets and costumes; the exceptional crisp cinematography further enhanced by a handful of impressive performances. However Its in its efforts for broad appeal by restricting itself to a faithful adaptation, leads to a style over substance sensation. Then again, what was I expecting? Yes, it maybe twee, Working-Title-esque, at points pedestrian but admittedly it’s eye-wateringly pretty and very entertaining. So on those grounds the film is a success.