By Michael McNulty Andrew Kötting’s Edith Walks is an absurdist, quasi-journey, experimental documentary that follows Kötting and a merry band of travellers (the role of Edith played by singer Claudia Barton, complete with irritating pixie girl voice and flowing medieval gown) as they walk from Waltham Abbey via Battle Abbey to St. Leonards-on-Sea, where there […] 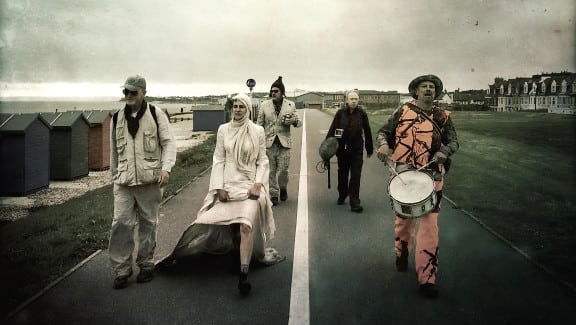 Andrew Kötting’s Edith Walks is an absurdist, quasi-journey, experimental documentary that follows Kötting and a merry band of travellers (the role of Edith played by singer Claudia Barton, complete with irritating pixie girl voice and flowing medieval gown) as they walk from Waltham Abbey via Battle Abbey to St. Leonards-on-Sea, where there exists a large statue of King Harold. For those unfamiliar, the Edith of the title refers to Edith Swan Neck, who was the fast hand wife of King Harold and is alleged to have been the only person able to identify his mutilated body after the Battle of Hastings. The walk is to be regarded as a pilgrimage in Edith’s memory that sees her reunited with her husband 950 years later.

Whilst Edith Walks brings to light a part of British history and folklore that many will be unfamiliar with, the film itself feels like the bourgeois musings of a middle aged pseudo-intellectual who’s palling around with a group of pre-hipster era hipsters. It’s whimsical, “we’re not taking ourselves too seriously” tone feels patronising, like they’re all in on a clever joke and if you’re not laughing then, “you just don’t get it man.”

Framed as an absurdist adventure that’s meant to be an exploration of Britishness and psychogeography, Edith Walks isolates itself and feels completely inaccessible. It’s the kind of film you imagine a British cultural institute taking great pride in screening, only for the programmers to gather in the dark of the projection room to celebrate their intellect in a sweaty, circle jerk broken up only by whimpering orgasms, self-indulgent tittering and to refill long stem wine glasses with this week’s pick of the best Sauvignon Blanc.

The footage, part of which was captured through a super 8 iPhone app (how digitally retro), is cut with interviews and archival footage of a school children’s re-enactment of the Battle of Hastings, that blur the lines between reality and staged absurdist humour.

Beware: The art kids have banded together, blagged themselves a budget and some equipment and run riot. Do yourself a favour and instead of seeing this film, go for a walk yourself. Preferably one that lasts the length of time Edith Walks is being screened in cinemas near you.