By Anna Power Pride is a funny, heartwarming, celebratory film about the real-life union between gay rights campaigners in London and striking Welsh miners. Set in the 80’s, depicting a time when the harsh policies of Margaret Thatcher’s government made insurgents out of the least likely, crossing societal divisions of class, race, gender and sexual […] 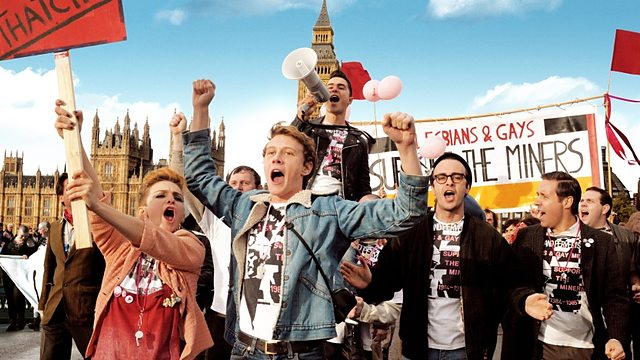 Pride is a funny, heartwarming, celebratory film about the real-life union between gay rights campaigners in London and striking Welsh miners. Set in the 80’s, depicting a time when the harsh policies of Margaret Thatcher’s government made insurgents out of the least likely, crossing societal divisions of class, race, gender and sexual identity, when politically the only side to be on was – any side but Thatcher’s side. Throw into the mix a stonking 80’s soundtrack (The Smiths, Billy Bragg), wall-to-wall quiffs, Levis and Doc Martin Boots and let the fun begin.

The film skillfully depicts (using fact mixed with artistic license) the almost unbelievable coming together of two marginalized communities in solidarity against the government. This unlikely union begins with passionate, politically aware Mark (Ben Schnetzer) watching a news report on the miners’ strike; finding common ground between the miners’ plight and that of the persecuted gay community. He energetically sets out to rally his friends into action, (Dominic West as flamboyant ex-theatrical actor Jonathan and sensitive still-in-the-closet ‘Bromley’, George MacKay) and together they begin to raise money, forming the imaginatively named, LGSM (Lesbians and Gays Support the Miners), hitting the streets of London, armed only with collection buckets and tremendous verve.

As the activists descend on the tiny Welsh mining village of Onyllwyn, there is the expected culture clash between stalwart Welsh macho miners and their colourful visitors, although the film never slips into cliché territory. We are instead taken on a hilarious cultural exchange of sorts, involving some Swayze-style dance moves from Jonathan (West) at the local working men’s club and a tour of London’s gay bars, bringing a whole new meaning to the term ‘village people’. Imelda Staunton is hilarious as Hefina whose blush-worthy banter is some of the best in the film. It’s a faultless stellar British cast too, with Bill Nighy as the shy, local playwright Cliff and Paddy Considine’s humble, steadfast, miner Dai.

LGSM succeeds in bringing more than money to the miners and their families, they bring hope and resilience to this forgotten corner of Britain at a time of great suffering; the two communities profoundly touching each other’s lives, strengthened by the obstacles they have to face, both personal and political, providing us with cinematic moments that are both intensely moving and tender.

There is something uniquely British in its feisty humour and as such, Pride deserves a place as an instant British classic with a firmly entrenched lineage from Ealing comedies to modern favourites like Billy Elliot and The Full Monty.

Pride is a lovable slice of modern British cinema, which succeeds in being uplifting and heartbreaking at the same time. Unmissable.

Pride is out on DVD from Monday 2nd March.