Review by Leslie Byron Pitt/@Afrofilmviewer Son of Saul is the type of movie that has to be seen when the viewer in the right state of mind. Least they find themselves equally as trapped within the films tight compositions, as the titular Saul. A Jewish–Hungarian prisoner held within the confines of Nazi extermination camp Auschwitz, […] 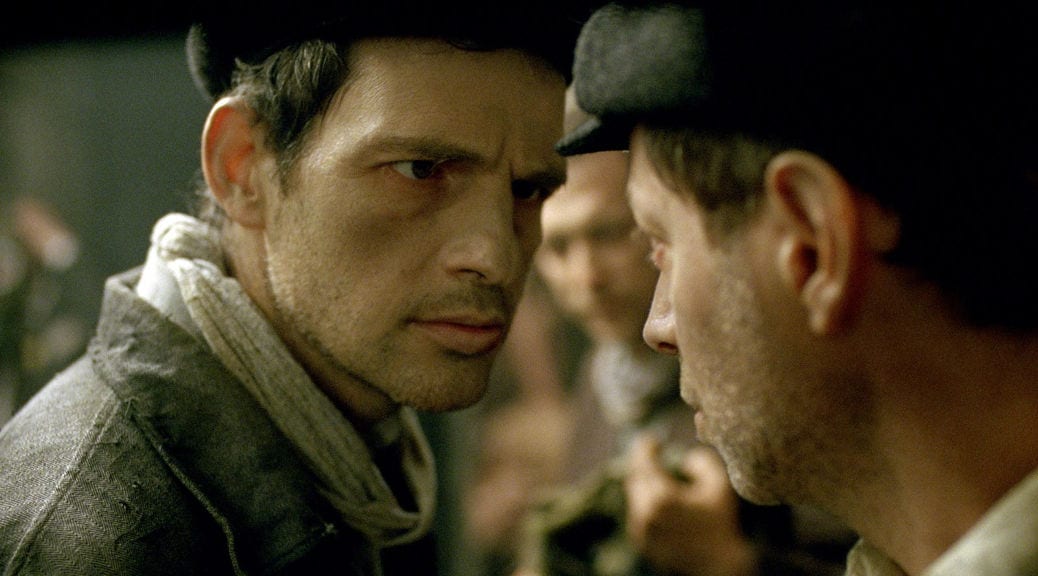 Son of Saul is the type of movie that has to be seen when the viewer in the right state of mind. Least they find themselves equally as trapped within the films tight compositions, as the titular Saul. A Jewish–Hungarian prisoner held within the confines of Nazi extermination camp Auschwitz, Saul Ausländer (Géza Röhrig) works at the camp as one of the infamous Sonderkommando. He aids Jews into the gas chambers, fed on lies of work and food, before recovering valuables and cleaning the area. A job with the only true reward being death, Saul works his operations with a bitter dispassion. One day he witnesses a boy who does not completely succumb to the gas. A flicker of recognition occurs as the boy is euthanized. It is here where the real story starts.

This is more than a difficult film to watch. It is at times a feature which is far easier to respect than to “enjoy” in a conventional sense. This doesn’t make Son of Saul any less important in its message. The sheer fact that its home video release comes at a time in which our own government’s distorted motivations and torrid in fighting have caused our leaders to lose sight of why they govern is one of deeply disturbing coincidence. It is in a film such as this, which remind us why many cannot allow governance do descend into some to the childishness which has occurred during the last few weeks. The film adeptly describes the worst things that can happen when such narrow mindedness allows evil to fester.

Son of Saul also shows humanity can be at its best, even when seemingly at its weakest. Saul’s knowledge of the boy’s heritage, has the prisoner embark on a campaign to rescue what’s left of his soul. What may seem like a pointless task quickly becomes a profound mission to remind us of what it means to be human. As we learn more about the history of Saul, the boy and the simple, yet affecting moral quest, we are once again made aware of what rights that we are lucky to have. Particularly with that of our last rites. Something which we are no witness to and yet hope for those left behind to respect and grant for us as we leave this existence.

This may be a debut piece, but it’s assuredly handled by director László Nemes. Its main visual conceit; boxing Saul within a tight 4:3 frame while retaining an incredibly shallow depth of field is something that could easily be considered as novel. However by obscuring the horrors that occur around its lead and utilising some extraordinary sound design work, we are often only left with the haunted and gaunt face of Saul as the weight of his role bears down on him. By staring into his face, we can only imagine the crimes that have been carried out, although the blurry, out of focus shots of naked bodies do much to inform us.

For all its technical bravado, it’s is the film’s quietest and simplest moments which provide the most emotional depth. From a near silent, low angled shot of Saul watching over the body of the child, to the simple framing of Saul’s face in detailed close-up. It’s a film which prises emotion from a viewer not with overwrought sentimentality, but with quiet, dignified modesty. It’s a film that can get so much out of very little.

While it was easy to get a little lost in translation with the film’s subplots during its second act (how I wish I could speak the various languages in the film many films I watch), it’s safe to say that it’s the images that do the work here. The films heavy yet redemptive climax ends with a character giving someone a small, sweet smile. After all we’ve seen, it’s an expression which becomes loaded with suggestion after the credits roll. Son of Saul is a difficult, yet rewarding experience. Many head to the cinema for escapism. Nemes urges us to remember. It wishes to imbue its viewer with a sense of perspective. Something that many have found so sorely missing recently.

Son of Saul is out on DVD on Monday 4th July