Dunkirk is almost a silent film. Dunkirk is a film that is a master class in the art of ‘show it, don’t say it’. Dunkirk, demands that you feel like you are on the front line with the soldiers. The audience is used as another stranded Tommy on the beach, forming an orderly queue, waiting […] 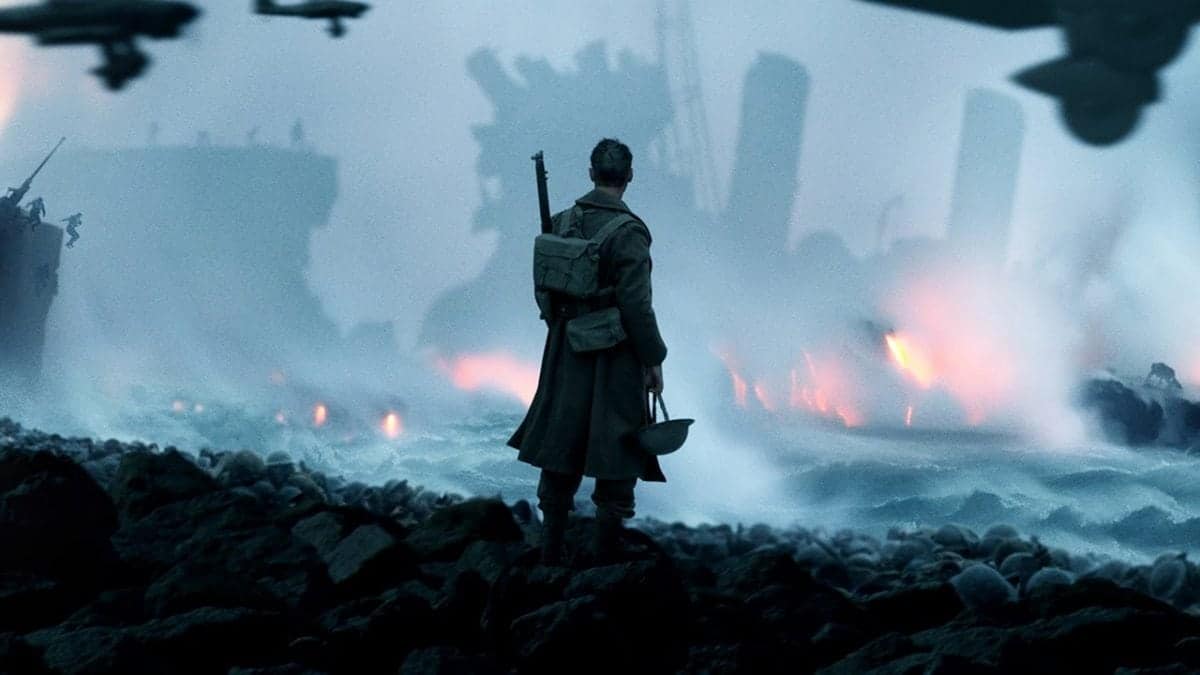 Dunkirk is almost a silent film. Dunkirk is a film that is a master class in the art of ‘show it, don’t say it’. Dunkirk, demands that you feel like you are on the front line with the soldiers. The audience is used as another stranded Tommy on the beach, forming an orderly queue, waiting to be rescued.

Dunkirk is an unapologetically British film. There isn’t an ancillary, and unnecessary, tale of love and romance to “cheer up”, and degrade the humbling truth of times gone past. There are no concessions to the international market. This is a British story told with British actors and (rightly or wrongly) it bypasses the importance of other nationalities in the battle of Dunkirk. This is a film that evokes ‘the Dunkirk spirit’, in an honest and non-bastardised meaning of the phrase.

It is a true ensemble piece, with each of Tom Hardy, Mark Rylance and Fionn Whitehead all arguably lead actors in their own pieces, and fantastic actors at that. Rylance is the literal representation of the Dunkirk spirit, he is as assured and tonally perfect as ever. Tom Hardy plays the brave Spitfire pilot giving a performance mostly just using his eyes, which is all the more impressive for it. Fionn Whitehead has the hardest job, having to embody the 185,000 British troops that would end up evacuated from Dunkirk. His performance is terrific and the real sense of danger and peril he and his fellow soldiers are going through is clearly expressed through his performance.

Christopher Nolan’s Dunkirk is not a war film that follows traditional war film methods. This is not Hacksaw Ridge, which was part Hallmark Movie, part gore-fest. This is not a war film, where a soldier removes a crumpled photo of a loved one to ram home the importance of what is being fought for. It is always clear what the soldiers are fighting for. The enemy is faceless, the enemy and perhaps most important character in the film is the creeping dread of annihilation.

Dunkirk is divided broadly into three sections; Land, Sea and Air. The narrative is triptych but time has an elastic quality. Nolan has often worked with time as a construct, notably in Memento and most obviously in Inception. The differing sections are given time frames: one week, one day and one hour. It is up to the audience keep up with each narrative strand. This is typical of a Nolan film. He is a director that believes the audience are intelligent enough to understand how his films are constructed. The art or craft in this is being able to ensure this as a passive act from the audience. The subtly timed flashback and the jump forward with just enough narrative, ensure that this possible.

I saw Dunkirk projected in 70mm IMAX and seeing a film projected beyond your natural field of vision with the crystal clear reality of an IMAX camera roots you in the space of the film. The sense of beyond in such an enclosed space during the Air strand added an element of reality past what I have seen in a war film before. I have not seen the film projected in any other format but I would think that this feeling would not be lost in a more standard format.

The opening shot of the film is of a handful of soldiers walking the deserted streets of Dunkirk with flyers falling from the sky. The flyers let the soldiers know that they are surrounded. The premise of the film is clear from this: the enemy is closing in, the soldiers need to retreat or face annihilation. This is not a story we are used to seeing, this is not heroism in the typical way audiences understand it. Dunkirk is asking the audience to understand the genuine heroism in an organised retreat. By the end of the film, this goal has been fully realised.

Reinforcing the relevance of silent cinema is the film’s score. Hans Zimmer has produced a score that allows the tension and desperation of the character’s situation to be constantly elevated with each passing minute. The opening rhythmic staccato ticking, invoking a countdown to an explosion, metronomic in its use, leads the audience to expect there to be a conclusion; a rise and fall. The fall doesn’t come. You realise that the opening sound is there as a way of getting the film in time, pulling it together, it is the film drawing breath and when the first, almighty gunshot reverberates, it’s away.

You can’t stop it, you can’t fight it and you can’t slow it down. You have to keep watching, you want it to end, you want the soldiers to survive. You don’t know if they will, you hope Mark Rylance’s character saves as many soldiers as he can, you want Tom Hardy to shoot down every last screaming Messerschmitt, you want every last Tommy home and safe.

Christopher Nolan has made a blockbuster film that is pulsating and cerebral. It is a masterpiece of war filmmaking. I urge you to see it on the biggest screen with the best sound system possible.