★★★★☆ Rarely has a nation been depicted with as much horror as the civil war torn Ukraine of director Sergei Loznista’s Donbass. The film is built around thirteen loosely connected vignettes that explore the mid-2010s conflict between Ukraine and the Russian backed Donetsk People’s Republic. The result is a chaotic and darkly comic look at governmental […] 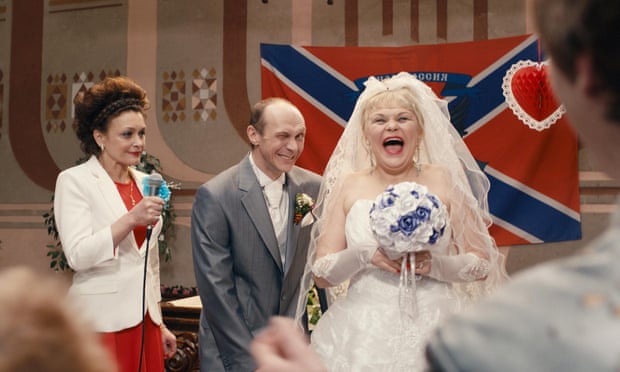 Rarely has a nation been depicted with as much horror as the civil war torn Ukraine of director Sergei Loznista’s Donbass. The film is built around thirteen loosely connected vignettes that explore the mid-2010s conflict between Ukraine and the Russian backed Donetsk People’s Republic. The result is a chaotic and darkly comic look at governmental corruption, media manipulation, and the military-run state.

The scenes focus on the conflict zone and how different sectors of society intersect with it. Displaced citizens are confronted by aggressive border guards, religious groups face unsympathetic government officials, and fake news reports appear on televisions in damp bomb shelters. The effect is to show a collective dehumanisation where no individual is privileged over another.

The film’s tone is unrelentingly bleak but there are moments of absurdity and dark humour to break up the underlying sense of terror. Following a horrifying sequence where a man accused of being a fascist is tied to a lamppost and taunted by the public, the film shifts to a bizarre and game show-like wedding where the couple take the surname “Fried Egg”. Even in this more light-hearted and amusing scene Loznista’s satirical outlook is not lost. At the height of the celebrations the groom declares that she will give birth to a boy with a machine gun. It is further evidence of the pervasive influence of a society built on corrupt and violent foundations.

The lack of an overarching narrative does break emotional involvement in the film, with characters disappearing just as you begin to empathise with them. Donbass isn’t necessarily about specifics but the environment of fear and conspiracy that has took over the Ukraine. The great achievement of Loznista is to take thirteen mostly disconnected story lines and to create a film that is never disjointed. He displays a real command of cinematic style and technique and often the crowds resemble a choreographed dance rather than an unruly mass.

Often there is more behind the composed crowds than at first it might appear. Government backed media propaganda is never too far away and some of the angered masses are actually extras coordinated by the television news companies. At another point a local government official has excrement thrown at him after being accused of planting false stories in the newspaper. Combined with the overseas journalists who are threatened by border guards, there is a real sense of a government with plenty to hide.

While Donbass doesn’t tell a specific story, it gives a wider view of a country devoid of hope or possibility. The conflict which surrounds the area is all consuming and has filtered into every aspect of people’s lives. Sergei Loznista’s film may be dark and at times bleak but it is an important look at the impact of a war and world based on lies.