★★★★☆ This third documentary feature from Asif Kapadia in some ways combines themes from his first two; the sporting adulation of Ayrton Senna, and the drug fuelled descents of Amy Winehouse. Diego Maradona opens with a car chase, combining with a electro beat to ground the audience in the high octane eighties. After a difficult […] 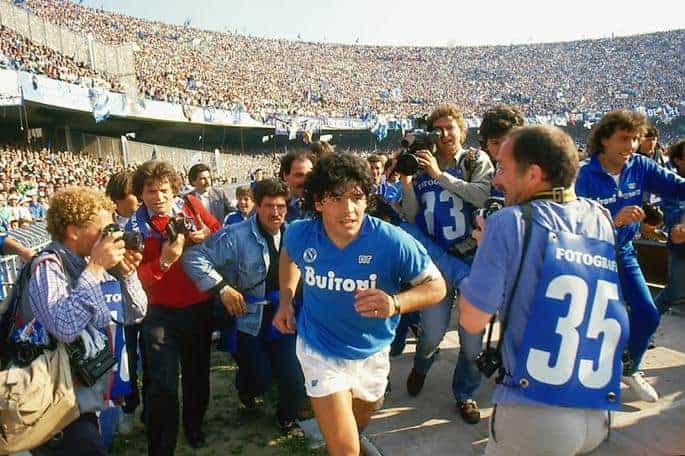 This third documentary feature from Asif Kapadia in some ways combines themes from his first two; the sporting adulation of Ayrton Senna, and the drug fuelled descents of Amy Winehouse.

Diego Maradona opens with a car chase, combining with a electro beat to ground the audience in the high octane eighties. After a difficult spell at Barcelona, Argentinian superstar Diego Maradona has arrived at luckless Napoli, a team in Italy’s poorest city and without a single league title to its name.

The film sits most comfortably with football fans such as myself, who know much of the name Maradona but comparatively little of his club career. As always Kapadia excels in using footage from the era to capture the tensions of the moment, notably when Napoli’s owner reacts furiously to a journalist’s suggestions of mafia influence in the city.

As always with exposing the hypocrisy of those in a position of power, from this moment it becomes almost inevitable that Maradona will fall into the clutches of the mob, and hooked forever by what Diego will become as associated by as his talents, cocaine. As defined by the film, within one man there is the cocky and hardworking kid from the Buenos Aires slums, Diego. Then there is Maradona, the cheat and wind-up merchant we all love to hate but gives the man a limelight necessary to succeed.

A difference between Diego Maradona and Kapadia’s previous subjects is that his addictions have not literally killed him yet, which does lessen the tragedy in the third act which defined his previous two documentaries. That isn’t to say Maradona’s fall doesn’t sting, not least in footage of bloody injections into his back; an irresponsible attempt to get the star to play through the pain.

As well as the demons of fame as ever there is Kapadia’s way of capturing the raw ability of those individuals presented. Diego Maradona is not a good man by any definition of the term, but his terrifying adulation evokes empathy in spite of it, and his skill garnering a perhaps reluctant if inevitable admiration.

Such is the leap into all things football with Diego Maradona, and the lack of a defining rivalry as Senna and Prost, I feel this is the first of Kapadia’s three feature documentaries to appeal more to the choir of those with an idea of Maradona’s life and the rules of handball than the completely uninitiated.

Regardless, the film shows there is more to this man than a World Cup game against England, and maybe even in this country that so reviles him Diego Maradona can show a little more of the Diego and his all too human foibles.