Review By Leslie Byron Pitt At 90 years young, Roger Corman is still shucking and jiving his way through the film world. He may no longer be in the director’s seat (Frankenstein Unbound was his last directed piece in 1990), yet this hasn’t stopped him from wearing his producer’s hat. A man well known for […] 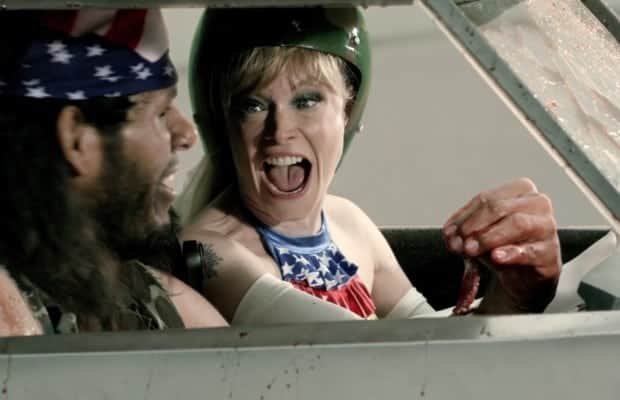 At 90 years young, Roger Corman is still shucking and jiving his way through the film world. He may no longer be in the director’s seat (Frankenstein Unbound was his last directed piece in 1990), yet this hasn’t stopped him from wearing his producer’s hat. A man well known for being an important stepping stone for burgeoning Hollywood talent, Deathrace 2050 has Corman giving fledging young director; G.J. Echternkamp a chance to get his teeth into Corman’s own brand of cheap, high camp action filmmaking. We don’t go to a Corman film for Sophie’s Choice. We go for a kind of winking schlock that only a man like Corman loves to provide. Seeing that the man is nearing a century, it’s slowly dawning on some that this kind of cult trash may not have someone to pick up the mantle in the future.

Death Race 2050 is not a good film but is a strangely entertaining one. A soft reboot of Corman’s 1975 political satire Death Race 2000, much like the original film is a cheap sugary hit of cartoonish nonsense. The plot is bobbins, the cast is overegged and it’s clear that the film was made (as with most Corman films) swiftly with minimal expense. It both looks and plays out very cheaply.

That said, there’s enjoyment to be had if the viewer is into that sort of thing. It rattles at a brisk pace and the general silliness is enough to entertain if caught on the right wave. More so if a viewer remembers the oddball fun of the original feature. Its anarchic message against totalitarian governments is cumbersome in execution, yet often hits some salient and amusing points. It’s a film which passes the Bechdel test and informs the audience of this by naming a bar after it. At first the film displays characters as broad stereotypes before inverting the proceedings for “da lolz”. Everything is done with the sort of cheeky nod that one would expect in a comic film about murdering pedestrians in a cross country race.

The problem with Death Race 2050 isn’t so much what the satire is aiming for (sorry Trump, you became President at the right time for this), but at its necessity in a world where more muscular B-Movies such as The Purge (2013) are driving home similar messages with (just about) more coherence. The humour here should bring round a chuckle or two, but this is a film which is going over the same moves as Corman’s original Death Race 2000 but without Sylvester Stallone sightings or David Carradine. It’s not that Death Race 2050 doesn’t while away 88 minutes, it’s wondering why one would watch this version if they already have Deathrace 2000.

This question does take away some of the fun factor from Death Race 2050, which is undeniably silly and unapologetically trashy. However, Deathrace 2050 feels like rummaging through the attic for your forgotten disc of Carmageddon. It might provide a quick laugh, but there’s a strong chance you may just jump back to Grand Theft Auto soon after.