By Emma Silverthorn @HouseOf_Gazelle Saved from triteness (just) by Al Pacino’s utterly gratifiying, larger than life performance, Danny Collins takes as its springboard the story of folk musician Steve Tilston who received a letter from John Lennon thirty five years too late. In an interview with a music magazine Tilston had expressed some fear over […] 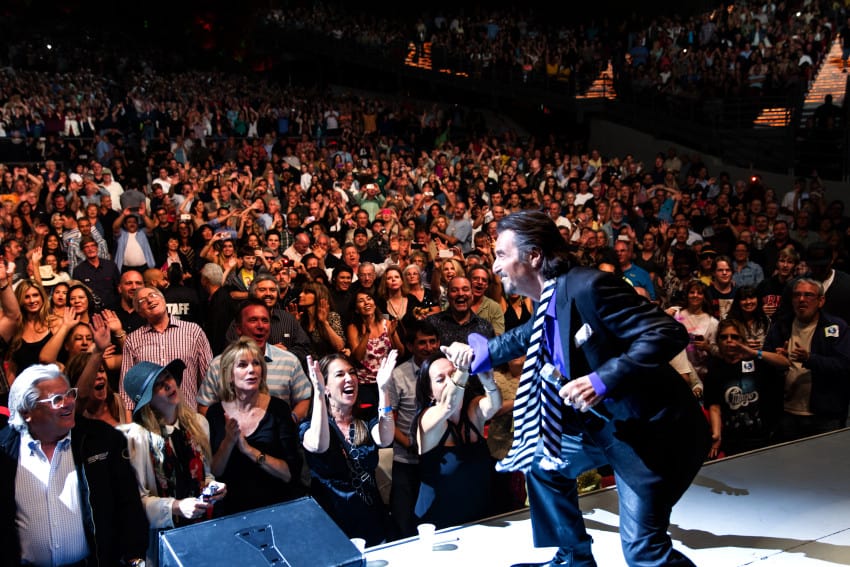 Saved from triteness (just) by Al Pacino’s utterly gratifiying, larger than life performance, Danny Collins takes as its springboard the story of folk musician Steve Tilston who received a letter from John Lennon thirty five years too late. In an interview with a music magazine Tilston had expressed some fear over the potentially corrupting power of the riches and fame integral to the rock-star trajectory.  Lennon took issue with this and wrote to then twenty one year old Tilston: ‘Being rich doesn’t change your experience in the way you think’ and signed off ‘Love John and Yoko’ with his phone number. This missed opportunity makes it movingly into the movie, when Danny’s best friend and manager Frank (Christopher Plummer), having discovered the letter on ebay, gifts it to Danny on his sixtieth birthday.

Since the days of Captain Von Trapp it still gives me a little buzz to see Christopher Plummer in virtually anything and Danny Collins is no exception. Here he’s the reformed drinker and brutally honest buddy of Danny, the one who knows of his friends darkness but more importantly knows about the massive heart he’s concealing underneath all the rock-star bravado and mind-altering substances.

However, aside from the truth of the letter the true story of Steve Tilston’s life and Dan Fogelman’s Danny Collins bear little resemblance. Tilston’s career in contrast to the fictional one realised in Danny Collins has assumed the form of a moderately successful folk-singer with almost twenty albums to his name, of the Ralph Mctell and Fairport Covention ilk, loved by those who know him but only known by a relative few. I saw Tilston at Cropredy festival playing with the Dubervilles in 2011 and it was an enchanting performance. Pacino’s performance is on the other hand a purposefully ridiculously mainstream one, playing to a fan base of sixty and seventy year old women who chew licorice in the front row of his stadium gig while he sings about his baby doll.

There seems to be two options for men in the world of the film; there is the coke-snorting, scotch-drinking, younger-women fucking rock-star (hiding the aforementioned, deep down big heart) route, or the nuclear family-man, good-husband and father, solid, Mets lover and good-old blue-collar construction worker, route. Danny of course pics the former and has a lot of self-destructive fun playing this role. Danny’s estranged adult son, Tom Donelly (Bob Cannevale), picks the latter as a response to his father’s bad example.

Bob Cannevale fits the good-son role perfectly large, hunk of meat, handsome man that he is. Most of the time pulling off this role well. Thankfully Fogelman doesn’t go too Hollywood and write a story in which this son too easily falls into the arms of his repentant father, (follwing forty years of little to no contact). There is at least a self-consciousness about the script, at one point Tom says to his father, ‘I’m sorry if this isn’t panning out like the movie in your head’.

Companion to good-husband Tom is his good-wife played by Jennifer Garner.  An early middle-aged and heavily pregnant version of the cool girl trope, seeming replacer of manic-pixie-dream girl, and I found her hard to warm to, though I realised the film was trying with all its might to make me do just that. And then there is Annette Benning, whose pretty much always great in everything and who is given some sweet and sometimes amusing ‘patter’ with Pacino.  Benning acts as the straight-forward, righteous yet not perfect, divorcee and potential saviour, or salve to all Danny’s wild ways, an antidote to all the mid-twenties floozies he’s apparently been doing for the past thirty to forty years. A Jiminy Cricket of a woman. It was mostly enjoyable to see these two on screen together, though I didn’t feel entirely convinced by this love interest.

This film is a big ball of corniness in many ways, absolutely aiming to tug on the heart-strings, aside from the poignancy of the missed Lennon letter, and the sorrow of the missed father-son years, there’s even a cancer plot-line, having said that it’s also (for the most part) downright pleasurable to watch. I watched it on a rainy London summer day in Soho and despite the jabs of cynicism I felt at points and on reflection, it was really a lovely way to spend an afternoon.

Danny Collins is out in cinemas this Friday, May 29th.