By Linda Marric @linda_marric There’s one thing Catfight director Onur Tukel cannot be accused of, and that thing is lacking in originality. However you chose to read his film, one thing is for sure, this curious little production manages to pack more punches and raise more laughs than the majority of comedies being made in […] 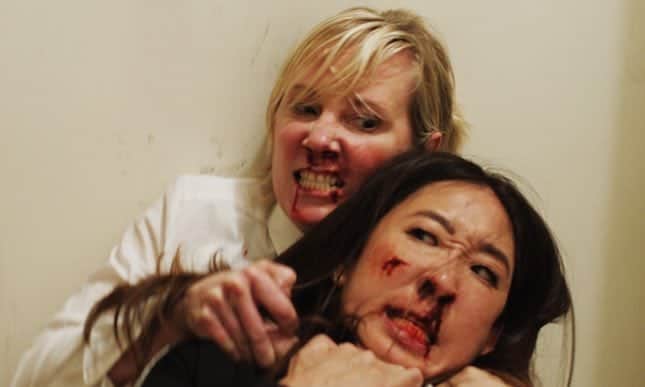 There’s one thing Catfight director Onur Tukel cannot be accused of, and that thing is lacking in originality. However you chose to read his film, one thing is for sure, this curious little production manages to pack more punches and raise more laughs than the majority of comedies being made in Hollywood right now. Divided into three main chapters, the film plays with ideas of femininity in a way that has seldom been depicted on screen before, and could literally be about dozens of things if one is prepared to deconstruct every element attached to its frankly bonkers narrative.

Struggling lesbian artist Ashley (Anne Heche) and shallow trophy wife Veronica (Sandra Oh) were at university together, but have since lost touch with each other and somewhere along the way became mortal enemies. The two find themselves attending the same cocktail party, Ashley as a waitress and Veronica as the wife of the richest man in the room. After exchanging the usual pleasantries, the women soon find themselves at loggerheads when Ashley confronts Veronica about the way she was treated by her at college. Insults soon turn into a full blown, all consuming violent fist-fight which lasts for years and spans over a decade of their lives.

Staring alongside Heche and Oh, is the always excellent Alicia Silverstone as Ashley’s baby-obsessed girlfriend, and a brilliantly dead pan performance from Dylan Baker as a coma doctor whose delivery of monotonous lines becomes the highlight of each of the chapters. The film makes a brilliant satirical commentary on sisterhood, or more importantly, lack there of. As the fight goes on, and people and relationships are lost forever, the only thing these women have is common is anger and resentment towards one another.

Catfight’s decent into the absurd will certainly be embarrassed rather happily by its audience, as a quirky surreal tale, not dissimilar to Yorgos Lanthimos‘ The Lobster (2015). Both films are set in heightened realities and rely on their audiences’ willingness to go along with the truly ludicrous narrative. The film is however not without fault, the lengthy fight scenes start to grate after a while and all we are left with are two women literally hitting each other for 90 minutes straight. Having said that, Tukel makes an interesting political commentary about war, the environment and more importantly the inability of women to see beyond their petty disagreements instead of supporting each other.

On the whole, Catfight is an enjoyable and quirky comedy with, what appears to be, a much more profound message attached to the silliness taking place on screen. If absurdism is your thing, then you will have no problem getting on with the story. If, on the other hand, you are looking for something more serious, then this certainly isn’t for you.

Catfight is on general release from Friday 10th March.