★★★★★ Ruben Östlund’s The Square won the Palme d’Or in 2017. A social satirist, he loves nothing better than to skewer bourgeois pretentions, masculinity or the art world. In his new film, Triangle of Sadness (2022), the Swedish director takes a bunch of brash and manipulative 1%ers on a voyage across the high seas and […] 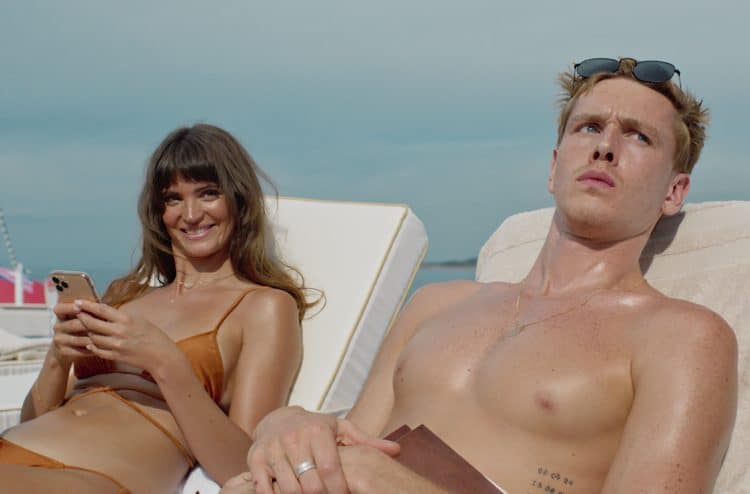 Ruben Östlund’s The Square won the Palme d’Or in 2017. A social satirist, he loves nothing better than to skewer bourgeois pretentions, masculinity or the art world. In his new film, Triangle of Sadness (2022), the Swedish director takes a bunch of brash and manipulative 1%ers on a voyage across the high seas and uses the framing device to explore class oppression and what happens when the elites don’t get their way.

Told in three parts, featuring an international cast including Woody Harrelson and Harris Dickinson, Östlund’s targets this time around are the upper set who treat anybody beneath their rarefied strata like they’re either invisible or simply there to cater to their every whim and demand. Mike White’s acclaimed HBO series, The White Lotus, which aired in 2021, did something similar.

When the cruise hits a bit of chop, Triangle of Sadness veers into Monty Python-style vomit gags and brings a whole new meaning to the seafaring term ‘poop deck’. The socialites end up sliding around in their own projectile filth (coming out of both ends), while desperately trying to keep up appearances. Östlund also uses the ship’s structure to evoke the class system and the floundering vessel could well symbolise our directionless world, the lack of vision for the 21st century, as much as capitalist elitism and excess. When pirates attack and the boat subsequently scuttled by an explosion (read: the system is smashed), the few survivors wash up on a deserted island. Abigail (Dolly De Leon) emerges as the leader, a woman who cleaned the toilets below deck, is now their figurehead and she soon turns the tables and sets about manipulating the useless toffs because they really can’t do anything for themselves. They’re like big babies. They’re like the Elois from H.G. Wells’ The Time Machine (1895).

What’s daring about Abigail is, she isn’t meek or nice or especially rough or threatening. She’s not a working-class stereotype. Neither is she any kind of heroine to root for. It isn’t a matriarchy she establishes but a dictatorship. Östlund will not condescend or stoop to making left-leaning comfort blanket arguments either. By now, the story has transformed anyway into reinforcing a bleak point about the general human condition, power and corruption infecting human thinking. Neither do the survivors see Abigail as a fellow human being, a person, they cannot rewire their ingrained prejudice when it would well benefit them to do so. Like characters from a Buñuel film, they seem trapped by an invisible barrier, inert, content to sit on their arses and wait to die, believing they’re so important somebody will come along, rescue them at any moment, that they don’t need to lift a finger to save themselves.

The ‘Triangle of Sadness’ is explained as the crease in a furrowed brow above the bridge of the nose, but it’s clear Östlund thinks it’s a good symbolic expression for the class system and how humans seem programmed to divide and conquer, play power games, whatever political aisle they occupy. Abigail might be queen of the island and have them in the palm of her hand, but to what end?