★★★★☆ Are you ready to feel the need for speed again? Top Gun: Maverick (2022), arriving 36 years after the Tony Scott original, is a fly into the danger zone you won’t forget in a hurry. While it’s had more delays than a Ryanair flight to Malaga, the wait is definitely worth it. If when […] 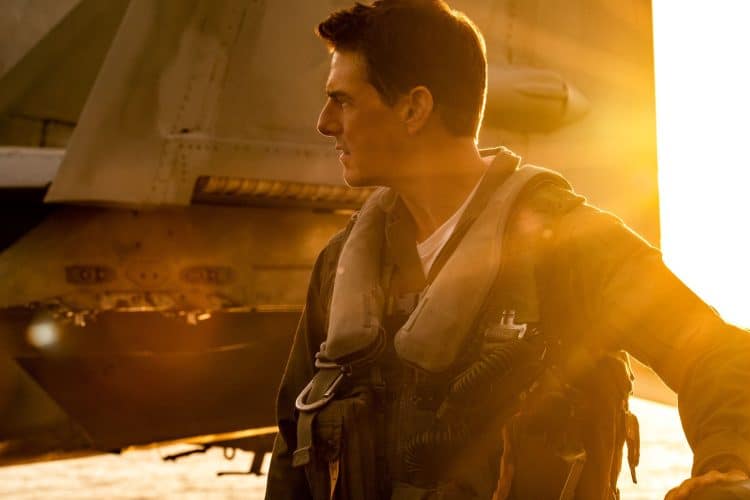 Are you ready to feel the need for speed again? Top Gun: Maverick (2022), arriving 36 years after the Tony Scott original, is a fly into the danger zone you won’t forget in a hurry. While it’s had more delays than a Ryanair flight to Malaga, the wait is definitely worth it. If when Covid hit, Hollywood studios panicked, and put tentpole blockbusters out as Video On Demand releases, Cruise, as the film’s producer and a powerful industry figure, was adamant the follow-up to the beloved actioner would be available to rent online over his dead body. The man is passionate about the big screen and the communal experience of movie-going.

The first surprise in this blockbuster sequel is the elegiac tone. Early on, we get the sense everybody got bored of Pete ‘Maverick’ Mitchell’s cocky shtick a long time ago. In the present day, he’s an experimental test pilot still pissing off top military brass, but also a lonely man continuing to be haunted by events in 1986’s Top Gun (meaning: the death of best mate and co-pilot, Goose, played by Anthony Edwards). For all his bravado and the mythological status attached to his name, Mav doesn’t have any friends and lives alone out in the desert.

The film begins exactly like the first. We get the moody Harold Faltermeyer score and bit of text telling the viewer exactly what Top Gun is (an elite school for pilots) then it segues into Kenny Loggins’ 1980s banger Danger Zone and shots of jets taking off from an aircraft carrier at sea. It’s a clever opener, a remix of the past immediately plunging us right back into that highly stylised fantasy world. In 2022, though, it is shorn of any Reagan era pomp, militaristic fetishism and sense of Cold War American might.

Joseph Kosinski proved his action cinema chops on films such as Tron: Legacy (2010), Oblivion (2013) and Only the Brave (2017), but boy oh boy has he raised the bar here. Top Gun: Maverick quite simply boasts some of the most astonishing screen spectacle you’ll likely have ever seen. The dogfighting, the training games, the outlandish and hair-raising manoeuvres are the definition of jaw-dropping aviation and stunt work. But none of it would work without the close-ups of pilots in their seats, their eyes communicating a range of emotions as their faces are largely obscured by the oxygen masks. Whether it’s jets streaking across wide open frames or putting the camera in the cockpit, the result is electrifying.

Back to that crucial elegiac mood permeating Top Gun: Maverick. Like an old cowboy, a person more myth than man, Captain Mitchell is roused from his isolation for one last mission, allowing him a shot at some kind of redemption and to reconcile with the past. The emotional maturity of Kosinski’s movie sits in stark contrast to the brashness of the Scott classic, making them a fascinating diptych: the folly of youth transformed into the wisdom of old age. Maverick’s last ride is both supremely entertaining and unexpectedly moving. The film is dedicated to the late Tony Scott.