★★★★★ Humans are changing. Humans are … evolving. In David Cronenberg’s Crimes of the Future, people have started to grow extra organs in their bodies, whose functions are yet to be discerned. Some, like Saul Tenser (Viggo Mortensen), have used this biological development for a new type of performance art. Along with Caprice (Lea Seydoux), […] 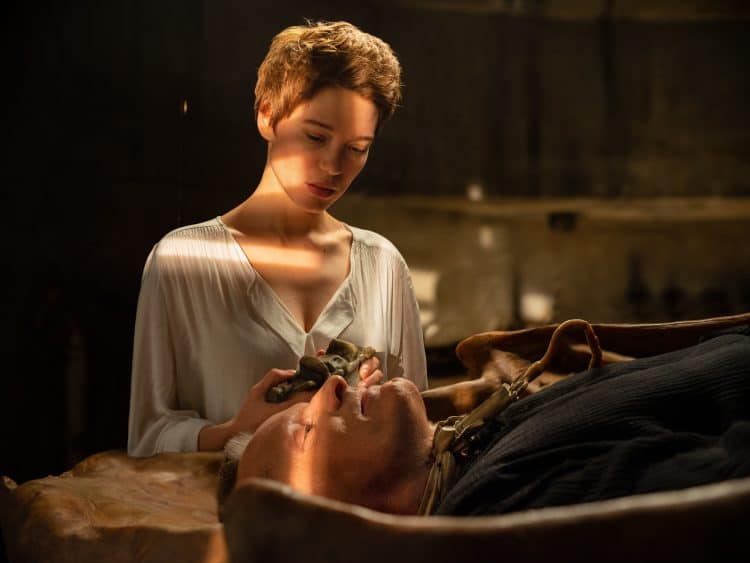 Humans are changing. Humans are … evolving. In David Cronenberg’s Crimes of the Future, people have started to grow extra organs in their bodies, whose functions are yet to be discerned. Some, like Saul Tenser (Viggo Mortensen), have used this biological development for a new type of performance art. Along with Caprice (Lea Seydoux), a former surgeon turned fellow artist, Tenser allows his collaborator to cut open his body with a biotechnological machine, probe around and extract tumours and neo-organs growing inside. All in front of a paying audience.

Crimes of the Future is Cronenberg going back to his body horror roots, for sure, but the enigmatic style in which it is told matches his latter period. In other words, this is not a nostalgia fest for days of gore, this isn’t a Videodrome redo, but representing an evolution in the Canadian auteur’s own aesthetic, a culmination of his preoccupations, but also a fusion, he is seeing things in a new light, serving a new vision. Wonder and intrigue has replaced fear and alarm.

In Dave Deprave’s grand return to cinema, the old world is dying. Nobody feels pain anymore and we’re told “surgery is the new sex” and “body is reality” – typically Cronenbergian slogans. Crimes of the Future is as much a sensual dream of desire and experimenting as much as it is a freaky nightmare about physical alterations, artificial and natural, Cronenberg reminds us of a salient truth about the human body: we are not perfected creatures, we do not exist in our final form.

Where once, though, such a revelation might have been mind-altering and terrifying beyond all reason, older Cronenberg renders the issue with a serene calmness and fitting curiosity. Saul is never frightened by what his body is doing, only ever interested in the relationship. This is body over mind, boldly unafraid of transformation. Yes, Cronenberg is reminding the audience, the meat and amassed goo inside us all, is infinitely more mysterious and cosmic as any highfalutin notion of a soul.

Crimes of the Future is a somewhat misleading title too, for the crimes aren’t to do with the body transforming in myriad ways, but the organisations and governments repulsed by the evolutionary step and their attempt to block all this from happening. A government agency is set up, the New Vice Unit, which Kristen Stewart’s Timlin works for, and they begin to monitor and catalogue neo-organs, building an archive, an atrocity exhibition, a cabinet of morbid curiosities. Nerdy bureaucrat Timlin finds herself being seduced by Tenser’s art and discards her old ideas and notions about humans, bodies and sex. Much to her shock, Tenser’s explorations of his viscera excite her.

Set in a decayed seaside town that looks like a Max Ernst landscape painting come to life, David Cronenberg’s latest might well be a wholesale rejection of ‘body horror’ itself as a term. It’s too negative. Too conservative. Too restrictive. Crimes of the Future is more ‘body mystery’, the director himself evolving his opinion of the subgenre of horror he made his own. He is now, almost 80, and clearly critiquing his filmography. In its final shot, we are shown a future progression at once daunting, open to abuse, control tactics, but settles, arguably, for hopeful, and a radical new pathway is mapped out, new possibilities beckon. Crimes of the Future is therefore not dystopian sci-fi, but utopian.