Bounding along some five months after the release of The Last Jedi, Solo: A Star Wars Story is a film that appears to have been reverse engineered in the hopes of appeasing those few asinine fanboys who are still reeling from Rian Johnson’s forceful attempt to do more than simply pay homage to their beloved […] 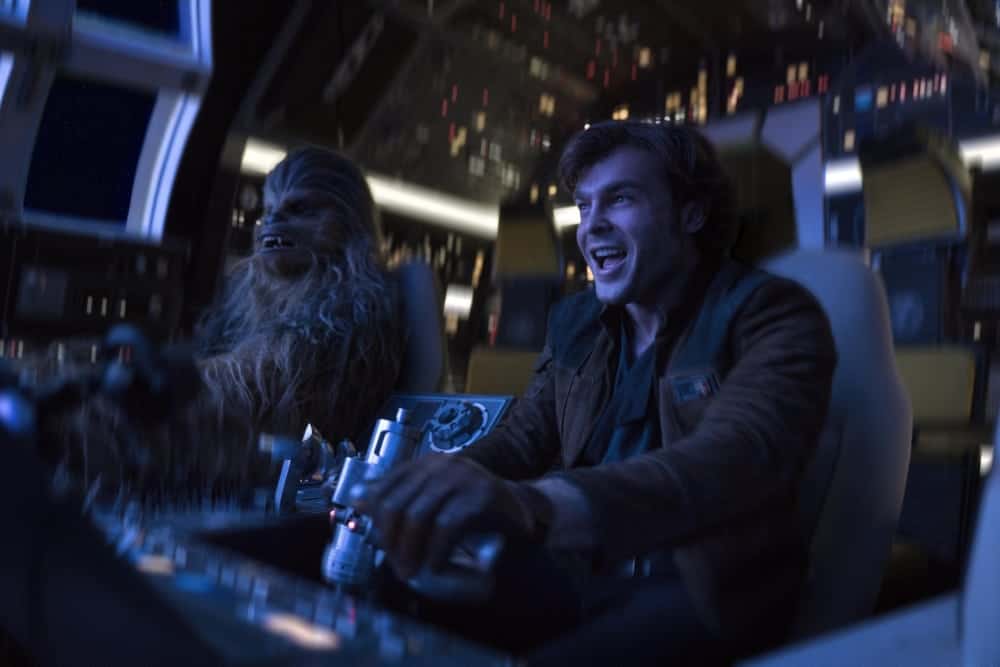 Bounding along some five months after the release of The Last Jedi, Solo: A Star Wars Story is a film that appears to have been reverse engineered in the hopes of appeasing those few asinine fanboys who are still reeling from Rian Johnson’s forceful attempt to do more than simply pay homage to their beloved saga.

Adopting the spirit of a plucky underdog, Solo is a scrappy, sweet-natured entry into the franchise, but one that never feels entirely sure of itself. Relying on a number of expositional title cards to set the scene, we’re transported back to the heady days before the Galactic Empire had control of the galaxy. On the planet of Corellia, Han (Alden Ehrenreich) and his partner Qi’ra (Emilia Clarke) spend their lives running from the authorities as smugglers for a local crime syndicate, waiting for the day they have enough money to escape their home and explore far off worlds.

Han’s plan is to one day be the best pilot in the galaxy, a dream he sets out to pursue having become separated from Qi’ra indefinitely; first as a Galactic soldier, and then later as part of a crew led by Woody Harrelson’s grizzled career criminal, Beckett, who has just been hired by a local kingpin (Paul Bettany, staking his claim as one of the saga’s strongest villains to date) to retrieve a particularly precious chemical weapon.

It was, perhaps, inevitable that this would be the first instalment since the series relaunch to choke under the pressure of expectation. Back in June 2017, original directors Phil Lord and Chris Miller (the minds behind The Lego Movie, and the revamped Jump Street franchise) were dismissed unceremoniously by Disney, citing “creative differences”, and Ron Howard was brought on board; a capable director, although hardly a creative with distinctive vision – tellingly, the film feels very much of a piece with Lucas’ 1977 original. Having had to reshoot up to 80% of the footage, it clearly belongs to Howard, although there are still echos of Lord & Miller’s work.

Ehrenreich is certainly fine in the titular role, once he allows himself to relax that is: his stiffness in the early scenes eventually laying away to a cocky swagger that’s infectiously charming. But it’s the supporting cast who garner the greater influence – most notably Donald Glover, who plays Han’s smooth-talking rival Lando with a rhythmic energy, and Phoebe Waller-Bridge, who injects some affable moments of levity into the mix as Lando’s freethinking droid-counterpart, L3.

Curiously, it’s Howard who looks to be most out of his depth. While those gloriously retro promo posters channelled its hero’s roguish charisma, the direction is rigid and unsure. The colours rarely pop – the aesthetic murkier, drearier than expected. And narratively speaking, there’s a tonal sense of apprehension; an unwavering need to pay service to the fans by following a checklist of sequences & events – including first meetings with Chewie (Joonas Suotamo) & Lando, and inevitably the discovery of the Millennium Falcon. Howard rushes through these scenes at lightspeed, always keen to refocus our attentions back onto the busy plot, or get to the next set-piece; the highlight of those being a riotously entertaining heist scene set within the tunnels & control area of a mining colony. The endgame, it would appear, isn’t to offer a discursive bit of background on our favourite flyboy, but to instead tee up another trilogy. Based on the evidence provided, this is probably something we should all have a bad feeling about.