“Dis joint is based upon some fo’ real, fo’ real sh*t.” The story of Colorado detective Ron Stallworth is one of those true-life tall tales that’s just so strange it couldn’t be fiction, and in the hands of Spike Lee it proves to be pure dynamite – the director returning to the Croisette for the […] 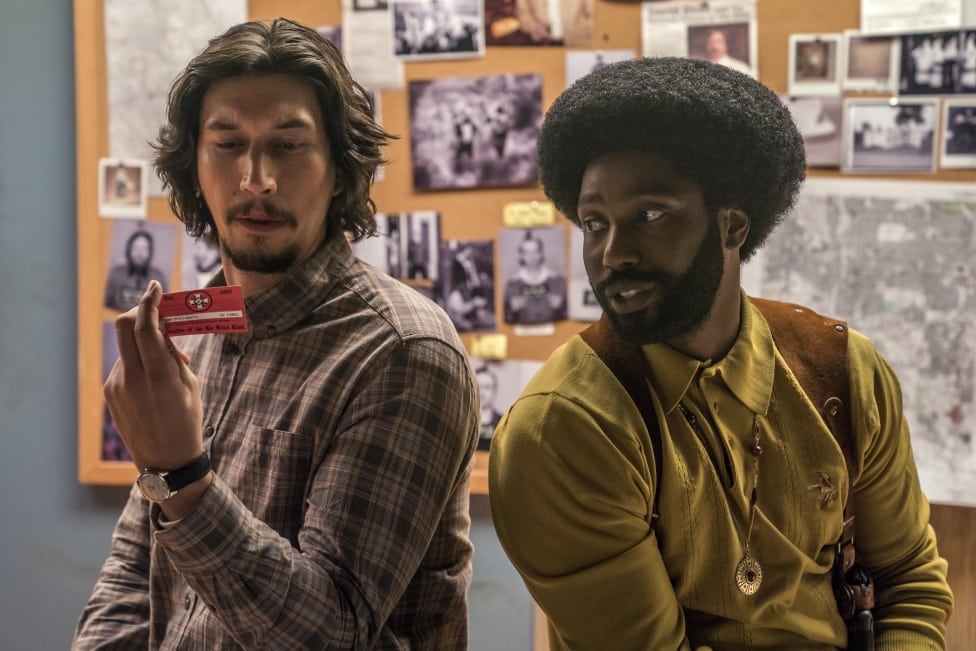 “Dis joint is based upon some fo’ real, fo’ real sh*t.” The story of Colorado detective Ron Stallworth is one of those true-life tall tales that’s just so strange it couldn’t be fiction, and in the hands of Spike Lee it proves to be pure dynamite – the director returning to the Croisette for the first time since 1991, to inject some much-needed energy into a somewhat lifeless Cannes Film Festival.

Stallworth – played with charismatic charm by John David Washington, son of Denzel – joins the Colorado Springs Police Department in the late 70s. The violence of the 1960s may have dissipated, but the prejudices remain in place, with fanatical white supremacists fearing the rise of an integrated society. Indeed, the film actually opens with a wry cameo from Alec Baldwin, playing a belligerently outspoken racist who outlandishly monologues about how this step towards racial unity is turning America into a “mongrel nation”.

Assigned as an intelligence officer, Stallworth’s first mission is to go undercover at a Black Power rally where BPP member Kwame Ture (a fierce Corey Hawkins) is due to speak. Like everyone else in the audience, Stallworth hangs on his every word – the low-angle, backlit shots of Ture as he preaches to the crowds, reminiscent in stature to the figure of Luther King. By the end of the speech, Stallworth is radicalised to the idea of “all power to all people,” and begins exploring ways to hit back at those who want to suppress his voice solely because of the colour of his skin.

Aided by his partner, Flip (Adam Driver), Stallworth devises a plan to infiltrate a local chapter of the Ku Klux Klan. Posing over the phone as an Aryan brother without a brotherhood, he manages to convince the Klan members to meet with him to discuss membership. Unable, obviously, to go himself though, Flip is sent undercover in his stead. Before long, Stallworth’s vocal and Flip’s material devotion to the “Organisation” have garnered the attention of the KKK’s Grand Wizard, David Duke (Topher Grace).

Following on from his striking, if more scattershot 2015 urban musical, Chi-Raq, Lee appears to have found himself invigorated by Stallworth’s story. Its sound & style is lifted straight from the Blaxploitation movies of the 70s, riffing on those films with a cheeky confidence that leavens the tone. And Lee seasons the script generously with a riotous, sardonic humour, much of it at the expense of the current White House incumbent – like Trump, David Duke also talks about making “America achieve its greatness again.”

Lee isn’t known for his political subtlety, but even by his standards this strikes one as being markedly explicit. But then again that is the point; references are made throughout to the fact that D.W. Griffith’s The Birth of a Nation was a mainstream blockbuster that swayed popular opinion at the time, and you get the impression that BlacKkKlansman is Lee’s way of playing Griffith at his own game. With devastating resonance, he chooses to close the film with footage from the 2017 Charlottesville rally; considering America’s past, while challenging its present.

Another particularly arresting sequence juxtaposes imagery of KKK members chanting “White Power”, with shots of the Black Power group stridently intoning their own mantra, emboldened by stories of the suffering faced by generations past. There’s a vital, confronting ferocity to such scenes, but also a steely sense of foreboding; a suggestion that to bring about real change, what must be stressed most of all is the need for education and communication. BlacKkKlansman is a film fuelled by rage, but crucially it is never one that’s blinded by its anger.