By Michael McNulty Cary Murnion and Jonathan Milott deliver a dud in action thriller Bushwick. Lucy, Pitch Perfect’s Brittany Snow, emerges from a New York subway in Bushwick, with her boyfriend, off to visit Grandma. When a burning man runs through the ticket hall, the two realize something is amiss. Upon investigation, Lucy’s boyfriend is […] 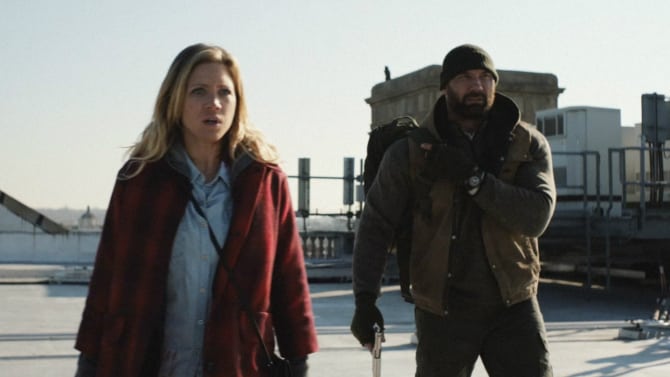 Lucy, Pitch Perfect’s Brittany Snow, emerges from a New York subway in Bushwick, with her boyfriend, off to visit Grandma. When a burning man runs through the ticket hall, the two realize something is amiss. Upon investigation, Lucy’s boyfriend is swiftly blown up, his body reduced to a smouldering mess of charred flesh. Bushwick is under siege by mysterious militants sporting black riot gear and heavy machine guns. With nowhere to go, risking life and limb, Lucy ventures out into the bad lands, only to find herself trapped by a pair of thugs who are ready to have their way with her until she is saved, in the nick of time, by the hulking Stupe (Dave Bautista of Guardians of the Galaxy).

The two team up and discover that the rampaging militia have invaded New York in order to force the secession of the southern states. They also learn that the US army is evacuating people from a demilitarized zone in a nearby park. With this their only chance of survival, Lucy, now also with sister in toe, and Stupe try to make their way across town to safety.

Bushwick is about as thrilling as a trip to the supermarket. It completely fails to build any tension, a phenomenal accomplishment considering the film’s premise. The camera work is fast, fluid and frenetic as it follows its characters as they dart between rundown buildings and burnt out cars and still somehow the film feels sluggish and uninvolving.

In an attempt to heighten the reality and emotional experience of its characters, the film is shot in a single, unbroken take à la Birdman, but without any of the finesse. So distracting are the “invisible cuts” you spend a majority of the film pointing them out. The camera is constantly being forced into corners, walls and dark spaces in a futile pursuit to maintain the illusion that there are no cuts. Really, why bother?

You’d be willing to forgive all this if the characters were engaging. But, both Lucy and Bautista share the emotional depth and character development of a dead fish and their acting is on a similar par. With films where characters are playing catch-up with a situation, capturing that panicky confusion is a real test of scripting and acting ability, which demands a level of commitment from all parties in order to sell “it.” This doesn’t happen and half of Bushwick seems to be wide-eyed Lucy filling dead space in both the script and her performance with “what’s going on” and “what is this.”

Dave Bautista’s former marine corpsman turned janitor (get it, different job, but he’s still cleaning up other people’s messes?) is the only character with any real potential. But, a confessional in a Laundromat, played out in a cringey, let me speak my pain through gritted teeth, is so expositional the scene would have fared better if the director’s had inserted the monologue on a title card and let that run for a minute.

Bushwick is disappointing at best, especially considering Murnion and Milott’s previous feature, Cooties, a successful genre blend of horror-comedy that, although lacking in parts, seem to at least point towards something greater. Bushwick is not that.

Bushwick is in cinemas from Friday 25th August.