By Ellery Nick @Ellery_Nick After the success of Red Violin and Thirty Two Short Films About Glenn Gould director François Girard returns once more to the realm of music, this time accompanied by a choir of young male sopranos. Along for the harmonic capers is a supporting cast that includes Dustin Hoffman, Kathy Bates and […] 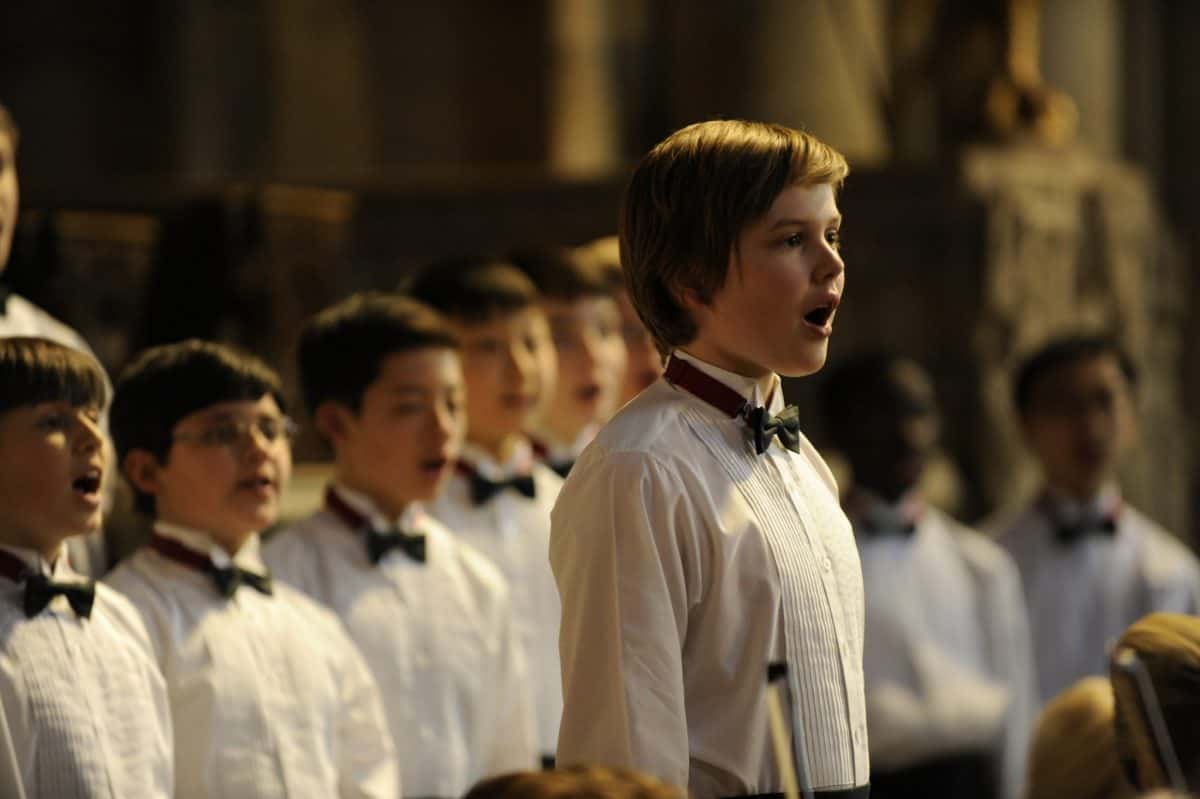 After the success of Red Violin and Thirty Two Short Films About Glenn Gould director François Girard returns once more to the realm of music, this time accompanied by a choir of young male sopranos. Along for the harmonic capers is a supporting cast that includes Dustin Hoffman, Kathy Bates and Eddie Izzard. Safe hands all round.

We know how this one goes: Talented boy from wrong side of the tracks enters a Hogwartian world of angelically voiced, toffee nosed little pricks. He there encounters a taciturn teacher who pushes him hard, but gets the best out of him. Elsewhere an absentee father must make a hard choice between facing up to his past and the future he owes his son. It seems then that we are in safe hands and familiar territory. Perhaps that’s why no one went to the trouble of telling a plausible story.

Tough kid, Stet, has been busy caring for his alcoholic mother until she dies in a car crash. Things weren’t perfect, but they were all each other had. During his mother’s funeral, from which Stet is fifty feet away, a former teacher chats with him and his newly conjured father about whether he should go to an elite singing school. The father wonders what this has to do with him and admittedly it is curious why he has decided to turn up, possibly Stet would like to get back to the proceedings before things are wrapped up, but cannot, because his impetuous teacher is still busy blackmailing dad. Consenting to his part, dad, played by Josh Lucas, drives his new son to the most prestigious choir in the country, props him up before Master Carvelle, the school’s pre-eminent choirmaster and tells him to sing. Grudgingly, the maestro played by Dustin Hoffman, admits that the boy has talent, but there’s something indefinably wrong with his attitude. Drake, Eddie Izzard’s choirmaster-in-waiting, suggests that he’s too old.

Not to harp on about it, but Stet’s mum is dead. The funeral was yesterday, possibly even that same morning depending on how far Stet’s abandonment-hungry father was willing to drive. Boychoir has a shockingly shallow interest in its own logistics and highlights the problem with films that are made by the numbers. This film is full of tropes: Wrong Side of The Tracks Kid. Snooty Entitled Kid. Persistent Won’t Give Up Teacher. Failed Talent Turned Teacher… But they bump and grind without being resolved into a cohesive whole. Simply putting a series of tired clichés in chronological order does not a story make. An algorithm could come up with this, making some feckless aggregate of Sister Act, Harry Potter and Whiplash.

The only thing that could save it then is a series of convincing individual performances. First up is hardnosed Stet played by newcomer Garrett Wareing. Garrett is easily identifiable as the teen idol surrounded by a gaggle of moppish hair, inhalers and askew spectacles. His character’s rage however is utterly impalpable, he’s a doll that looks cross when his cord is pulled. On the occasions where Stet is called upon to sing, he does so without hesitation. There’s no squirming, no nerves. The kid just lets rip. Bam. Song time. He’s fairly nice actually, although imperious Song Man Dustin Hoffman knows better and calls him a punk kid. He’s got the gift, sure, but where’s the discipline? This was after Stet had learned from scratch how to harmonise, read music and become a competitive soloist in the best school in the country – in roughly three to four months. The lazy little scamp. The trouble is that he should be a punk kid. The brief was very clear on that. But he’s not, he’s just lovely and no one remembered to customize Hoffman’s lines to suit the actual story that was gamely trying to emerge. The Bad Boy is solid. The Tough Teacher is solid. Why tinker with a good thing?

‘Sing from the diaphragm,’ urges Hoffman, he wants his boys to really put themselves into the performance. These needn’t just be dead words after all, invest them with meaning and they will come to life! Quite. There are enjoyable moments in this film, the set choir pieces are unquestionably impressive and there are good performances from slippery Izzard and hard-up school administrator Kathy Bates who do their best to lend a human voice to an otherwise uninspiring assembly.

Boychoir is in cinemas from July 10th.