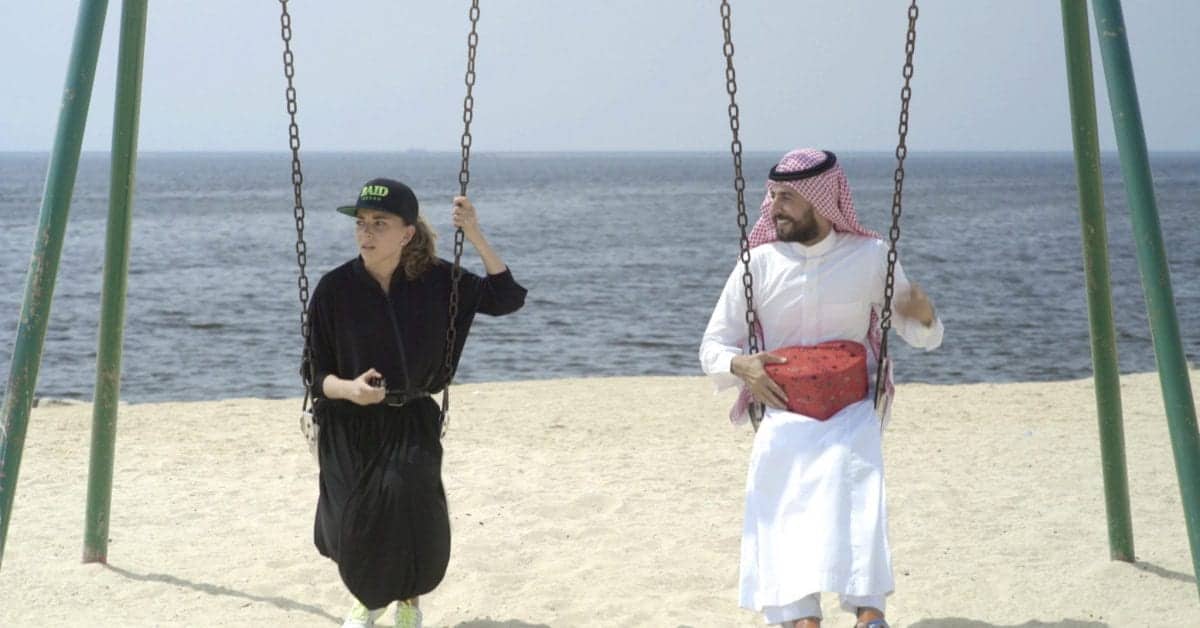 It’s not often that a film from Saudi Arabia hits the screens over here, in fact, this is the first ever film from Saudi Arabia to play at the Berlinale. No wonder, as there are no cinemas and watching films is considered a sin, there isn’t much of a film industry. All the bigger was the surprise when Barakah meets Barakah turned out to be a romantic comedy – not the genre you’d expect.

“I didn’t set out to make a romantic comedy, I didn’t think of a genre”, director Mahmoud Sabbagh says at the Q&A after the premiere. “But of course you borrow from films you’ve seen, and I did want to use humour. I wanted to make a film about public space, but who wants to watch a film about public space? So I included a love story.” The audience is visibly and audibly delighted at how funny Barakah meets Barakah is, how lightly it makes fun of the absurd situation young people in Saudi Arabia find themselves in.

Barakah works as a law enforcement officer for the municipality – telling vegetable sellers and coffee shops to remove their produce or tables from the pavement, checking people’s permits to use public space for events such as a photoshoot. It’s just a job to him, he’s a nice guy and he lets people get away lightly, but only slowly does he start to question the unilateral ban on using public space. His critical thinking is expedited when he meets Bibi, the adopted daughter of a fashion designer and something of an Instagram celebrity. There is an instant chemistry, but it proves very difficult for them to even meet for a first date because of all the restrictions, especially affecting women.

For all its gags and goofiness, criticism of the male-female segregation and the regulation of public life is strong and explicit. And social media plays a big role. Since people are not allowed to express themselves outside of their house, many live in a parallel world through their phones. But it doesn’t replace human contact. When Barakah, a guy in his twenties, says he has never kissed or even touched a girl in his life, or when Bibi has to run out of an art exhibition opening because the religious police have turned up and women are not allowed to be there, it’s disheartening.

Despite keeping a physical distance throughout most of the film, the chemistry between the two leads is convincing. Barakah is played by comedian Hisham Fageeh, whose satirical Bob Marley re-interpretation about the driving ban for Saudi women “No Woman No Drive” went viral world-wide in 2013. As for his co-star Fatima Al Banawi, although she plays a spoilt rich girl obsessed with her video blog and her Instagram presence, her intelligence and clear-sightedness shine through and complements the film’s silliness with layers of depth.

Sabbagh hopes to show the film widely in Saudi-Arabia, and not only via video on demand, which is the usual, clandestine, way films are watched. He and both actors see themselves as activists as well as artists, wanting to bring about concrete change. And Barakah meets Barakah is of a quality that makes it well worth a watch for the rest of the world too: Not only does it provide an insight into an enclosed society, but it is also a very enjoyable entertaining film.