The 1993 murder of James Bulger was shocking both in its brutality and in that its perpetrators were just ten years old. It seemed that both the public and the press were at a loss to understand how it happened, how two children ended up committing such a violent murder. When something like this happens […] 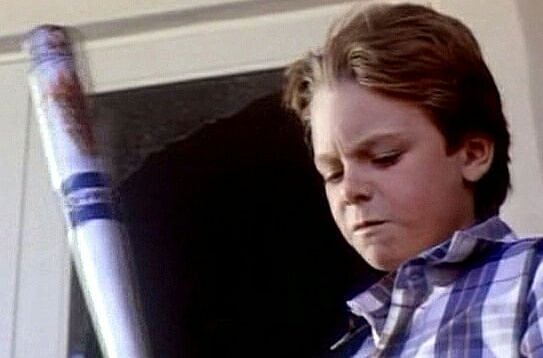 The 1993 murder of James Bulger was shocking both in its brutality and in that its perpetrators were just ten years old. It seemed that both the public and the press were at a loss to understand how it happened, how two children ended up committing such a violent murder. When something like this happens there is, I think, a need to find something to blame, to find a problem that will explain the event away and allow us to have both an explanation and something to fix. In this case (and in the equally disturbing and even more violent murder of Suzanne Capper), the press found their target in Child’s Play 3. Though it was dismissed at trial as a causal influence, and it has never been established whether Bulger’s killers even saw the film, Child’s Play 3 is forever linked with the Bulger murder, as is the moral panic around violent videos that followed.

Just a decade after the uproar over the video nasties, the mere implication that Child’s Play 3 may have been seen by Bulger’s killers kicked off another row in the press, with the right wing falling over themselves to call for violent videos to be banned. “BURN YOUR VIDEO NASTY”, demanded one especially chilling headline. Amendments were suggested to the Video Recordings Act that would have, in effect, banned any content not suitable for children from being supplied for home viewing. This, clearly, went too far, but the rules were tightened in 1994 and there were many repercussions of the controversy seen in UK video censorship in the mid 90s.

Mikey is a slasher film in which a nine year old boy (Brian Bonsall) murders his adopted family and other people around him. The initial process of getting a certificate for the film seemed to go fairly smoothly. It got an 18 uncut in late 1992, the certificate was issued to the filmmakers, Mikey was ready to go. Then the Bulger murder happened, and the Daily Mail noticed Mikey and pointed out its parallels to the case (which are only the age of the killer, nothing in the film otherwise echoes any aspect of the crime). In an all but unprecedented move, BBFC director James Ferman demanded the return of Mikey‘s certificate. There was a long delay between this and the final, official, 1996 rejection of Mikey. In this time it’s likely that BBFC (as they have done in a handful of other cases) asked for input on the film from child psychologists and other professionals, and that there were several screenings for seniot members of the board, who would not have been likely to have made the initial decision on the film, but these things are tough to confirm. The end result is, however, the same: Mikey remains banned.

But for the age of its killer, Mikey is a typical slasher. It opens with a traditional pre-credits kill in which Mikey murders his adoptive parents and younger sister, before settling down as Mikey is adopted by the Trentons (John Diehl and Mimi Craven). This isn’t to say that he settles in to his new life without incident. He clearly creeps out the next door neighbours’ son Ben (Whit Hertford), and develops a crush on Ben’s older sister Jessie (Josie Bissett) which soon edges into stalker behaviour. He also cheats at a reward system at school, which begins to prompt his teacher (Hellraiser’s Ashley Laurence) to think all might not be as rosy as it looks with Mikey.

The film Mikey strikes closest to among the slasher subgenre is Joseph Ruben’s minor classic The Stepfather (1987). The film shares its blackly comic deconstruction of the idea of the American nuclear family with The Stepfather, but making the agent of that de(con)struction a child rather than an adult lends it, in concept, an even more disturbing edge, because of our reluctance to process the idea that a child can do these things. Writer Jonathan Glassner provides a generic framework, hitting on many of the expected beats of a slasher, as well as co-opting portions of the investigative side of The Stepfather, with Mikey’s teacher’s attempts to dig up information on his past ecohing Jill Schoelen’s journey in the earlier film. The script has a few weak lines as it tries to Freddy Krueger-ise Mikey (“…there is one thing you never taught me… How to die!”) and there’s nothing wildly original to be found in either the writing or the visuals, but equally neither department is ever less than competent or fun. Indeed, the film does hit on some genuinely creepy imagery, even if just through Mikey’s age recontextualising things we’re used to seeing. In one of the most unsettling recurring images, echoing one infamous scene in Henry: Portrait of a Serial Killer, we often find Mikey watching his own murders (which he calls “Mikey’s funniest home videos”), indeed voyeurism is an uncomfortable theme throughout, with Mikey spying on Jessie and her boyfriend and walking in on his mother when she’s taking a bath.

The cast works to the film’s great benefit. Mimi Craven and John Diehl do a good job as the solidly decent couple who end up as Mikey’s new parents, as do Ashley Laurence (whose name is misspelled in the credits) as his teacher and Josie Bisset as Jessie, who is at first amused and then increasingly disturbed as it becomes clear that Mikey’s little crush isn’t as innocent as it seems. However, the real star of the film, and the reason it works at all, is Brian Bonsall. He can’t quite sell the cheesier lines, but when it matters he delivers. Bonsall gives a remarkably credible performance as Mikey slips from his mask of being the dream kid for his adoptive parents into his more disturbing behaviour. He sells the little moments that a bit of the real Mikey slips out – often when he’s with Jessie, in a comment that could be read either as frightening or simply as a kid trying to express something he doesn’t quite have the language for yet. In a lot of ways it’s a performance much like Terry O’Quinn’s in The Stepfather, not quite as accomplished, but equally a standout in the film.

I wouldn’t go as far as to call Mikey a lost classic, but it’s a very well made and rather fun slasher. It may depart from formula only in the age of its killer, but it executes the generic beats very well. It’s a shame that it seems to have disappeared from the landscape, with only a fullscreen German DVD release. It seems ripe for a company like Scream Factory or Arrow Video to pick up and bundle with extras exploring the censorship history behind it.

It’s hard to say what BBFC would make of this film today. The context now is very different to that of 1996, the board is generally much less restrictive and The Good Son, another film that had similar problems to Mikey, has been available uncut since the early 2000s. The theme is certainly much more troubling than the content, at least in terms of the relatively mild violence. The scene with Mimi Craven in the bathtub might suffer some cuts, due to the fact we see her naked in the same frame as Bonsall, but otherwise I can’t imagine this having trouble getting an 18 certificate, or creating much controversy if it did.

Billie Morgan PR & communications officer for the BBFC said: “The BBFC is always willing to explain individual classification decisions, as well as its policies and processes. A full account of the classification of ‘Mikey’ can be found in the BBFC‘s centenary book, ‘Behind the Scenes at the BBFC‘ (BFI/Palgrave Macmillan, 2012). Where a classification decision is more than twenty years old researchers and journalists can make an appointment to visit the BBFC and read any files on that film, including our file on Mikey. We also have a considerable number of case studies available on the BBFC website, www.bbfc.co.uk. “