I wonder whether, without the striking poster image, its lurid tagline “This woman has just cut, chopped, broken and burned five men beyond recognition… But no jury in America would convict her!” and with writer/director Meir Zarchi’s preferred title, Day Of The Woman enough people would have taken note of this film for us still […] 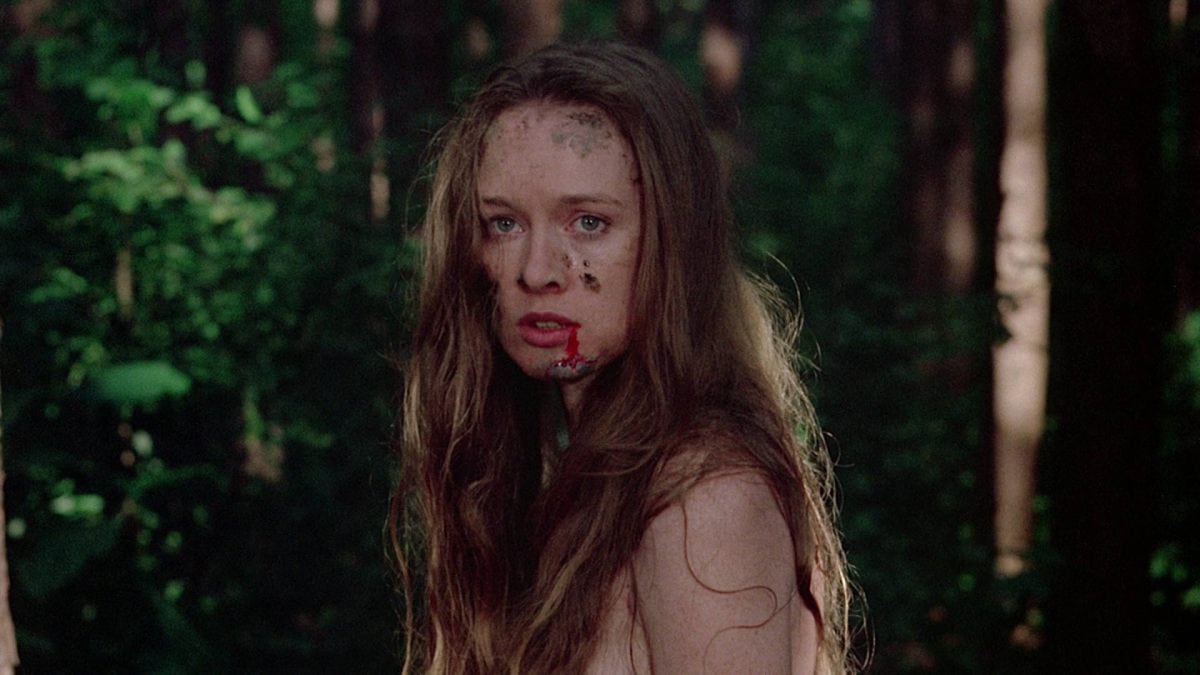 I wonder whether, without the striking poster image, its lurid tagline “This woman has just cut, chopped, broken and burned five men beyond recognition… But no jury in America would convict her!” and with writer/director Meir Zarchi’s preferred title, Day Of The Woman enough people would have taken note of this film for us still to be talking about it forty years on. Titles matter, and the phrase I Spit On Your Grave has such a visceral charge that it can’t help but make an impression, whether it repels you or send the film to the top of your to see , it’s not a title you’ll forget in a hurry.

I Spit On Your Grave was released in the UK in January 1982 by Wizard Video (later relabelled Astra, Wizard’s UK distributors). It was completely uncut. The title alone would have drawn the eye of the people compiling the DPP list, but it’s no surprise that once they saw anything beyond the first act it landed squarely on the list, and remained there through every iteration, making the original VHS highly . Prices vary but can top £100 for the original Astra tape.

Another of the major reasons this film made any sort of impact may have been Roger Ebert’s scathing 1978 review (his co-presenter Gene Siskel also hated it, but Ebert’s written review finds him disgusted and enraged by the film). I, having written criticism for twenty years, know that when I hand a total drubbing to a film much of the feedback ends up being ‘well, now I have to see it’, and I suspect this effect happened here thanks to Ebert’s words. Ebert calls I Spit On Your Grave “a vile bag of garbage” and says it is “without a shred of artistic distinction”. The first point is an opinion. On the second I think Ebert is simply, demonstrably, wrong.

I Spit On Your Grave was, Meir Zarchi says, prompted by a experience. One day he was driving with his daughter and a friend when they saw a woman, bloodied and naked, crawl out of the bushes. It turned out that she had been raped and beaten. On taking her to the Police station, Zarchi was apparently appalled by the lack of sympathy from officers who insisted on questioning the woman immediately, even though her jaw was broken. I think it’s important to understand this context to see where Zarchi is coming from with this film.

With most of them now past or approaching their 40th birthdays, many of the films on the DPP list look quaint now. It’s hard to believe anyone was shocked by Don’t Go In The Woods… Alone or The Funhouse. I Spit On Your Grave is not one of those films. It hasn’t lost an ounce of its power, it remains one of the list’s most shocking, appalling and disturbing films. It’s also one of the best.

The story of I On Your Grave is skeletal. Jennifer Hills (Camille Keaton) is writing a novel and so that she can focus on it she has rented an isolated cabin by a river. When she arrives she catches the eye of Matthew (Richard Pace), the mentally handicapped local delivery man, who tells his friends about her. After spotting her sunbathing out in a boat, the men grab Jennifer, take her out to the woods and repeatedly sexually assault her. A few weeks later, somewhat recovered, she sets out to take revenge.

On its face, I Spit On Your Grave is very basic stylistically. However, Zarchi’s choices are much more purposeful and effective than they are often given credit for. Early on he establishes a sense of the isolated nature of the place Jennifer has rented, but he also suggests the voyeurism not only of the people around her but of us as an audience. Look at how the camera first watches from behind a bush, then from the opposite side of a river as Jennifer skinny dips when she first arrives at the house, already Zarchi’s implicating us. The use of sound is artful in its restraint. There is no score, and while there is some music used, to a similar purpose as score, it is all diegetic. This means practically the entire film unfolds in an eerie silence punctured, from roughly the 20 minute mark, largely by screaming. It might seem artless, but even if it’s accidental what Zarchi does here serves to focus us entirely on the world of the film, he strips us of the usual veneer of being removed from what’s unfolding on screen.

This peeling back of the layers of distance is most effective in the film’s astonishingly brutal second act. All told, though there are moments between them, the film’s three rape sequences take up about 25 minutes of screen time. As well as being difficult to endure simply for their length, it is the grubby extremity of these sequences that makes them incredibly hard to watch. Zarchi forces us into dwelling in these moments with Jennifer, the men’s faces often leering straight into camera, but by having at least two of the men always there as a whooping crowd, cheering on whoever’s go it is, and all three of the others consistently goading Matthew to take his turn, it feels as though the film, intentionally or otherwise, is asking us why we’re still sitting with those men, watching with them. In between these sequences, we have brief moments of a dazed Jennifer wandering naked and battered through the woods. The film is never more terrifying than when, having got away after the first rape, she follows harmonica music into a clearing, only to find the men there, ready to attack again.

Another way in which I Spit On Your Grave is fairly basic is in its characterisation, but again, there is perhaps more to it than is seen at first glance. The men are only loosely established and only the learning disabled Matthew and the ringleader Johnny (Eron Tabor) get any sort of expanded characterisation. While Richard Pace’s performance as Matthew is broad his characteristics; quick to read too much in when Jennifer says they can be friends, easily led and easily scared, aren’t wildly off the mark. The group dynamic is well established, with Johnny clearly the one everyone else looks to, but all three of the men acting to goad Matthew to act. Eron Tabor gives the best performance among the men. He’s particularly effective when the four sit discussing why, after two weeks, Jennifer hasn’t been found and when trying to justify himself, wheeling out the same ‘she was asking for it’ arguments that, sadly, we still hear too often today, when confronted by a vengeful Jennifer. We also see – briefly and from a distance – Johnny with his wife and kids. Again, standing back is a great choice from Zarchi, making clear that this scene isn’t there for us to feel sympathy for Johnny. Jennifer’s characterisation isn’t massively detailed, we’re only told that she’s a writer, but it’s clear that her story is autobiographical so that fills in a few details.

However loose the may be, Camille Keaton is excellent in the film. The rape scenes are so extreme that one has to wonder how much she needed to act, but she communicates a great deal silently in that pivotal moment in the clearing. She’s just as effective in the third act, as Keaton allows us to see the wheels of Jennifer’s mind turning. This is particularly clear when she clearly decides, as he begs, to concoct a more fitting death for Johnny. In this passage of the Jennifer uses her body to lure the men, and she’s equally effective when she’s drawing them in as when she’s ruthlessly using the fact she has them off guard.

I think in the final analysis, I Spit On Your Grave finds not the sort of glee we often see in vengeance movies but, at best, the hope for catharsis. Jennifer seems to relish some of her revenge, but the final act is one not of poetic justice but the need to finish something, to metaphorically close the book on it. Again, I’d contend that it’s more complex and more interesting than it is often credited for.

After I Spit On Your Grave, Camille Keaton and Meir Zarchi got married – they were only together until 1982 but be fair, it’s a hell of a ‘how did you meet?’ story. Zarchi made only one more film, the astoundingly inept Don’t Mess With My Sister, but, he has recently stepped back behind the camera, with Keaton in front of it, for I Spit On Your Grave: Deja Vu, which is in now.

The original film has had a long and enduring troubles with the BBFC. In 2001, as BBFC began to and the video nasties finally began to emerge on video, I Spit On Your Grave was submitted and passed, with seven minutes and two of cuts. An article on the BBFC’s site says that the board concerned by the film’s ‘eroticised depictions of rape’. I find this baffling. I Spit On Your Grave is many things but erotic (or eroticised) isn’t one of them. The rape scenes (which were the only elements cut) all brutality and Jennifer’s suffering and by the time they end she is so bloodied and bruised that she barely looks like herself anymore. It’s not and was clearly never intended to be. The film was re-examined in 2010, at which time some cuts were restored, though the running time was covered with substitutions so the disc could include two commentary tracks. This has the effect of repeating the shots of leering directly into so frequently that it’s almost comical. This is the version of the film now available in the UK, with 2 minutes and 54 seconds of footage still missing. I wouldn’t anticipate an uncut release any time soon.

I Spit On Your Grave clearly isn’t for everyone, it’s a punishingly brutal and difficult film that consistently puts its audience in an uncomfortable position and is all the more effective for its apparent lack of sophistication, which makes it feel more observed than choreographed (compare it to the glossier but far less impactful remake). I wouldn’t blame anyone for hating this film, but I think even if you do, you’d be hard pushed to deny either its effectiveness or its status as one of the key American horror films of the seventies.