The video nasties list isn’t jam packed with classics (though it features a fair few), but what it is, by accident rather than design, is a list of truly singular films. For better or worse, almost every film on the nasties list is an original, something born of passionate people scraping together the resources to […] 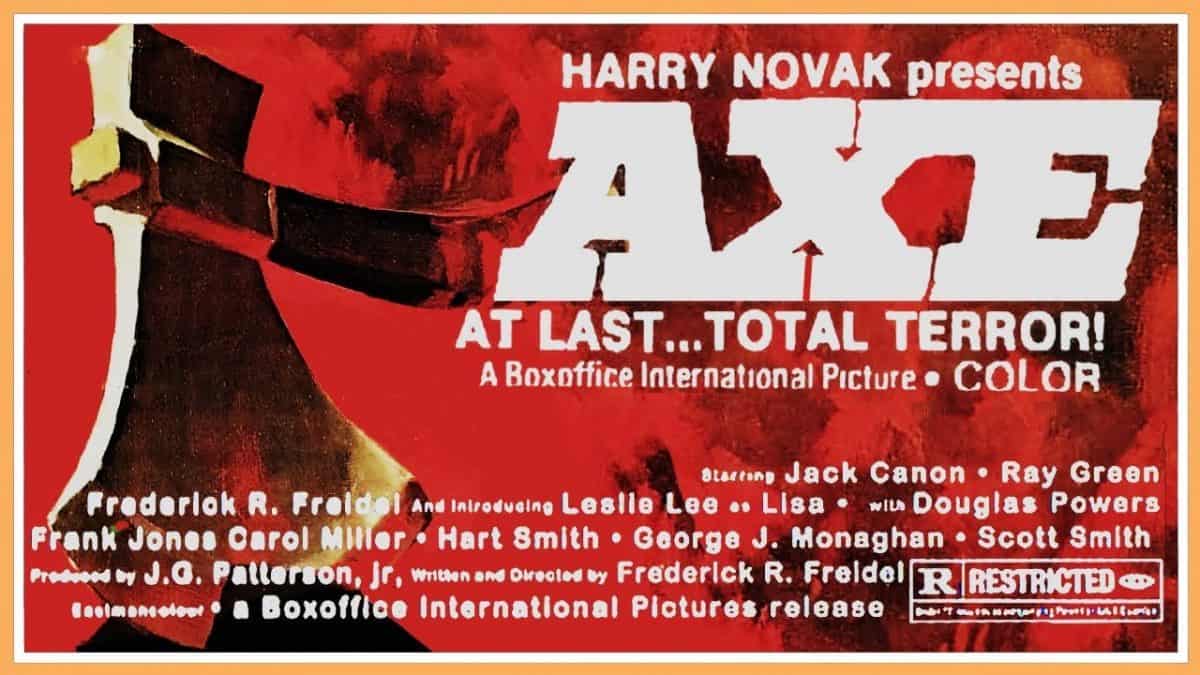 The video nasties list isn’t jam packed with classics (though it features a fair few), but what it is, by accident rather than design, is a list of truly singular films. For better or worse, almost every film on the nasties list is an original, something born of passionate people scraping together the resources to make a movie, often falling into the horror genre or relying on gore because they knew that would be something they could use to sell the film and move up the ladder. That’s all definitely true of Frederick R. Friedel, writer and director of Lisa, Lisa, which would later be retitled and subsequently banned as AXE.

Friedel seems to have been one of those kids who grew up dreaming of the movies, and he wanted to make one. More than that, he wanted to start young. Orson Welles made Citizen Kane at 25, so that was when Friedel would make his first film. He was, he says, under no illusion that the eight and a half day shoot, with a crew being paid about ten dollars each a day and shooting on short e of film bought cheaply from Kodak, amounted to making Citizen Kane. I can’t help but admire this spirit in AXE, and in a lot of other nasties that it is detectable in. It’s not always a spirit that results in the world’s best films, but it does often make even bad films interesting and notable. AXE is one of those.

The film begins with three criminals (Jack Canon, Ray Green and Friedel) breaking into an apartment to kill a man we assume is an associate of theirs. Later they rob a convenience store and assault the woman behind the counter. On the run, they pull up to a farmhouse where Lisa (Leslie Lee) lives with her catatonic grandfather (Douglas Powers). They hold Lisa and her grandfather captive, but when one of the gang sexually assaults her, Lisa fights back.

Friedel’s original title; Lisa, Lisa, is much better suited to the film’s slightly off-kilter tone than the much more lurid AXE (or California Axe Massacre, another alternate title that is inaccurate on several points). The first twenty minutes are the film’s most conventional passage and entirely non-coincidentally its dullest. Even at 68 minutes, AXE is brutally stretched to reach feature length, which means that every scene is protracted and meandering. The opening home invasion is by far the worst offender here, we get a little feel for the personalities in the gang: Friedel the young kid in over his head, Green the heavy and Canon the old pro, but waiting for their prey to arrive swiftly becomes boring, as does the lengthy assault on the camera as the attack is rendered largely in POV. The same is true of the entirely superfluous convenience store sequence, which is a long wait for one half-clever visual gag.

We’ve seen Lisa and her grandfather during the first part of the film. In one sequence we watch Lisa pick up a chicken and cut its head off (just off screen) with an axe. Like everything else, this takes a long time, but in these sequences, combined with Leslie Lee’s performance – blank if you want to be cruel, chillingly detached if you’re feeling charitable – the pace takes on a somnambulistic feeling that gives the farmhouse an air of something not being right even before the gang invades. Many things are unclear at the farmhouse: what exactly is wrong with Lisa’s grandfather, why is she so calm in the face of these criminals, why do the eggs in her fridge get broken? Even Lisa’s age is up for debate, Leslie Lee was apparently 23 when the film was made, her age (noted on the UK VHS box as 13) is never stated in the film, but she is made to look much younger, lending an extra level of creepiness to Green’s leering gaze and to the assault scene. Lee’s detachment implies a lot of possibilities about what led to her grandfather’s impairments, but the film is content to allow that to play deep in the background, this can be frustrating, but plays into the general unease of everything in the farmhouse. It’s not quite enough to make this a good film, but it is one whose weird rhythm it’s easy to get sucked in by, and the sting in its tail is impressively twisted and nasty.

In terms of why the film was initially banned, the title might be the biggest clue. AXE, and the bloody font it’s rendered in, has an upfront luridness that Lisa, Lisa (and Friedel’s later Date with a Kidnapper, untouched by the DPP and thus all but unknown) lacks. It might also have been the fault of the other alternate title, California Axe Massacre, and any perceived connection to The Texas Chain Saw Massacre, a film never among the official video nasties, but included on the Section 3 list and which had a storied history at BBFC. The noting of Lisa’s age on the box almost certainly didn’t help either, even though it isn’t reinforced in the film. The film itself is fairly innocuous. What we see is almost always the aftermath of violence, not the infliction of it. The sexual assault, unlike many seen in the nasties, is devoid of nudity and never feels exploitative. The bloodiest scene is the cleanup after Lisa kills the gang member who assaults her. This is a pretty nasty scene, reminiscent of the bathroom scene in I Spit On Your Grave both for the action and the bright, vivid, red of the blood, which looks impressively realistic for a film of this budget.

Even at the height of the nasties panic, I find it difficult to imagine there being enough here for a ban. It’s hard to see the rationale, and yet AXE was one of the successfully prosecuted DPP 39. This was why, when the film was re-released as California Axe Massacre after the BBFC’s post-Ferman liberalisation in 1999, it was cut by 19 seconds. It was apparently agreed that the film no longer required cuts, but legal advice said that given that it had been found obscene, releasing an unaltered version meant it could be liable again. By 2005, that advice was revised and the film was passed totally uncut at 18.

As I’ve said throughout this piece, AXE isn’t one of the best video nasties, but I’d still suggest seeing it if you’re interested in this kind of filmmaking. It has an independent spirit and what feels like a personal vision and drive behind it that rather than excusing its flaws makes them part of why the film is interesting.