Invigorated with a refreshingly ebullient zeal, the films of Edgar Wright have never been known to suppress their influences. His feature debut – A Fistful of Fingers, “the greatest western ever made… in Somerset” – was dedicated to Sergio Leone, amongst others, and delighted in imitating the gritty, sun-scorched design of the Dollars trilogy. Likewise, […] 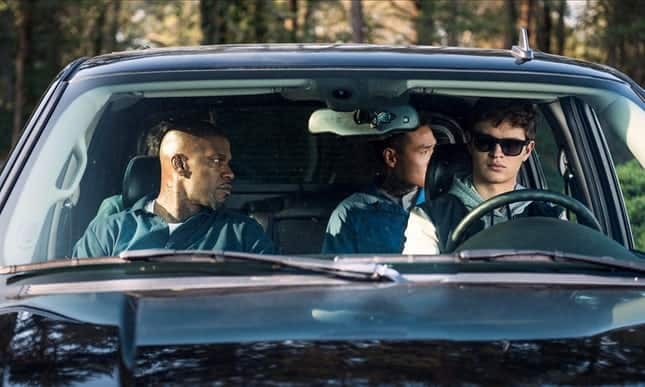 Invigorated with a refreshingly ebullient zeal, the films of Edgar Wright have never been known to suppress their influences. His feature debut – A Fistful of Fingers, “the greatest western ever made… in Somerset” – was dedicated to Sergio Leone, amongst others, and delighted in imitating the gritty, sun-scorched design of the Dollars trilogy. Likewise, his highly lauded Cornetto series – Shaun of the Dead, Hot Fuzz and The World’s End – took great joy in toying with the tropes of the respective genres each individual film was inspired by, and his US debut, the more scattershot but nonetheless satisfying Scott Pilgrim, owed a great debt to the likes of Flash Gordon and Ferris Bueller’s Day Off.

Wright’s latest work – the blissfully boisterous and assuredly brilliant Baby Driver – is very much of a piece with his previous pictures. He’s called it a homage to the “holy trinity” of heist movies: Heat, Point Break and Reservoir Dogs – each one lovingly referenced throughout. However, with a greater poise than perhaps he has ever displayed before, Wright has once again taken a familiar framework, and given it a custom-made refit; injecting this high-octane thriller with a glorious, quasi-musical rhythm.

It’s a film fuelled by both a visual and auditory panache. The ping of the Sony logo at the start triggers a stinging yet subtle high-pitched hum that those who have ever stood too close to a loud speaker for a prolonged period of time will instantly recognise. It’s a sound that has tormented the titular Baby (Ansel Elgort) ever since he was involved in a car accident as a kid that took the lives of his beloved mother and brutish father. Beset, as a result, by an interminable case of tinnitus, Baby now spends his life armed with an assortment of iPods and a set of headphones, the music acting as an antidote that drowns out the relentless ringing.

Baby’s peppy playlist of classic rock & blues also serve a professional purpose. When he was still a yute, Baby boosted a car that belonged to Doc (Kevin Spacey), a local kingpin who saw great talent in this adolescent autoist, and subsequently coerced him into becoming the go-to getaway driver for a number of bank robberies. But now, Baby’s debt has been paid, and he’s looking forward to a blissful future of freedom, perhaps riding along Route 66 with the angelic waitress he’s just met (Lily James). However, having convinced himself that Baby is his lucky charm, Doc has formulated other plans for the boy’s future.

This is the first time since A Fistful of Fingers that Wright has been the sole credited writer of his own film, and there’s something truly exhilarating about the opportunity to revel once more in the singular vision of a filmmaker whose work is always so invigorating. True to the director’s oeuvre, Baby Driver is jam-packed with amusing winks and adoring nods to other cherished works in a way that’s neatly visible, but never obtrusive: Walter Hill’s accomplished no-frills genre classic The Driver is an obvious artistic touchstone, while one of the many pulse-pounding car chases is playfully peppered with references to the Austin Powers series.

The swooning love that blossoms between Baby and Lily James’ Debora though, is True Romance in its purest and most literal form. One could certainly argue that Wright still struggles to properly serve his female characters on the page, but James brings such endearing warmth to the role that you barely notice the script’s flaws; her tenderness providing a perfect contrast to the testosterone-fuelled world of cops and robbers that Baby exists within. It may be the pedal-to-the-metal set pieces that breathlessly power the film’s beating heart, but it’s the affectionately charming chemistry shared between her and Elgort that truly gives Baby Driver its soul – a point beautifully underscored by a date they share in the local Laundromat that’s scored by Beck’s ‘Debra’, and contains a heightened colour scheme that fondly recalls Demy’s Umbrellas of Cherbourg.

Similarly to Ryan Gosling’s unnamed driver in Nicolas Winding Refn’s Drive, Baby emotes much of what he feels silently: Elgort effortlessly holding the lens with a performance that carries a great depth and vulnerability in his eyes, which he slickly compounds with his innately youthful confidence. Louder, more eccentric voices are to be found in the high-calibre supporting cast, with Jamie Foxx, Eiza González, and Jon Hamm all gleefully having a ball playing the psychopathic players in Doc’s crew, while Kevin Spacey subtly steals the limelight from all of them with a commanding elegance as the aforementioned crime boss.

Those who were disappointed to not see Wright’s vision of a big-budget blockbuster with Ant-Man a couple of years back are, perhaps, the ones who will garner the most satisfaction from Baby Driver. With an eclectic soundtrack of artists including Queen, The Damned and The Champs, Wright conducts the chase sequences with a fast and furious fluidity that allows the music to motivate the action with an edgy excitement that rivals the fierce energy of Damien Chazelle’s Whiplash; as a cinematic experience, this manages to emulate that film’s intensity with spectacular verve. From the moment Baby’s foot first hits the pedals of his Subaru Impreza, a potent rush hits you with a strength so forceful it pushes you back in your seat, and practically compels you to scramble about looking for a seatbelt. The tyres screech, the bonnets fly, the chassis flip, and from all this scorching mayhem, Edgar Wright somehow manages to make sweet, sweet music!

Baby Driver is in cinemas from Wednesday 28th June.