The 2018 Award Season is finally over and after all of the vast number of differing ceremonies and awards that have been given out, I have a few thoughts on 2018’s major winners. I could have chosen any number of awards ceremonies, but it seems fitting to take the Academy Awards, Golden Globes and the […]

by Jim Mackney
in Film 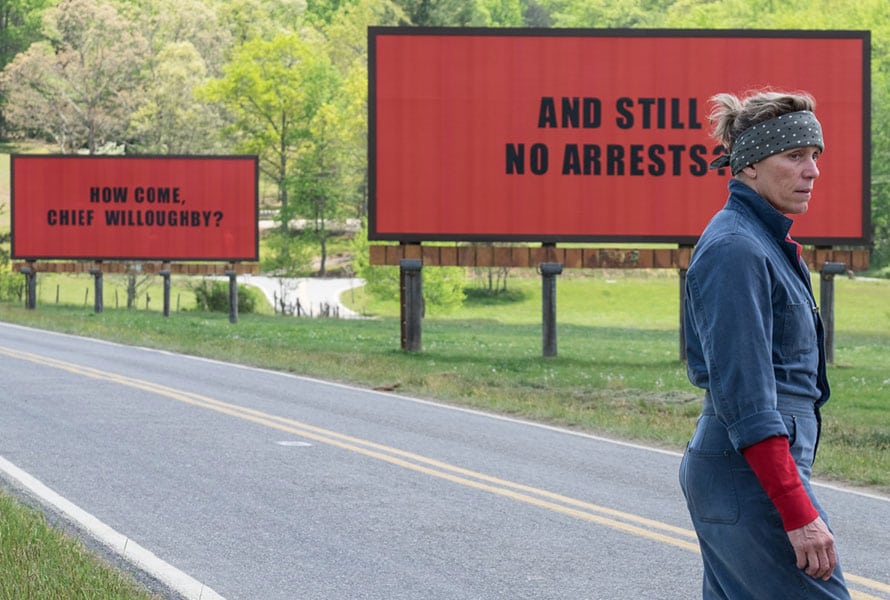 The 2018 Award Season is finally over and after all of the vast number of differing ceremonies and awards that have been given out, I have a few thoughts on 2018’s major winners. I could have chosen any number of awards ceremonies, but it seems fitting to take the Academy Awards, Golden Globes and the BAFTAs into consideration.

One constant through all of the three ceremonies was Coco’s success for Best Animated Film, with Pixar striding comfortably home when pitted against passable rivals such as Boss Baby. Coco is a triumph but perhaps not on the same level as Toy Story or The Incredibles with some rumblings of it not being as good as Inside Out – I was left rather unmoved by Inside Out, I must admit.

The big winner at the BAFTAs this year was Martin McDonagh’s jet black dramedy, Three Billboards Outside Ebbing, Missouri which scooped Best Film and Outstanding British Film. The film evidently struck a chord with BAFTA voters as Frances McDormand and Sam Rockwell also took home the Best Actress and Best Supporting Actor awards respectively. Three Billboards… felt like a firecracker of a film when I saw it back in January and the success it has gone on to achieve has taken me a little by surprise. I thought that perhaps the film would be too dark, too swear-y to gain mainstream awards recognition, not to say I don’t think it is deserving, Three Billboards… is without doubt one of the funniest and moving films I have seen in a long time. Martin McDonagh’s direction keeps on getting better and once again, his script shines bright taking the audience through various twists and turns with a rag-tag bunch of flawed characters. The film doesn’t pull any punches and the ending although slightly ambiguous for some, felt just right. We saw a snapshot of the town and its people and then we left them to it, not quite getting the closure we wanted, as in life.

The biggest surprise from this year’s Academy Awards came in the shape of Best Picture winner, The Shape of Water. I am huge fan of Del Toro’s work and The Shape of Water continues to showcase his ability to blend fantasy and reality with ease, continuing to make audiences care about storylines and characters they would not normally root for. Although is it better than, Get Out? No, it isn’t. Jordan Peele won the Original Screenplay academy award for the Get Out, but he should have also taken home Best Picture and possibly, Best Director. Peele with this debut feature film managed to create a truly original piece of horror cinema that was in turn funny and absolutely terrifying. He directed the film through understanding horror conventions and subverting them to great effect. He garnered a masterful performance from Daniel Kaluuya and even made me like Allison Williams who was able to shed her uptight and wooden performance she often exhibited in Girls. A quick word on Del Toro, his Best Picture award should have come for Pan’s Labyrinth, right?

The Golden Globes was the only awards show to even nominate, let alone award James Franco for his performance in The Disaster Artist. At the beginning of the awards season Franco was everywhere with Tommy Wiseau in tow, seemingly on an unstoppable trail of success but the emergence of harassment allegations stopped the proverbial train dead in its tracks. Seeing as The Disaster Artist was the film that had given Franco some of his credibility back, his career looks to set to veer off the tracks once more or at the very least force him to complete a Hollywood vow of silence for a few months.

Major winners from the Golden Globes included Del Toro again for Best Director but Best Film went to Three Billboards… adding another layer of success for the film. Gary Oldman picked up Best Actor as he later would at the Academy Awards. A safe bet and one that really didn’t mean much. Yes, Oldman is an actor of notable skill but his performance for me was not as good as Brian Cox as Churchill although Cox was in a weaker film overall. Either way, Oldman could have been beaten by Daniel Kaluuya for his fantastic performance in Get Out. To add another layer of inevitability over Oldman’s win, there is a sense that Academy Award winners need to have paid their due as it were, Leonardo Di Caprio being the famous example and sadly for Kaluuya it was Oldman’s time.

Overall, those that were expected to win did and although there were some surprises, this was a rather tame awards season. The Shape of Water and Three Billboards… won big in the prizes that mattered and after Moonlight winning Best Picture last year perhaps it was too much to ask for Get Out to do the same, it is still the Academy Awards after all. We all have our favourites, you know some of mine, let’s hope we all get a bit more of what we want next year!