By Linda Marric @linda_marric In Another Mother’s Son, Jenny Seagrove plays a widow shopkeeper living in Nazi occupied Jersey during World War II. The film is a well meaning piece of historical drama, but sadly for its makers, this messy production is let down by way too much schmaltz and what can only be described […] 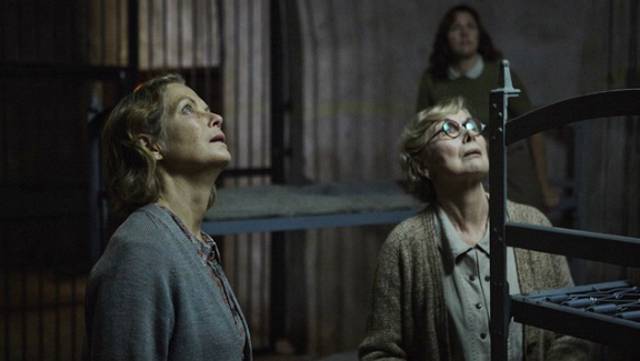 In Another Mother’s Son, Jenny Seagrove plays a widow shopkeeper living in Nazi occupied Jersey during World War II. The film is a well meaning piece of historical drama, but sadly for its makers, this messy production is let down by way too much schmaltz and what can only be described as an overly descriptive narrative.

Seagrove stars as Louisa a defiant woman who risks her own life and that of those nearest and dearest to her, by harbouring escaped Russian prisoner of war Feodor Burrij (Julian Kostov). Mother to two sons, both fighting the nazis on the continent, Louisa takes it upon herself to treat her guest as one of her own by teaching him to speak English and keeping him hidden in plain sight. Soon Feodor starts to feel at home, surrounded by friendly faces and gaining the trust and respect of the neighbourhood. As she enlists the whole family to help keep the secret, Louisa is confronted by postal worker Arthur (John Hannah) who is married to her sister Ivy (Amanda Abingdon). Arthur believes that she is putting all of them in danger by being careless and naive. Kostov is very likeable as the bruised and battered Russian soldier, even when a truly ludicrous plot twist has him needlessly putting himself in danger just to please his pushy host.

Based on the true story of Louisa Gould and adapted from a book by Louisa’s great niece Jenny Lecoat, the film is a tale of hope, compassion and motherly love. Despite its very worthy message and very touching account, the movie falls short of convincing as a period piece. Mostly let down by a flimsy dialogue and overly expositional narrative, Another Mother’s Son could also do with being a little shorter. Having said that, Seagrove and the rest of the cast, which also includes singer Ronan Keating, do their very best even if they are ultimately let down by a poorly thought out plot.

On the whole this is hardly a film which will be setting the box office on fire, and for good reason. The story may be an interesting one, but what lets it down in a big way is a bellow par storyline which fails to keep its audience hooked and will have you wishing it would just hurry up and end. Sadly for all involved, this cliché ridden production will frustrate more than impress, but one good thing about it is that it brings to its audience a truly fascinating story of courage and compassion by paying respect to all those who stood up against oppression during those dark times.

Another Mother’s Son is on general release on the 24th March.