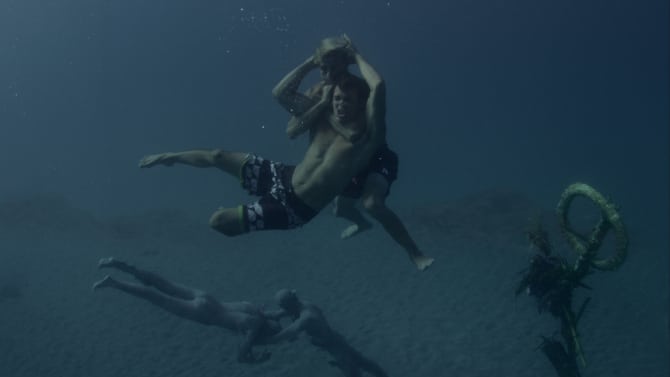 Produced by Hollywood’s own “enfant terrible” of cinema Shia LaBeouf, LoveTrue is the highly anticipated second non-fiction feature by Bombay Beach director Alma Har’el. Israeli born Har’el, whose roots lie first and foremost in music videos and art installations, explores the broad idea of human love using an atmospheric mixture of present footage as well as imagined pasts and futures. The film is also a poetic piece which uses artful camerawork and reenacted sequences to tell touching stories of love, loss and regret.

Har’el tells the story of three unrelated dysfunctional relationships, unfolding in different corners of America. Alaskan Blake is a young stripper with big dreams and an even bigger heart. She loves her job and feels empowered by it, but her initial optimism is soon replaced by strong feelings of insecurity in a job she can only do for so long. Blake’s undying love for her boyfriend Joel, a mild-mannered college boy with a debilitating illness, is put to the test when she decides to live full time in the strip club where she works. Will is a young stoner-cum-surfer and sometime coconut salesman from Hawaii who is raising a young son from a former relationship alone, despite finding out that he is not the child’s biological father. Will maintains a close relationship with the boy and refuses to give up his rights as a parent; his love for the child transcends all, despite being hurt by the breakup. Then there’s Victoria, a New York City singer songwriter, caught between the love of her estranged mother and her philandering, sometimes violent father. Victoria’s love for both parents and the sense of duty towards her younger siblings is recounted through sequences of phone calls, a cappella songs and very touching moments of interactions between her and her siblings.

The film takes us through a non-linear dream-like account of the three stories with subtitles as well as off screen narration. Real life characters depict future characters of the main protagonists, as in the case of Blake, an older stripper, who is earlier asked about her own experiences, is seen wearing a t-shirt that says “Older Blake”. Dramatic recreations are also used in cases where real life characters have categorically refused to be in the film. Victoria’s mother is played by an actress, who is also interviewed as herself in another sequence.

The film’s impressionistic aesthetic showcases the vulnerability of each of the stories and evokes different kinds of love in each case. The hypnotic score by Flying Lotus adds a great amount of dreamy magical realism to a film’s interesting, if at times confusing narrative. LoveTrue is an ambitious undertaking from a courageous director which is far from perfect, but makes up for it by its originality.