Meet Daenerys Marshall, Khalessi Gonzalez and Arya Lippincott - the children whose Game of Thrones-obsessed parents named them after the cult show’s most powerful characters. 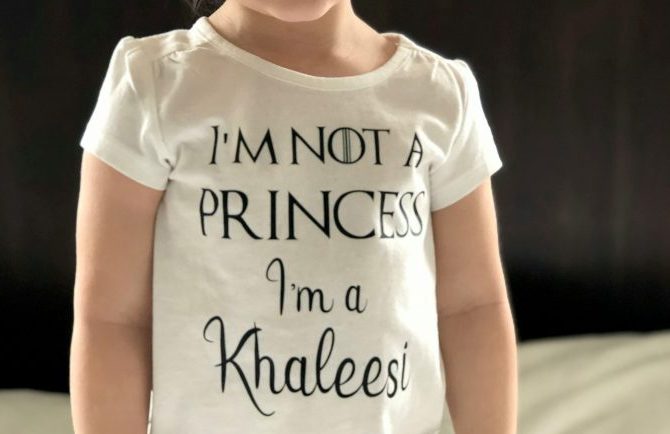 Meet Daenerys Marshall, Khalessi Gonzalez and Arya Lippincott – the children whose Game of Thrones-obsessed parents named them after the cult show’s most powerful characters.

Daenerys, two, Khalessi Sky, five, and Arya, one, are among a growing number of children in North America given names inspired by HBO series’ most recognized faces.

When fans Christine Marshall and her husband Daniel, a sub-contractor, welcomed their third child in April 2017, they knew the name Daenerys was the perfect fit for their daughter.

Christine, 33, and Daniel, 29, of Milton, Ontario, Canada, had been fans of George RR Martin’s novels prior to the show’s 2011 debut and admired the strength embodied by the Mother of Dragons portrayed by British actress Emilia Clarke in the hit show.

The GOT-obsessed couple said they never fretted about what others thought of the unusual moniker and “seriously” considered naming their youngest son after King’s Landing’s Tyrion Lannister at one point.

Christine, a stay-at-home mom, said: “I read the book long before the show came out in 2011 and Daenerys has always been my favorite character.

“She is a bad ass, take no s**t character and I would love for my daughter to embody those qualities.

“When we found out I was expecting a girl, there was absolutely no discussion about what her name would be.

“Our families were shocked. They said people wouldn’t be able to pronounce it or recognize it.

“Because George RR Martin made it up, it wasn’t in any of the baby books.

“If my youngest son Forbes had been a girl we were 100 per cent going to name him Sansa and we even seriously considered Tyrion but in the end we went for a name that’s important to my husband’s family.”

According to statistics released by the United States Social Security Administration, Game of Thrones inspired names have been climbing up the charts since the show’s inception.

The name Arya, the Winterval-born heroine portrayed by British actress Maisie Williams, placed 135th on a list of America’s 1000 most popular girls names in 2017.

In the same year, the name Khaleesi, the Dothraki title given to Daenerys Targaryen in show’s first season, landed 630th on the list.

Miami-based mom Jasmine Estrada, 38, used the title as inspiration when her daughter Khalessi Sky, five, was born in 2013, although she spells and pronounces it differently.

Jasmine, a constituents service manager, said: “My mom was the original fan in our family and she just loved the show.

“I was pregnant and I was struggling to come up with a name for my baby girl and my mom suggested Khaleesi, which was the title Daenerys was given when she married Drogo.

“I started watching the show after that and I became obsessed.

“I love Emilia Clarke’s character and I thought she was always strong and never weak.

“She is always stepping it up.

“When my daughter was born I named her Khalessi, which we spell a little bit differently and pronounce ‘KAL-ESS-EE’ rather than ‘KAL-EEE-SEE’.

“Everyone who is a fan of Game of Thrones recognizes her name and they think it’s cool.”

The name Arya felt like a perfect fit for Marina and Andrew Lippincott’s baby daughter in December 2017.

The self-proclaimed GOT fanatics even celebrated Arya’s impending arrival with a themed baby shower complete with an Iron Throne and dragon-embossed cupcakes.

Software engineer Marina Lippincott, 41, and Andrew, 37, who works in software sales, said their friends thought they were crazy when they told them their daughter’s name.

Marina, of Lumberton, New Jersey, USA, said: “Our whole family is obsessed with Game of Thrones.

“We’re the type of family that throws Game of Thrones parties, we love it so much.

“We dress up and often throw Game of Thrones marathon parties.

“I was doing IVF so I knew almost right away when I was pregnant with my daughter.

“I have known for a long time that if I had a girl I would name her Arya.

“I do think Arya is the best character in the show.

“She is so kick-ass and brave. I loved the name and thought it was so beautiful.

“Some of my friends thought I was crazy naming her after a fantasy character but I really didn’t care.

“My friends got over it though and they threw me a Game of Thrones themed baby shower with dragon cupcakes and my own Iron Throne.”

Mom-of-three Marina believes the name will stand the test of time, even after fans say goodbye to the show on May 19.

Marina said: “I just love the name so much and I think even after the world moves on from Game of Thrones it will always be beautiful to us because the show has given us so much as fans.”

Jennifer Moss, founder of BabyNames.com, predicts that show’s influence on US parents will continue to rise as Game of Thrones moves into its final season.

The US Social Security Administration publishes only the top 1000 most popular boys and girls names each year, but Jennifer reckons Westeros residents including Tyrion, Sansa and Bran, are also influencing American parents.

Jennifer said: “Although the books were published in 1996, Game of Thrones didn’t have an impact on the American baby name statistics until April 2011 when the show debuted on HBO.

“Aria, spelled with an ‘I’ is now 20th on the list, which may also be influenced by the character in Pretty Little Liars, which made the name even more popular.

“Khaleesi is also a popular one, placing 630th on the list in 2017. This could be more popular than Daenerys is, just because its sound and spelling is closer to names we might be familiar with, such as Kal and Callie.

“I think the reason Game of Thrones has had such a strong impact is that it is a show that identifies with both men and women.

“I believe these GOT names will be on trend for a while.

“We are still seeing Twilight influencing the statistics, with Bella, Edward and Jasper still extremely popular.

“The name Hazel from the movie The Fault in Our Stars is still experiencing a surge across the US.”

Jennifer, who co-hosts a podcast called The Baby Name, believes millennials are much braver than previous generations of parents when it comes to naming their kids.

“I think people are braver and more creative when it comes to baby names now,” said Jennifer.

“Fifty years ago, a third of all parents gave their children names on the top ten list and that has changed drastically.

“There is a drive now to choose more unique and creative names and there is a freedom that comes with that.”