“After the show I just wanted the ground to swallow me up. If it wasn’t for my kids I would have ended it. "I am relieved the show has been taken off the air and I hope it never comes back. Mental health is a serious subject and this show exploits the most vulnerable."

by Ben Gelblum
in Media, TV 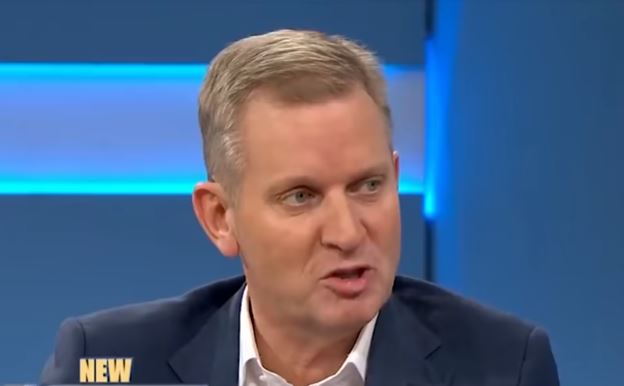 A decorated Gulf War hero suffering from PTSD says he was driven to the brink of suicide after he appeared on the Jeremy Kyle show.

Fergus Kenny, 49, agreed to go on the ITV show after the producers told him he would be reunited with his estranged daughter.

But when he turned up for filming he was branded a “disgrace” by loudmouth host Kyle and was mercilessly booed by the studio audience.

Kenny, who served in numerous conflicts including the Gulf War, Bosnia and Iraq, said he was so distraught after his appearance on the show in 2016 he considered suicide.

The dad, who volunteers for a military charity, has spoken out following the death of Steven Dymond who died ten days after failing a lie-detector test on the show.

Steve Dymond, 63, went on the show to convince fiancée Jane Callaghan he had not been unfaithful, but they split after he failed the test.

Friends feared for Mr Dymond’s welfare as he had been depressed over a series of issues in the weeks before his death which appears to have been an overdose of medication for his arthritis.

Fergus, from Coalville, Leicestershire, said he sank into depression and felt he had been set up by the show for a “character assassination” by a “kangeroo court.”

“If it hadn’t been for my kids I would have killed myself. It was that bad,” explained Fergus.

“I had been led to believe by the producers that it was going to be a reunion show with my daughter but it turned into a kangaroo court.

“I felt like I was having my whole character assassinated and was being made to look like a scumbag. It was a set up.

“After the show ended I felt extremely low. I didn’t know at the time but I was actually suffering from PTSD from my time in the military.

“If I had known then what I know now I would never have agreed to go on the show.

“I’m afraid I’m not surprised someone has died in an apparent suicide. The show makes entertainment out of people’s misery and heartache.

“I had problems and was in a marriage which was not ideal but I certainly didn’t deserve the treatment I got on the show.”

On the show, Fergus met up with his daughter Hayleigh after years apart as he pursued his military career.

He was a corporal in the Queen’s Royal Irish Hussars and served 15 years, including fighting in Iraq in 2006.

He was injured in the conflict and left the military in 2007 after spending 18 months in rehabilitation.

After leaving the Army he got married to Crissy and moved to Tamworth, Staffs., and he lost touch with his children.

He said: “I saw the kids twice in the ten years between finishing in Iraq and going on Jeremy Kyle.

“Once I went on holiday with them to Wales and another I took the twins to the Army v Navy rugby game at Twickenham.

“We had the occasional text message and phone call.”

He was contacted by the show’s producers after Hayleigh agreed to appear for a reunion show.

“Look at your daughter, you have failed her. You don’t deserve you daughter, pal.”

Fergus said: “I didn’t realise what was going on with the show. It was supposed to be a family reunion.

He said ‘you cannot use the Army as an excuse’.

“He did not even consider I might have mental health issues, he just tried to get me into a fight.

“When the show was over I was promised after care but I got nothing.

“I was just put in a room with my daughter and we managed to fix things.

“After the show I just wanted the ground to swallow me up. If it wasn’t for my kids I would have ended it.

“I am relieved the show has been taken off the air and I hope it never comes back. Mental health is a serious subject and this show exploits the most vulnerable.”

Now he volunteers for the charity Once, We Were Soldiers, which helps veterans who become homeless.