The safety curtains part the stage like an eyelid. A spotlight flicks on and a woman, barely recognisable from her face or from her tight bandage wrapped body, stands awkwardly and unevenly, gripping her support frame for all she is worth. A voice (Buffy Davis), like the computerised Siri, takes her through the Virtual Reality […] 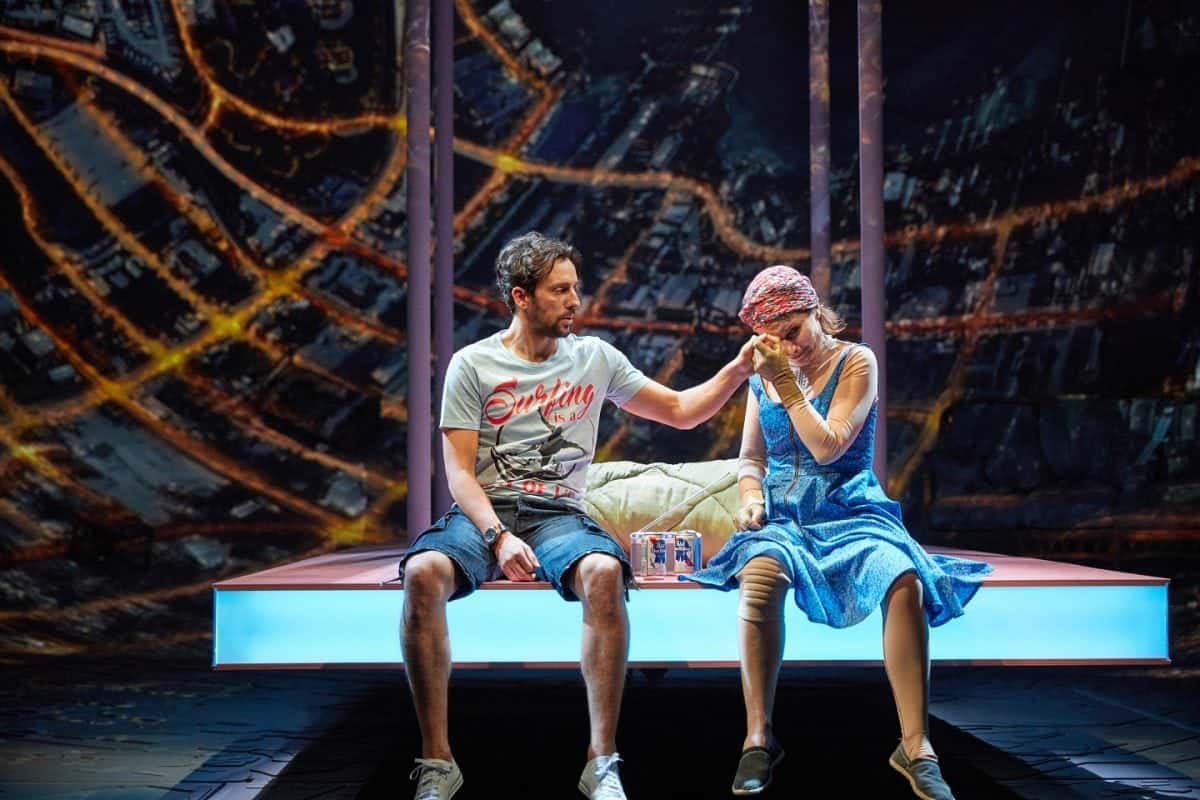 The safety curtains part the stage like an eyelid. A spotlight flicks on and a woman, barely recognisable from her face or from her tight bandage wrapped body, stands awkwardly and unevenly, gripping her support frame for all she is worth.

A voice (Buffy Davis), like the computerised Siri, takes her through the Virtual Reality (VR) world she is about to enter and which may be able to ease the pain from her burns by at least 60%.

This is Jess, who has returned from Afghanistan after volunteering for a third tour. The former soldier, played by Kate Fleetwood, is in a lot of pain. The actress is able to convey this in minute detail so that even the slightest grimace or pursing of lips has us squirming.

But pain, coming to terms with life long disfiguring injuries are not Jess’ only worries. She is back in her old room sharing a house with her sister Kacie (Olivia Darnley) whose boyfriend Kelvin (Kris Marshall) she instantly resents and she is worried her mother (also Buffy Davis and interestingly not listed in the programme), who has a degenerative brain disease, might not recognise her.

Plus Stevie (Ralf Little), now her ex, did not show up at her welcome home party.

We quickly realise that virtual reality is not the only type of reality that thematically concerns playwright’s Lindsey Ferrentiono’s tragicomedy. Imagination- ours and Jess’- is also tested.

This is revealed by the characterisation of both men who act as if they have just walked out of a Bill and Ted movie. Jess finds slacker dude like Kelvin irritating ( it is hard not to see why) but not Stevie, whose personal tics are almost the same. Any moment now we think, the dudes are going to regress into an overuse of superlatives or turn out to be a duo of metal heads.

It is a relief, therefore, when both slip off their goofy masks and reveal who they really are, confounding our expectations of them and, more importantly, Jess’ limited imaginings on the one hand and her over blown fantasies (understandable) on the other.

These plot developments also progress the play’s other thematic concern: using imaginary worlds to help solve real life problems. We see that all worlds are imaginary. Jess’ confused understandings of not just Klevin and Stevie but her belief, unproved, that her mother won’t recognise her not because she can’t, we suspect, but because Jess believes she may not want to.

Maps are everywhere. There are topography maps, VR maps, at one point Florida’s landscape looks like a brain in designer Es Devlin’s clever set and Luke Halls’ gamey video. Jess even asks Stevie to map out her old body with his hands, creating an imaginary landscape of what once was.

This is a clever scene: the dialogue and Stevie’s hands become the virtual mirror which helps Jess re conceive her old self: director Indhu Rubasingham illustrates the point simply, by having Jess and Stevie sit on a roof that is really, in our minds, a swing, which makes it seem as if the characters are swinging in time.

This bit of old school VR is every bit as effective as the computerised VR.

Over all, the whole point is to compare and contrast the permanency and depth of each and everyone’s map and to learn which ones have ended, which ones to ditch and which ones to continue. Tragically, now married Stevie says of himself “My life is going and it would take a braver man than me to break it.”

This is not to ignore the play’s very fact based illustration of the very real use of VR to help those in severe physical or emotional pain. Or to take away the emphasis on how combat affects women and the PTSD that can affect all veterans. But the play is far more than the sum of its parts.

For example, isn’t entering into the computerised VR system, voiced by Buffy Davis who also plays the mother, a little bit like the wish to re enter the womb?