This review contains spoilers Obsession is a work about frustrated sexual expectations and celluloid dreams. It is self-reflexive and caught in the repetitive loop of Luchino Visconti’s 1942 film Ossessione yet feels like a radical comment on our age. Ivo van Hove directs and Simon Stephens gives us an English version translation. This collaboration makes […] 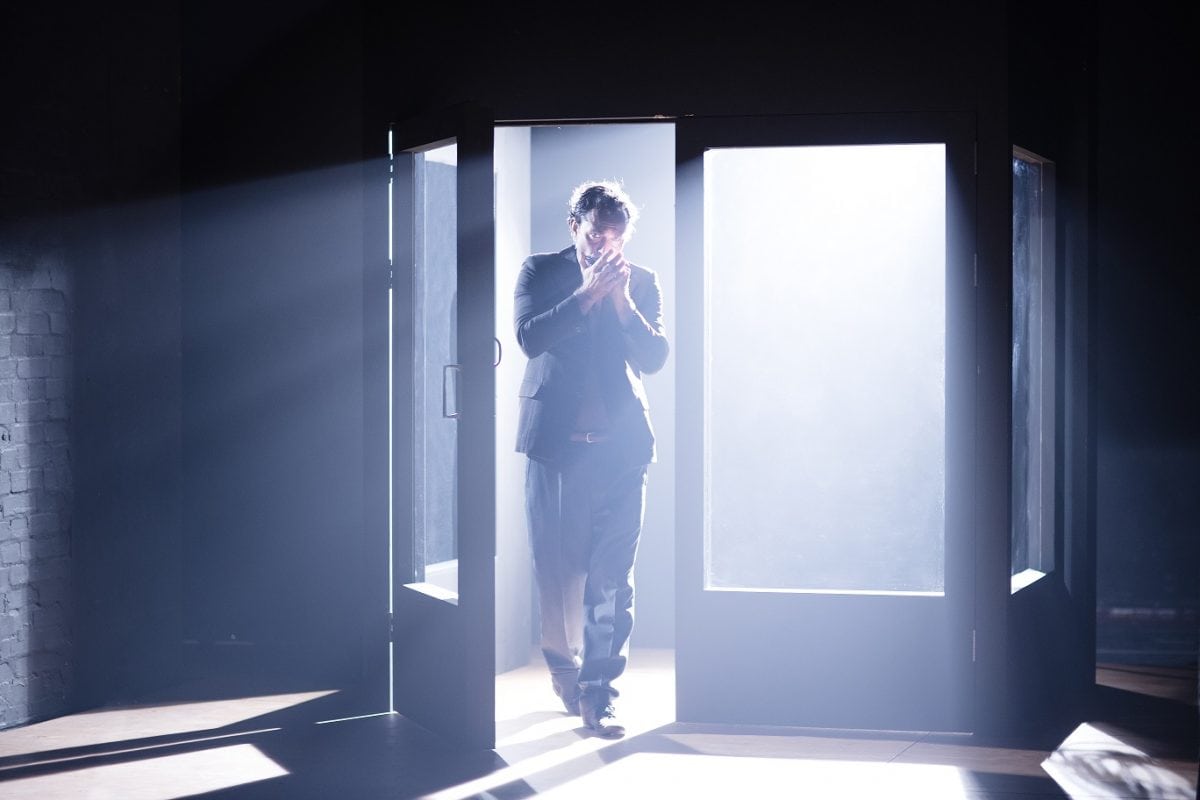 Obsession is a work about frustrated sexual expectations and celluloid dreams. It is self-reflexive and caught in the repetitive loop of Luchino Visconti’s 1942 film Ossessione yet feels like a radical comment on our age. Ivo van Hove directs and Simon Stephens gives us an English version translation.

This collaboration makes sense: previous work from the two, such as Songs from Far Away, brought multiple layers of meaning and theatrical transcendence to  an experimental level. And Stephens, even translating, has a talent for snappy dialogue with a cinematic feel.

Obsession is based on Ossessione, where Gino, an Italian drifter, begins an affair with Giovani (Hanna in this version) wife of tavern owner Giuseppe which ends after a series of murderous tragic events. The film was inspired by crime novel The Postman Always Rings Twice (1934) by American James M. Cain.

Visconti struggled to make Ossessione under the censorship of the Italian Facist government and it was eventually banned by the authorities for its bleak outlook which challenged the vision of the ruling elite – famously Mussolini’s film critic son ran out of a festival shouting “This is not Italy” when it was screened.

The film’s aesthetic- presenting the truth in a social context and with a political commitment to change and on location shooting- means that it is considered by historians to be important to the neorealist movement which was to follow hard on its heels.

It is stripped of any realist tendencies and plays out as if it is an edit without cutaways in Walter Murch’s cutting room: characters move effortlessly between scenes and different locations without us realising. Stephens’ translation gives us sharp dialogue that is delivered almost aggressively by Jude Law as Gino and Halina Reijn as Hanna- the slick pacy dialogue and unnatural acting- actors acting acting- points to a distinctly unreal feeling throughout the production.

It is anti neorealist, anti-melodramatic, Law plays it with the weary kind of expectation that his character has been here before and knows exactly what is to happen: after all his is a universal stock character centuries old.

Gino’s entrance is the stuff of legend. It is remarkable because Law enters like all drifters enter in all neorealist and Indie American films: lonesome, hot, playing a mouth organ and in film noir black and white. Designer Jan Versweyveld develops the conceit by having Law saunter winsomely past a cinemascope like window (if only it were slightly curved) set at the back of the stage.

It is also remarkable because when Law enters through those low hinged glass swing doors for the first time we wonder exactly where we are. Visconti’s action took place mainly in a grotty dark tavern, Cain’s in a roadside diner. Versweyveld manages to give us the impression of both and something else- isn’t Gino entering a movie theatre where, as literally happens, the story of his life will be played out on film?

Hanna and Gijs Scholten van Aschat as Giuseppe live in a strangely minimalist environment which never-the-less remembers the architectural dynamics of the film- Versweyveld has numerous pillars, inspired by those of the tavern, dotted around and behind which actors disappear, as if resting. But the minimalism also enforces the film noir qualities of Ossessione- watch out for Versweyveld’s light casting the water pump tap as a huge contrasty phallic like shadow towering above all.

The minimalism also enhances the sense the actors are playing roles. Food, such a central part of Ossessione, is talked about, but rarely seen apart from the slab of meat Hanna vacantly stabs and jabs. The super where Giuseppe, Hanna and Gino sit down to enjoy a meal, is played standing up with empty plates, van Hove again, as he did with A View From The Bridge, ignoring realistic stage directions to prove how empty the fulfilment of desires is.

The party Gino and Hanna have when they have to carry on business as usual is represented by Hanna throwing around bins of rubbish. Again, everything is empty promises, we are given the effect of something but don’t get to experience the cause. The car, such a capitalist symbol, is strung up naked to its engine like Cornelia Parker’s Brass Band in 2010: stripped to its pulsating mechanical like heart it is a symbol of decayed materialism.

So too is the accordion turned duke box which replaces the visiting music troupe in the film. We are in a world where capitalism, security, stability- desirable things Hanna longs for- has not only not delivered, but won’t and is on repeat. And its funeral march is Verdi’s Requiem, playing softly in the background.

The Requiem isn’t the only death knell. At each of the physical deaths, oil spills out and drowns Giuseppe and later Hanna. They are forcibly baptised: a Catholic reading might say it is God’s Mercy. A harsher reading might see it as a just dessert for impulsive greed and unchecked passions, even that material aspirations are choking us up and drowning us all.

It is probably why van Hove has decided to have the Priest and the justice seeking Detective played by the same actor, Chukwudi Iwuji: the one inflames and encourages desire in a subtle way, the other is the punishing hand of the law, a brief critique on the complexities of Catholicism.

This is a show then which draws heavily on the film’s religious and anti capitalist undertones- Visconti was after all a Marxist.

And Gino can’t get out of the celluloid nightmare. Every time he runs van Hove has him running on a treadmill, going nowhere except into video projections of himself. Yet these projections are not live, they have been filmed in the past like some perverse authority, or ideal held in a film can.

And Gino keeps running into it and the same dream as if there is nowhere else to go- and when he is offered possibility he cannot take it.

The possibility offered here is Johnny, a rather English version of Gino’s drifter friend Lo Spagnolo played by Robert de Hoog. de Hoog plays it like Daniel Day Lewis’ gay skinhead Johnny out of My Beautiful Laundrette (dir Stephen Frears). He is more threatening and dangerous and way less ambiguous than the more innocent Spagnolo and in his boots and rather skin head get up, offers Gino more complex opportunities: a different romance story from the normative.

If Gino did go off with him, we’d be in different film aesthetic territory, we might even start venturing into Chris Goode’s Ponyboy Curtis.

Gino does not of course.

So too with Aysha Kala’s chorus girl Anita. van Hove and Stephens retain the scene where she, holding a bottle of milk, and Gino meet. The milk symbolises the promised land, filmmakers in particular use it as a symbol of innocence and purity, something that Anita is not and which Gino will reject.

And so we come to the final act: the second car crash. In Ossessione, there is a hint, a threat that Gino does this deliberately: he is not quite sure, but probably nearly believes that Giovani/ Hanna did not grass him to the police. Obsession leaves less room for doubt and this changes how we see the ending- with less focus on Hanna and her sense of being trapped in a gender prison, it is no longer fate and the just retribution which comes from that higher force that we are thinking about now.

Rather we are forced to look at the administering hand of that fate, Gino himself, to see how the interpretation has differed for 2017.

until 20th May at the Barbican