Julie is playwright Polly Stenham’s modern day reworking of Strindberg’s naturalistic 1888 play Miss Julie. The original was daring for its emphasis on class and sex wars in an intimate realistic setting, which explains why it is has been such a mainstay in British Theatre’s diet. It is possible to see Stenham’s politically driven version as […]

by Verity Healey
in Entertainment 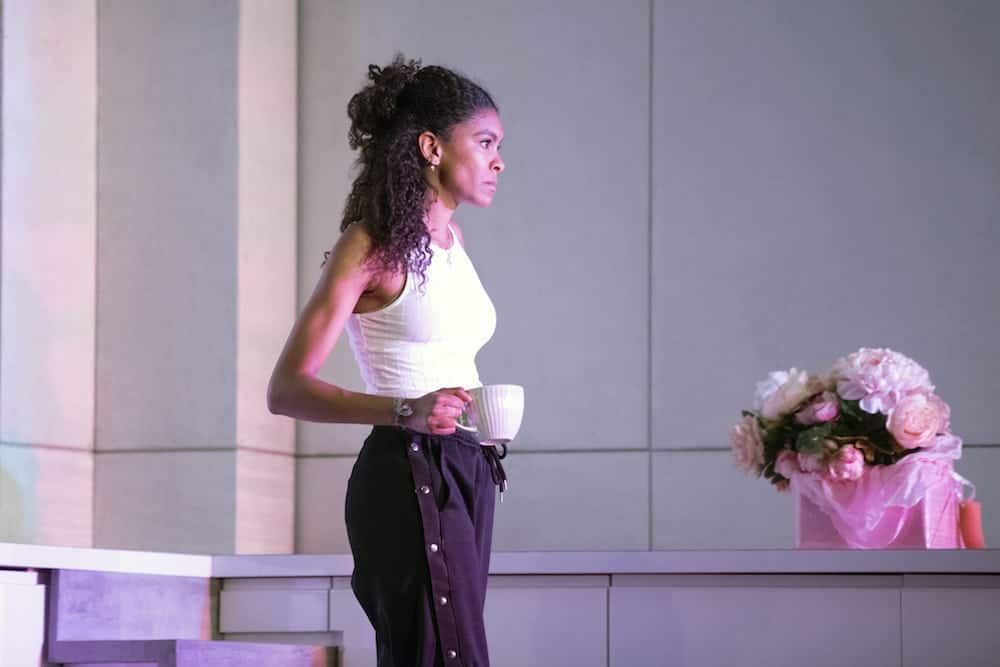 Julie is playwright Polly Stenham’s modern day reworking of Strindberg’s naturalistic 1888 play Miss Julie. The original was daring for its emphasis on class and sex wars in an intimate realistic setting, which explains why it is has been such a mainstay in British Theatre’s diet. It is possible to see Stenham’s politically driven version as being thematically true to Strindberg’s if one wishes- it is still set on midsummer’s eve and there is still outrageous partying going on “upstairs” and Julie (Vanessa Kirby) the super-rich white British thirty something daughter of an absent father, is still as intent on “falling” into the arms of her father’s Ghanaian chauffeur Jean who seems just as intent on transcending his class.

Yet Stenham’s desire to make this relevant to 21stCentury concerns in the UK means that we cannot ignore race and immigration- Eric Kofi Abrefa’s Jean is an immigrant and his lover, Thalissa Teixeira’s Kristina is a Brazilian maid, reminding us that people of colour are a big part of our working classes. And just as this present government is doing its best to so unsubtly make race and immigration as much as an issue as class (and to split the working classes against each other) so Stenham and director Carrie Cracknell are keen to reflect these changes.

Much of the language is a triple-edged sword though, reflecting the complex world we now live in – Jean is as racist and as classist against himself as he is sexist to Julie when he says that she can be “the face” of the restaurant the couple fantasize about running and this trend is a continuum throughout the play.

But to think that this production is solely about the race, sex and gender battle between Julie and Jean would be a mistake. At one point, as they are making love on a ladder (fittingly symbolic) Kirby’s Julie points languidly and briefly at the supposedly watching Kristina, redirecting our focus onto her and her own complex relationship with her “boss”. It is she, and not Jean (who it is traditionally) who touches Julie’s feet and body in post-coital scenes pre-Jean and Julie’s love tryst. Sure, it helps build a small foundation of sisterhood between the two women which never blossoms into what it promises, but it also hints at Kristina’s possible love for Julie which is so cruelly betrayed, and which explains Kristina’s long emotional and fraught journey, which is given new life and meaning in this reworking. 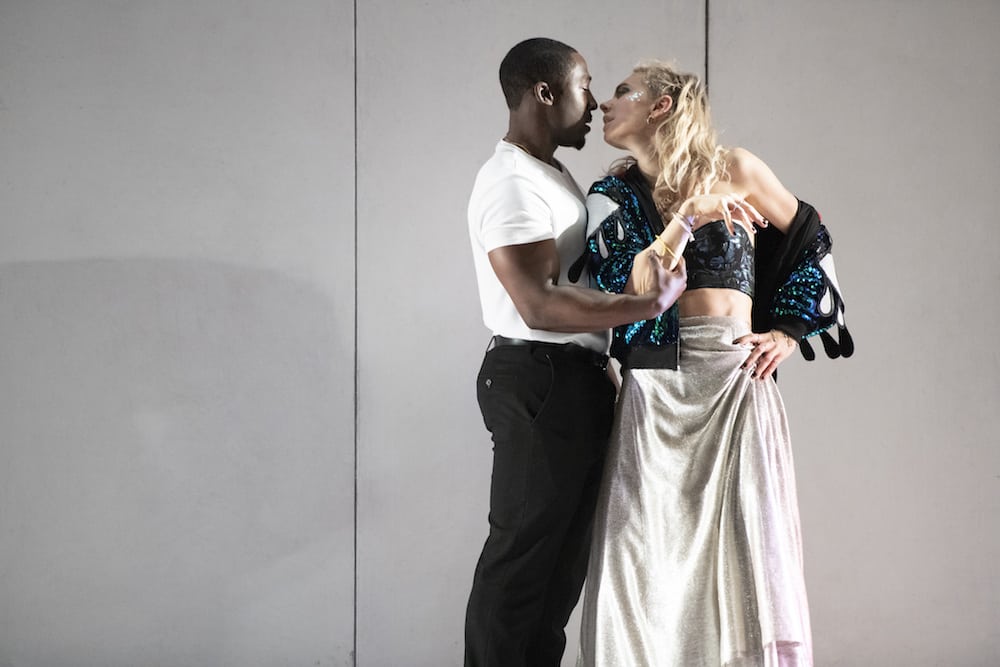 Stenham’s and presumably Cracknell’s original intent is to highlight how liberal probably guardian reading elites (probably much of the audience on press night, who knows) still consciously or unconsciously enslave others(it is not new to tackle the hypocrisy of liberal elites (and of the middle classes) but perhaps there are less plays about it than there should be). But there is also a strong feeling that the creatives are raising two fingers to Strindberg’s own misogyny and sexism. Throughout I was constantly trying to understand why I didn’t quite buy Kirby’s drunk and drugged up upper middle-class Julie (such women are to be seen over and over on our stages) or Kofi Abrefa’s passionless Jean. And why, even though Stenham has made the occasion Julie’s birthday and Jean repeatedly asserts that Julie is a “child adult”, Julie does not come across as wayward or rebellious but rather as being bored with it all-not just with the situation, but with her character.  Even the absent father’s hold, illustrated by a very pink bouquet of flowers, is batted flippantly away by Kirby.

Then half way through Kirby asks lazily but shot through with the sarcasm and subtext which is coming to mark her as a great actress “What is this? What’s going on?” to howls of laughter from the audience and then later “If this was a story, we’d run away”. It’s as if the creatives and actors are saying “Really? Is humanity still at this level that we all have to go through this again?” as well as confirming that this is a classic meta theatre production, where Strindberg’s careful realistic intimacy is smashed, along with his sexism. This can’t be made more apparent when movement director Ann Yee has the party goers disappear into dish washers in a moment that seems to belong more to a Richard Jones show at the Young Vic or when the party itself goes on for too long, without dialogue and we are made aware of theatre’s propensity to create voyeurs out of us all unless we’re careful- another hall mark of a theatre traditionally dominated by male directors perhaps.

Let’s wash all of this 19thCentury crap down the drain seems to be one underlying message throughout this brilliantly written, directed and acted and daring modern play.  Designer Tom Scutt’s set and Guy Hoare’s lighting is morgue-like to accentuate the death of a certain way of writing (as is the ending) and you leave the theatre thinking that patriarchal dominance and its ideas about women and race and class and the stranglehold that some of the world’s more sexist male white classical writers have had over British Theatre has been weakened and that feeling, walking away, could not be more satisfying. All praise to the National Theatre for commissioning such a work.

Until 8th September at the National Theatre