By Georgette Culley BRITAIN’S most notorious former dungeon has opened its halls at night – for life drawing. One of the world’s most famous landmarks The Tower of London has allowed an art group to stage their ‘historical’ drawing classes, which see real life models emulate historical characters in the old stone castle. During the […] 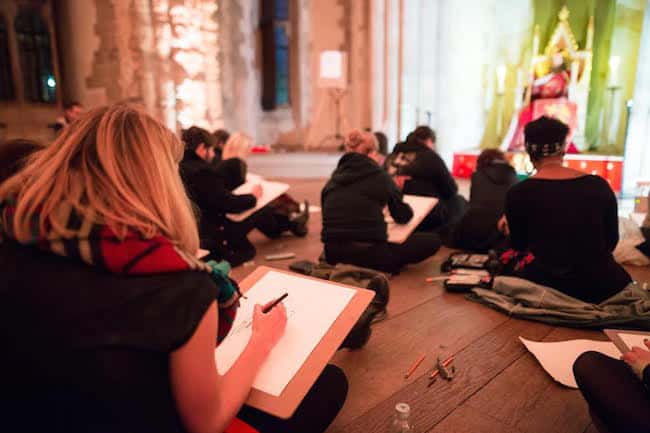 BRITAIN’S most notorious former dungeon has opened its halls at night – for life drawing.
One of the world’s most famous landmarks The Tower of London has allowed an art group to stage their ‘historical’ drawing classes, which see real life models emulate historical characters in the old stone castle.
During the first show, models posed as King Edward I and Queen Isabella – consort of Edward ll – in the draughty halls of Wakefield Tower and St Thomas Tower. Artists were split into two groups; the first group were taken to Wakefield Tower to draw Edward posed with a shield on a gold throne and the second group to the medieval chamber of the St Thomas tower to draw Isabella.
For one sketch, the model portraying Isabella braved the sub-zero temperate and posed nude next to the glorious bed chamber. As Isabella was known as a ‘She Wolf of France’ it was very fitting.

After an hour on each sketch, the groups swapped. Throughout the two hour session artists not only received expert artistic tuition from experts but learnt lots of juicy titbits about the monarchs they were drawing.
To give the event a more authentic feel, the organisers played a mixture of traditional medieval music and contemporary tunes and artists were handed medieval strewing herbs. The new collaboration between Historic Royal Palaces and Art Macabre – who also run Death Drawing classes in London – is inviting adults of all abilities to sharpen their pencils and have a go at drawing in a building once filled with screams.

Art Macabre director Nikki Shaill said: “Our aim is to make the drawing events as unique and different as possible.

“Lots of local Londoners may not have visited the Tower before, assuming it’s just for tourists, but at night our unique sessions allow Londoners to reclaim this local landmark and explore its rich history.

“We’ve teamed up with Historic Royal Palaces to make our events informative, as well as theatrical and artistic.”

Future themes, launching from Monday 15th February 2016 monthly, will include sketching the famous ravens from life, witchcraft and prisoners’ graffiti.

Tickets will cost £25 with all drawing materials and a drink included. For more information, visit their website here http://www.hrp.org.uk/tower-of-london/whats-on/drawn-at-the-tower-with-art-macabre/

Photo credit: Drawn at the tower with Art Macabre