A narrow stage runs 3/4 round the outer edge of the Royal Court’s Theatre Upstairs. It serves as a walkway and platform for its love obsessed characters A, B, Man, Woman and Younger Woman. Merle Hensel’s back walls are painted green, reminiscent of old school blackboards. The characters in the eye-catchingly titled “a profoundly affectionate, […] 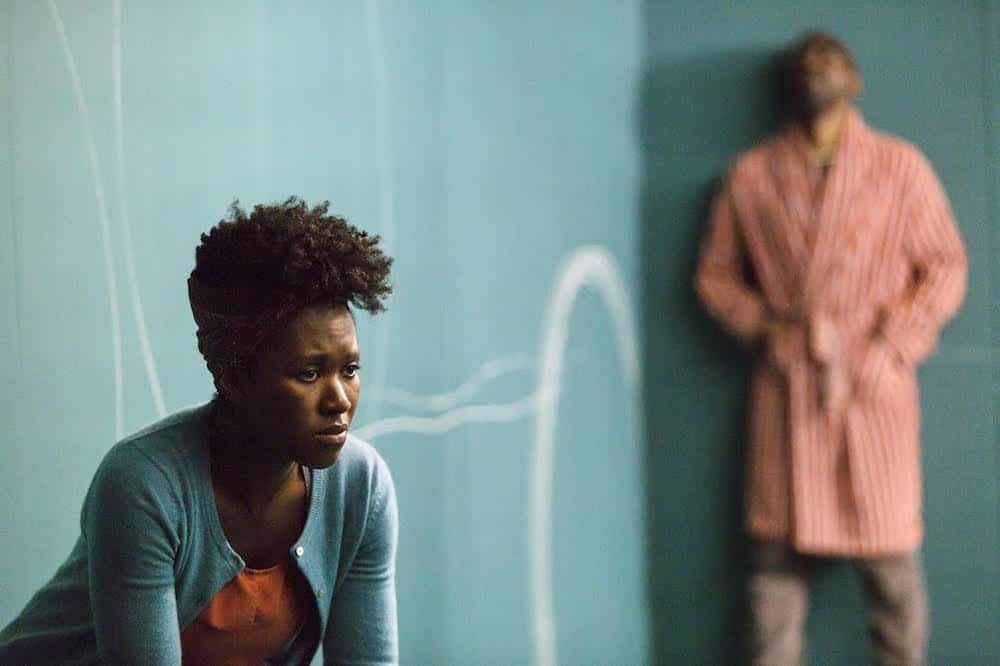 A narrow stage runs 3/4 round the outer edge of the Royal Court’s Theatre Upstairs. It serves as a walkway and platform for its love obsessed characters A, B, Man, Woman and Younger Woman. Merle Hensel’s back walls are painted green, reminiscent of old school blackboards.

The characters in the eye-catchingly titled “a profoundly affectionate, passionate devotion to someone (noun)” draw complete or incomplete circles in chalk, or scratch up “F”s and “F”s back to front. Like school children or high school students we the audience sit demurely on swivel chairs as if about to be given a scientific lecture into the process called falling in love and staying in love.

In order to catch the sharp fire dialogue, the lines shot faster than an arrow from Cupid’s bow across us by A (Lashana Lynch) and B (Gershwyn Eustache Jnr) in part one, we have to tilt one way, then another on our stools as if watching horses careering around a race track.

The characters struggle to define themselves and their feelings for one another through language. Repetition abounds, exposition is on the slim side.

Playwright and director debbie tucker green is not about giving us an easily understood plot or a clear story environment though. Instead, we have to wait and piece together the details of the lives of this couple who live through a tragedy they cannot explain to themselves.

It is exhausting work, looking back and forth.  Our glances dancing between the two characters like a referee at a boxing match are born of real effort: just like love. The effect, by way of heightened elliptical language, is incredibly real and moving.

Part two, featuring a sharp witted Woman (Meera Syal) and a typical laconic Man (Gary Beadle) explores cliche, word play and the use of comedy to lighten real feelings of angst, fear of dependence and an unconscious hatred one can harbour towards those one depends on.

It builds to a climax for the audience and a horrible sense of bathos for the Woman, who, when she shows her soft underbelly, has it stabbed. It’s painful.

The pain is carried over in the guise of arrogance by Gary Beadle’s Man who strikes up a relationship with Younger Woman (Shvorne Marks) the daughter of the first couple in part one. It feels like we have come full circle. Something is being closed we feel.

But what? The daughter is continuing the same arguments used by her mother, Beadle’s Man is coming up against the same questions and problems he faced in part two, though with a younger woman.

As we sit in the gap created by the stage on our swivel chairs we feel the absolute inability of language to communicate our deepest feelings to one another or to impart something adequately enough.

This gap in communication is made physical by the audience  and our realisation of this gap is also a bridge, a bridge that is created by our seeing, acknowledging and understanding that love cannot be explained away, only wordlessly understood.

tucker green has managed to portray a real sense of love’s indefinability. We all feel it by the end of the play, even if we can’t speak about it.