Dance music festival Electric Daisy Carnival (EDC) will return to the UK on Saturday 11 July, 2015 for its third year. Early line-up announcements include the critically acclaimed Art Department, the electro-hip hop  fusing Carnage, Markus Schulz, Visionquest and Jamie Jones. Showing his masterful skills behind the decks, BBC Radio 1’s very own Friction will be mesmerizing Headliners on four decks with […] 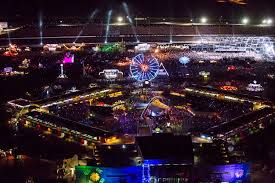 Dance music festival Electric Daisy Carnival (EDC) will return to the UK on Saturday 11 July, 2015 for its third year.

This festival lineup wouldn’t be complete without drum & bass kingpins Pendulum (DJ set) with Verse. Raw and controversial, with momentous killer beats, they are not to be missed. One of the UK’s hottest new talents, Philip George had the biggest breakout record of 2014 with “Wish You Were Mine” and will also be performing. For his latest album project, Cornerstone, Shy FX revisits old-school studio techniques and collaborates with a mouthwatering lineup of special guests.

A legendary venue, Milton Keynes Bowl provides the perfect setting for EDC UK, while the brightest stars in dance music will light up four breathtaking stages/arenas.  DJs will converge from the four corners of the world to celebrate the enduringly popular genre of techno at neonGARDEN ,keeping it deep and dark from dawn to dusk. kineticFIELD presents an exciting mix of big arena electro-house artists, and circuitGROUNDS brings a seminal lineup of drum & bass pioneers who have progressively deconstructed the genre into the cutting-edge sounds and subgenres of today. At cosmicMEADOW a stellar array of favorites has been assembled to transport Headliners straight to the stratosphere.

As a special treat, a limited number of “Early Owl” General Admission passes will be made available for a reduced price while supplies last, and VIP experience passes will also be on sale.

Complete details on the festival experience are available now on www.electricdaisycarnival.co.uk