A continued adherence to outdated doctrine and historic prejudices are, simply put, leading to a loss of faith in the Church, especially among the young generation.

by Keith Ayago
in Literature 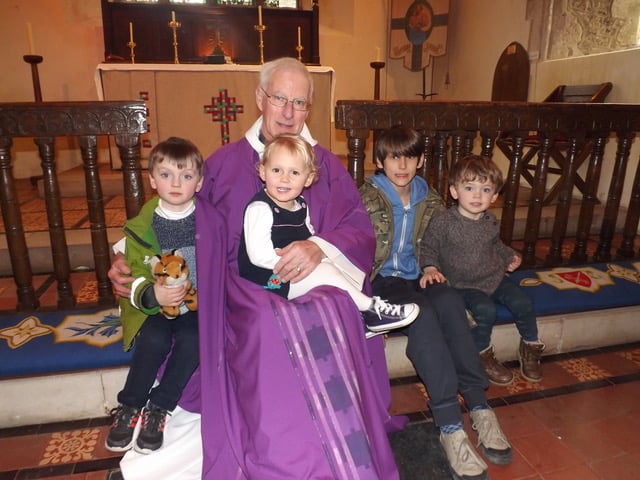 According to progressive Christian theologian and author Reverend David John Keighley, nothing short of a radical reform to theology will prevent the Church of England becoming extinct this century.

For close to 40 years, Reverend David John Keighley dutifully mounted the pulpit each week to share the Christian messages of faith, hope, and charity with the faithful.

And, with each passing year, he became more concerned to see congregations slowly, but steadily, diminishing.

In the 21st century, the Church is facing an existential crisis the likes of which has, arguably, not been seen since the Protestant Reformation of the 16th century.

What Revd Keighley witnessed, with increasing dismay, while a country parson was indicative of a wider, nationwide trend. The number of worshippers who regularly attend church has shrunk by between 15 and 20 per cent since 2009, and is now— according to the Church of England’s Statistics for Mission 2019 report — just above one million.

At the same time, the UK has become increasingly secularised, with the Anglican Church hardest hit. The number of people who describe themselves as affiliated with the CofE has halved since 2002 to 14 per cent. Among young adults aged 18 to 24, that figure is just two per cent, according to the 2018 British Social Attitudes (BSA) survey.

Should this trend continue at its current rate then it is reckoned that Anglicanism will disappear completely from the UK by the early 2030s.

To Revd Keighley, the fundamental reason for this long-term decline is clear: a continued adherence to outdated doctrine and historic prejudices are, simply put, leading to a loss of faith in the Church, especially among the young generation.

By this, he essentially means that biblical stories of miracles, virgin births, talking snakes and the like — when interpreted as literally true, as is still the preference within Church teachings — clash with today’s scientifically-literate laity.

By the same token, the idea of God as some kindly, bearded patriarch sitting on high in Heaven, while the Devil resides below in Hell, is ill-suited to the modern, critical mind.

“Traditional faith is dying,” he said. “Traditional supernatural theism is dead. A belief system that is unbelievable to a scientifically educated population, and is based on ancient, unintelligible creeds and outdated concepts, cannot remain the foundation of Christianity in the changed and developed culture of today.

“The Church, however, seems institutionally unable to absorb the teaching of biblical criticism, the reality of evolution, the false idea of a God ‘up there’, and accept that Christianity must adapt and incorporate these ideas, just as any scientifically-educated twelve-year-old does.”

Keighley, who served as a county parson from 1982 to his retirement in 2017, says that while the Church has embraced superficial changes in the “package” that it presents to the masses, the “product” behind it remains woefully out of date.

This disconnect is further compounded by the Church’s ongoing internal battles with social matters such as gender and sexual orientation.

He said: “The Church of England’s packaging has certainly changed. We now have a modified liturgy, the introduction of new services, catchy new hymns, ‘messy church’ sessions to bring in children, and coffee stations for adults.

“Yet, underneath, the product is still exactly the same. Believers are still expected to believe the unbelievable and suspend rational thought.

“Church congregations are often the worst culprits in refusing change and attempts to do so usually result in clergy giving up and taking the easy way out, or being reported to the bishop.

“At the same time, the Church continues to avoid the social issues of the day. It is still battling with how human beings manage their relationships. Second marriages, female priests and bishops, sex outside marriage, and the LGBTQ community continue to occupy the minds of church authorities as the population at large walks on by without a second glance.

“The Church must reform with a new theology, a new liturgy and an emphasis on accepting, universal love, not judgement, in the community because it’s traditional foundations are crumbling and if it does not change, it will soon become extinct.”

Revd Keighley, 72, says that progressive Christianity offers just such a credible theology fit for the expectations and needs of the present day, as well as a “living faith” for the Church of tomorrow.

As a progressive Christian, he adheres to eight core tenets including the belief that there is “grace in the search for understanding”, and more value in questioning with an open mind and heart than in blindly accepting absolutes or dogma.

Other key beliefs that he says distinguish progressive Christians from the Anglican faith include the affirmation that the teachings of Jesus provides just one of many ways to experience ‘God’, and that progressive Christianity is focused on creating a community that is inclusive of all people, regardless of sexual identity and even if they are “questioning sceptics or agnostics”

Motivated by the crisis with the Church and the ongoing decline of Christianity within British society, Revd Keighley has written Poems, Piety, and Psyche: Progressive Poems for Rebellious Christians.

Composed with a righteous indignation at the “shameful state” of the status quo, this newly-published collection of 130-plus poems expressly challenge outdated teachings and call for urgent reform within the Church, but in an accessible way that the ‘man on the street’ can easily understand and relate to.

In providing a new, progressive Christian theology for the young generations, as explained in Poems, Piety, and Psyche, Revd Keighley’s overarching purpose is squarely on “getting people back on the pews”.

Speaking about the collection, he said: “I wrote the book as a contribution to the shape of the future Church and the theology of progressive Christianity.

“It is an outlet for the anger at the situation we find ourselves in after decades of incompetent governance of the Church and treatment of the clergy.

“It is also meant as a teaching tool for the next generation in its religious education and for the current generation of churchgoers bound to an unbelievable theology.

“My hope is that the message of reform, if listened to, can save the Church before it dies and can point society in a better, more loving, generous and tolerant direction.

“To rescue the Church from the precipice, however, we must demythologise much of Christian theology, challenge the literalism of doctrine and scriptures, and disclose the still valid, hidden truths of Christianity.

“While some Christian theologians may think my verse naïve, the poems are for church believers and those outside the church, who frankly deserve better.”

Poems, Piety, and Psyche: Progressive Poems for Rebellious Christians by Revd David John Keighley is published by Resource Publications and is out now on Amazon, priced £20 in paperback and £7.69 as an eBook. Visit www.davidkeighleywriter.com

Q. If you could nominate one poem from your collection for first-time readers, what would it be and why?

A. ‘Nativity’, which is a good starting point for children (and adults) to be introduced to progressive Christianity. It challenges old and traditional views of a familiar story and makes the reader question its meaning. Much adult ‘unbelievable Christianity’ is based on their experience of primary school nativity plays.

Q. Who are your own inspirations, and why?

A. Don Cupitt, David Jenkins, and Jack Spong are my main inspirations. They all make a vital contribution to the Christian dilemma of our time. They are courageous and passionate about their faith. They have all been mainly ignored and side-lined by the Church. Jack Spong has actually received death threats for challenging the faith.

Q. Why have you used the medium of poetry to share your progressive Christian outlook?

A. As one of my endorsers writes, “A single short poem can sum up an entire theology.” This just about sums it up. I think presenting theological ideas in poetry is different from the traditional book of academic theology. Poems can act as a teaching aid with an immediate effect. Poems sneak under the radar of people who would reject reading about progressive theology. Poetry can conjure up large questions without them being asked. As Professor Marty Percy also says as an endorsement, “Poems are words so twisted and so pressed that they express the matter more densely and subtly than if they were left to their own devices”. My poems represent a creative output from within. Poetry is inspiring; it teaches word economy. Poems ‘show, don’t tell’, and as such poems are powerful.

Q. What has been your proudest achievement to date as an author?

A. Finding a publisher for progressive poetry to bring my work to the UK, and the responses from readers who have felt released from the confines of traditional Christian theology.

Q. What was your first published poem, and how did it come about?

A. ‘Leaving Home’ (2007) was written in response to my studies with Bishop Jack Spong, which inspired me to enter the progressive Christianity arena. It came about when I sent it to Bishop Spong, who published it in his weekly global newsletter instead of one of his comment pieces. It expressed my concern that the current Church held no place for progressive Christians.

Q. How do you go about writing and crafting a poem?

A. Unless I’m suddenly taken with the inspiration for a poem topic (usually at 4.00am) I take a theological subject and address it from a progressive viewpoint, undermining the traditional view usually taken on the subject. The usual process of revision, rewriting, thinking, style, rhyming or free verse, and more revision and rewriting then takes place — at which point the poem is abandoned, like every other creative product.

Q. What challenges did you face in bringing your collection to print?

A. Difficulty in finding a UK publisher of progressive poems. Many progressive books in UK are self-published unless the author holds a prominent academic position. My US publisher, Resource Publications, was suggested to me by another publisher.

Q. What is the secret of writing an engaging and memorable poem?

A. No idea. If there was a ‘secret’ there would be a ‘formula’ and that would kill creativity.

Q. The Bible is noted for its poetic qualities. Which one passage of scripture do you find the most moving, and why?

Life lived in all its fullness is a life lived in relationship with God and others; we were designed to love and be loved.

Q. Now that you have published the collection, what is next for you?

A. Volume Two of my poems, and taking the church and theology into a new future.