By Declan Roberts (@DeclanMR) It’s late November 2015 and it is not the most glamorous of settings for Lyke Byson’s first band interview but Winchester’s cold exterior offers a Christmas vibe like no other. Still, a few drinks should help the band warm up, with Joe Brownen (lead singer), John Hutson (guitarist), Will Coles (guitarist), […] 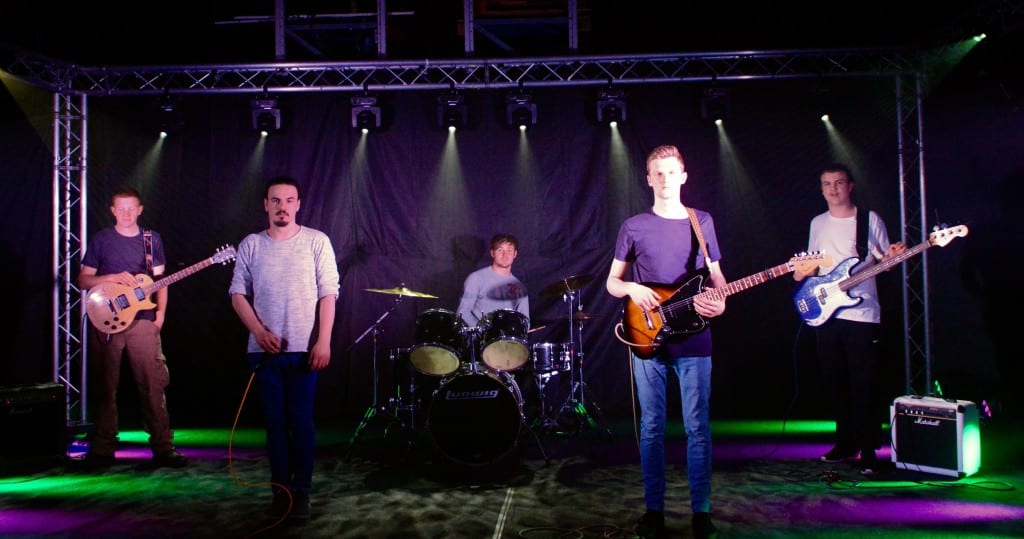 It’s late November 2015 and it is not the most glamorous of settings for Lyke Byson’s first band interview but Winchester’s cold exterior offers a Christmas vibe like no other. Still, a few drinks should help the band warm up, with Joe Brownen (lead singer), John Hutson (guitarist), Will Coles (guitarist), Ben Brownen (bass) and Jack Hayward (drums) working on their beer jackets before we get started.

We start with influences. “I like to think that I get most of my guitar part ideas from Ben Howard’s and Bon Iver’s picking style” notes Will. Joe adds “Lyrically, Eminem’s words inspired a track I wrote, but I wouldn’t say the genre inspires us” which is interesting because I struggle to comprehend the amount of words he ‘spits’. Joe believes that they “put tenderness into a genre that really shouldn’t have it”. Jack sees his heavy metal love of Slipknot and Motorhead as a large part of where his drumming ideas come from. He does consider that the “influence of success by artists is more of an inspiration than a certain genre”.

Jon and Joe are the founders of Lyke Byson, while Will was added to the mix a short time afterwards while the band experimented with other people. They persuaded Ben (yes, he is related to Joe) to play bass guitar which he now relishes. “I mean, they really bugged me to play, but I really enjoy it now,” insists Ben. “I feel a brotherly atmosphere with these guys and Joe is adamant he only wants to ‘play with people he likes’”.

As a live band they are mesmerising. I take time to focus on each member as they crush The Railway (Winchester’s popular music venue) with a very, very loud set. Joe’s vocals are exceptional. He holds the tiny stage with prowess rivalling the likes of Jim Morrison. He cites Elvis as an idol; “He just ruled the stage, even with bad advice from his management, he had such heartbreak in his voice”. They say the best way to overcome pre-gig nerves is to be a barrel of nerves together. Jack chips in with the fact he likes to “show up about 3 minutes late, sink a beer, play then get off”, he reassures me it is a routine that has worked well for him so far. They all loved the gig and are desperate for more. I ask what their dream gigs would be and I thought I’d get the obvious Reading and Glastonbury answers but on the contrary. “I’d love to play the Barrowlands, I always hear from other bands that it is a great place to play,” says Joe. Jack is hopeful he can play his local pub one day, the Badger’s Wood. “I’m being serious, too!”. Joe is setting his sights on BBC Introducing stardom, a realistic goal, given their unique quality of crossover influences that I haven’t heard since Swim Deep and the B-Town scene came about. Joe describes it as “[Ben] Howard’s last album mixed with the Buzzcocks in general”; the combination of chill wave indie folk and heartbroken punk seems to hit the nail on the head. They quickly admit though that they don’t want to be pigeonholed under a certain genre. Jack believes that if you search the songs on iTunes separately then they wouldn’t be in the same genre, “For example, ‘Mt. Florida’ wouldn’t be in the same category as ‘Early Mourning’, they’re just different”. They all agree on pop influences but their crossovers make them a diverse force.

I’m interested to find out what their favourite tracks are. Ben takes no time at all to tell me his, “‘Hate It Or Love It’ by The Game”. What I love about them is the range of tracks I get. Joe continues his Elvis love with his choice of ‘In the Ghetto’. Will is keen on bold guitarists; “I love the way Jack White makes a huge sound out of his guitars, mainly his White Stripe-era,” choosing ‘Blinded by the Light’ by Bruce Springsteen. John chooses ‘Wish You Was Here’ by Pink Floyd which gets a solid approval from the rest of the band. Jack jumps in with ‘Before I Forget’ by Slipknot, solidifying their varied interests.

Jumping forward to January 2016 and I rendezvous with the band back in Winchester at The Railway. Their second gig here doesn’t disappoint. The future looks bright for the five-piece, with a single due out on the 8th February (‘Early Mourning’ / ‘No Amount of Broken Wishbones’) and a constant flow of writing, Lyke Byson seem to have a good thing goin. “We’ve laid down all the parts and just getting it all mixed now,” hints Joe. Joe suggests Rick Rubin as a dream producer as he could “encapsulate the sound of any artist”. They have a lot of goals that, with hard work and determination, could be well within their reach.