There’s an air of expectancy in the National Theatre’s Dorfman, a buzz back grounded by nervous laughter. No wonder, this is the NT’s response to leaving the EU and they have made a verbatim play taken from hundreds of interviews from people of all ages and backgrounds from the UK about the issues around it. […] 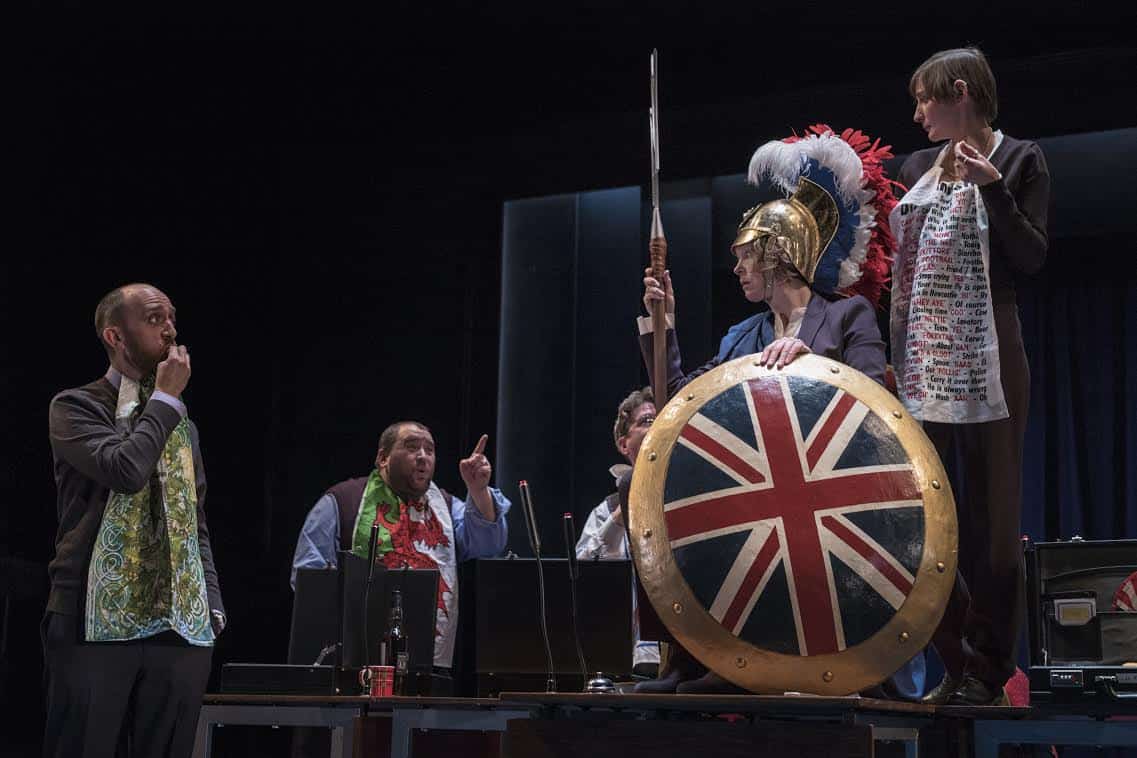 There’s an air of expectancy in the National Theatre’s Dorfman, a buzz back grounded by nervous laughter. No wonder, this is the NT’s response to leaving the EU and they have made a verbatim play taken from hundreds of interviews from people of all ages and backgrounds from the UK about the issues around it.

The stage design by Katrina Lindsay looks like any we would expect to see on an election night (except this is the EU referendum) : a tired pros arch, blue curtains, plastic ballot boxes, uncomfortable red and gold upholstered chairs that still manage to impart a sense of royalty about them. We could be in any town hall in any far-flung region of the British Isles which is still trying to maintain the idea of a civic or municipal space that serves the community.

A hush falls on the audience, the show is late going up. The Artistic Director of the NT and the director of this show, Rufus Norris, sits a few rows in front casting slightly anxious looks around the auditorium. Someone is sent to find out what it is going on. Just as she returns (almost immediately) the lights go down and the show starts imperceptibly, just as things do at  conferences.

Which is all the more fitting because this is a conference, called, as explained by Penny Layden who plays her, by Britannia, that oft romanticised female mother earth symbol of this tiny country.

Layden though makes an unassuming entrance and looks at the audience a little startled: she is caught carrying Britannia’s plastic looking helmet in a carrier bag. This is pound land Britannia then, or Britney, as named by Caledonia, one of the six reps she has summoned from the UK regions. This is the nation of cheap deal hunters that we have become.

Other reps run in to join Caledonia, all in suits and carrying briefcases. They hold up photos of the people that they are representing and slip into verbatim, as they relate, word for word and tic for tic, other people’s thoughts and beliefs, angers and pains. All the contentious topics are covered- patriotism, fishing, farming, immigration, housing- opinions and reflections come from Caledonia, The North East, Northern Ireland, Cymru, The East Midlands and The South West.

The Poet Laureate, Carol Ann Duffy, has been tasked with arranging the material to give some sort of narrative meaning and she has the reps discussing and arguing with each other whilst Norris has them jostling Britannia with their tables like petulant angry school children. Proceedings are only brought to order by a tea break invented by Duffy- a feast of the regional delicacies each rep takes out from their brief case.

The show is evenhanded and unbiased. It allows the audience to question the views put to them by invisible souls and lets us see how politics plays out in the immediate materiality. It is compassionate, sometimes, achingly so. But we have to wonder whether someone’s ideology is a beautiful lie- is the EU to blame for less shepherds and therefore a change in a how human beings directly relate to animals or is it simply down to a change in modern farming methods?

How about the woman who feels alienated because there is no one who looks like her where she lives and so imagines going to live in a place less multicultural: is it the immigrants who have ghettoised themselves, or society? Or both? Couldn’t the woman try to reach out to them or them to her?  We start to realise the complexity of such issues and see how possible it is that thoughts can sustain visions and belief systems already formed.

It is a fun night (all the actors are great and Layden does a fantastic turn as Boris Johnson) but  it is not without a very real sense of trepidation for what the future holds. “Listen” therefore is a recurring motif throughout the evening: a plea and a warning.

It is also a lament for what was and for what still could be with these fine words from Britannia: “I am your memory, your dialects, cathedrals, mosques, markets, pubs, train lines, woods, mountains”.. “I am your heartbeat.”

I may have laughed during the 90 minutes (and it is a relief to laugh about all of this) but I still left the stalls inwardly weeping and murmuring to myself “Oh England, Oh England.” I wonder how many politicians might find their way to see Our Country? If they do they might want to heed its warning.

until 22 March and then on tour